Eligible Shows for Bill's Best of 2015

For those who have been wondering, I'm a little behind this year on my "Bill's Best" list.  That's because I've been working on a special project for the Colorado Theater Guild in my "spare" time.  That project is now complete and I'm starting in on the next big task:  Bill's Best of 2015.

As usual, I'm starting by posting a list of the shows I saw and reviewed this year (90 of them; a record number of shows for me).  It's a long list, so I sorted it by company, hoping that it would be a little more user friendly.  I can also do it chronologically, alphabetically by title, or pretty much any other way Excel will let me sort it.  Just ask.  I'll provide additional lists if they're needed.

First, a note on the 90 shows I saw.  It works out to about 1 show every 4 days, all year long.  It was a marathon, and it got in the way of some of my other life priorities.  I probably won't do that again.  Please don't be offended if we decline some offers to see shows, but please keep inviting Roxie and me.  We will do as much as we can, but less than in 2015.

We took a break from Colorado Theater in May to tour the UK, Belgium, and France.  The pace of a show every 4 days or so is challenging; there were literally days when I wondered what I was thinking.  That was especially true the day in May when I stood here, in Stratford Upon Avon, and realized that we will all have our own final resting place one day.  From Hamlet:  Thou know'st 'tis common; all that lives must die, Passing through nature to eternity.  Ironically, Shakespeare, despite pointing out the inevitable banality of death, achieved a level of immortality few of us will ever see.  He's been gone 400 years this year, and he's still got his own company, his own theater, and a gift shop. 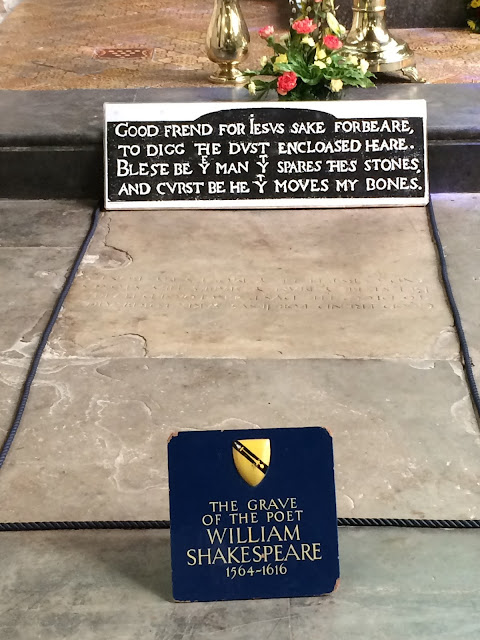 Don't get me wrong.  I'm not complaining.  I saw some amazing theater this year, but I need to cut back some.  Our days here are finite, and how we spend them defines the quality of our lives.  Theater adds immense quality to my life, but so does time with family and friends.  Traveling to new places also adds quality to life, and seeing the home of the greatest English language writer of all time was hugely important to me.  I need to get to a better mix of theater, family, friends and travel in 2016.

I have the best hobby in the world.  I get to see an abundance of outstanding theater, and I get to tell anyone who will listen what I thought about it.  This year I was also added to the Colorado Springs Independent as their free lance theater critic.  Go figure.  They pay me to do what I had been doing for free for years.  Like I said, it's a perfect hobby.  I get to do what I love, and sometimes I even get paid for it.  (OK...it's a pittance, but it's > $0.00.)

It's been an exciting, interesting, challenging, and inspiring year to sit in a darkened room when some of the best theater professionals anywhere are doing their thing.

So here's your list of 90 shows (in alphabetical order by company and with convenient links to each review) that will be considered for this year's "Bill's Best."

33.  What Color Is That Dress?, Dragon Theater Company (Original)