My Name Is Asher Lev 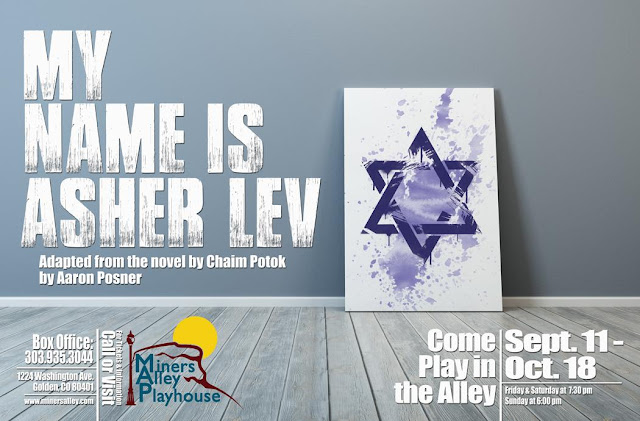 Adapted from the novel by Chaim Potok

Here’s a question to ponder as you read this review:

What do you call someone who, when faced with a dilemma, will tell a seemingly harmless lie to avoid hurting someone?

It’s a situation we have all faced; often we satisfy another with some small dishonesty instead of hurting that person with the truth.  Chaim Potok’s answer can be found below, at the end of this review.

I have not read Potok’s 1972 novel My Name Is Asher Lev.  After seeing Aaron Posner’s 2009 stage adaptation at Miner’s Alley Playhouse, I’m putting the novel on my “must read” list.  Potok’s novel (and Posner’s adaptation) is a deep, densely packed story of religion, family, tradition, suffering, art, and human values.  That’s not a full plate; it's an overflowing and spilling all over the floor plate.  It’s a very ambitious story, but the telling of it is so compelling, so engaging, and so personal that the Miner’s Alley Playhouse production seems to fly by in the blink of an eye.

Set in a Jewish community in Brooklyn in the 1950s, My Name Is Asher Lev is a story of conflicting values.  Asher Lev (played here by Curtiss Johns) has a "gift."  Even as a young boy, he had a talent for drawing, sketching, and painting.  Early on, his gift became an obsession.  He did not paint because he wanted to.  He painted because he had to.

The conflict arises because Asher Lev is an observant Jew, and when he begins to sketch nudes and crucifixions, his parents (Albert Banker plays his father and other male roles as Jacqueline Garcia plays his mother and other female roles) are aghast.  Asher could have chosen less deplorable subjects than the symbol of Christian suffering and naked bodies, but he was driven by his “gift.”  As he explained to his parents, the nudes are part of the tradition of art.  Mastering the form of the human body is an artistic prerequisite for any competent artist.  As for the crucifixions, all the great Christian artists painted Christ on the cross; Asher Lev could do no less.

The conflicts are many in My Name Is Asher Lev, and therein lies the power of the story.  Asher Lev cannot reconcile his religion with his art; nor can he reconcile his art with his parents’ values.  Despite good advice that he must choose between art and religion, he refuses.  He remains an observant Jew and yet becomes a respected artist.

Posner brings Potok’s conflicts to the stage with compelling dramatic effect, benefitting greatly from the striking beauty of Potok’s language. Director Len Matheo provides the cast with blank sheets of paper and a blank canvas and lets Potok create the images with his words. That's remarkable; this is a story about art that does not show us actual art. Using only Potok’s vivid descriptions, the audience can virtually see the beauty and the power of Asher’s Lev’s work.

Matheo’s touch is a tender one.  He keeps Asher Lev’s parents dignified and lovable despite their revulsion with their son.  He delicately stages Asher Lev painting a model; Matheo somehow cloaks her nudity with a Jewish sense of modesty.  Despite the deep divisions and the sharp conflicts in the script, Matheo keeps the tone civil and respectful.  There is no villain on Matheo's stage, only victims.

When he was interning with artist Jacob Khan, Asher Lev was advised that he must focus solely on his art, to the exclusion of everything else, to become a successful artist.  Curtiss Johns has apparently internalized that advice, as he creates a dynamic, conflicted, and compelling Asher on the Miner’s Alley Playhouse stage.  Johns is in complete command of Asher the artist, Asher the boy, Asher the son, and Asher the complex human being.  It is a striking performance, one only possible for an artist who is focused on nothing but his art.  From the time he takes the stage in the opening scene until he closes the show, Johns is spellbinding as the boy, the man, and the artist that Potok created for him on paper.

Albert Banker plays the male roles, including Asher Lev’s father Aryeh, and he does it with the zeal of a devoted father.  Banker is most convincing when he is at his most perplexed; he just cannot understand why his son Asher Lev must paint.  Banker conveys his disbelief not just with words, but with gestures and facial expressions that would disarm any skeptic.  Jacqueline Garcia has the female roles, including Asher Lev’s pensive, distraught and grieving mother Rivkeh.  Garcia plays Rivkeh as a classic Jewish mother, doting on Asher Lev but always inserting her values into her mothering.  Garcia, however, is not just Asher Lev's mother. She is also the grieving sister whose brother gave his life for his religion. Garcia's suffering is conspicuous and convincing; our empathy for Rivkeh is off the charts.

Nicole M. Harrison’s costumes are spot on; each character has the distinct look of both the period and the Jewish culture.  Using a few small items such as a scarf or a shawl, she changes the characters in seconds from a mother or a father to a model or a rebbe (not a rabbi, but the leader of a Hasidic sect).  Jonathan Scott-McKean’s set design is simple but functional, and includes a projection screen.  The projections effectively set the tone and the context at times, but more projections could have improved the story telling.  There were fairly long periods of blank whiteness between projections.

My Name Is Asher Lev is a beautifully written, piercing look at the intersection of religion and art. That intersection is littered with the shattered values that collided there. The Miner’s Alley Playhouse production set out to “get it right.” They do. They have scattered Potok's emotional debris all over their stage. This is one of those theater experiences that you won’t soon forget.

It’s time to answer the question I asked at the outset:  what do we call someone who would compromise his or her values to satisfy another?  Chaim Potok and Aaron Posner say that person is a WHORE.  Your answer may differ, but the point is clear.  If you would trade your integrity to please your family or a friend, your moral ground may be quicksand rather than concrete.  Art cannot be built on quicksand; nor can life.

Asher Lev is not a whore.  He refuses to surrender his values to please anyone.  Nor are there any “whores” in this production.  There are only capable, talented artists who have created a poignant gem of a show by telling a difficult truth:  a great artist must be painfully honest, and he or she must accept the consequences of that honesty.

Free parking is available behind Miner’s Alley Playhouse and on surrounding streets.

There is brief partial nudity, but I doubt very much that anyone would be offended by it.  In fact, I would say that this show is suitable for children.  However, younger children unfamiliar with the Jewish faith and culture may not be able to follow some of the references very well.  Further, the themes (I’m speculating here) may not interest children under the age of 12.

The program includes two pages of “Asher Lev Lexicon.”  It explains some of the Yiddish terms used in the script.  For those unfamiliar with Yiddish terms, it is a very helpful read before the show starts.

We were running late.  In a last minute attempt to find something to eat before the curtain went up, we spent 10 minutes or so at Jimmy John’s at 1299 Washington Avenue.  It’s a 2 minute walk to or from the theater, and as they say, it’s “freaky fast.”  It’s definitely not gourmet food, but basic subs made with quality ingredients.  I had low expectations which were totally exceeded.  Tasty, quick, and inexpensive.  In a rush, I’d go there again.