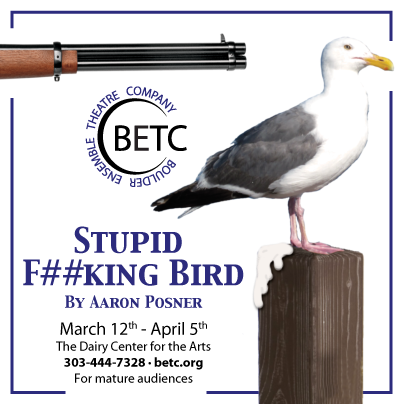 Playwright:  Aaron Posner, based on The Seagull by Anton Chekov.

I’m going to start here with the bottom line.  You don’t have to read this whole review to get the message.  Stupid F##cking Bird is an amazing experience that I recommend to anyone who cares about theater and who can deal with the coarse language.  The acting, the direction, the staging, and literally everything else about Stupid F##king Bird are all splendid.

Since I started with my conclusion, it's pretty clear that I am deviating somewhat from my customary format.  By that, I don't just mean that I gave you the bottom line at the top.  I have listed the cast and crew members below, as is my custom, but for Stupid F##cking Bird, I’m not going to go into detail about the production and individual performances.  Stupid F##king Bird is about ideas; the characters are vivid and engaging, but it is the message that matters.  Besides, the individual performances were uniformly magnificent.  Enough said.

So which is the better argument?  Stupid F##king Bird will make you both think and laugh about the question.  Ask yourself whether revolutionaries can be successful artists by destroying what came before.  And ask yourself whether profitable art enterprises are doing anything creative, or are they just about making money off the masses.  Indeed, ask yourself if these questions even matter.

Aaron Posner’s update to Chekov’s 1895 script is a spot on take down of the folly of both arguments, an irreverent poke in the eye of artists and theaters alike.  Take the tradition of the 4th Wall.  That imaginary barrier between the cast and the audience has a purpose; it separates the reality of the audience from the fictional story on the stage.  Posner doesn’t just take down the 4th Wall.  He smashes it, multiple times, engaging the audience directly and repeatedly.  It’s disconcerting, but it’s one of Posner’s ways of shocking the audience into challenging their assumptions about theater.

To say that Posner takes down contemporary theater might be an understatement:

…what they’re doing to Shakespeare these days to make him “accessible”…and the tiny, tepid, clever-y clevery-y clevery-y little plays that are being produced by terrified theatres just trying to keep ancient Jews and gay men and retired academics and a few random others who did plays in high school trickling in their doors…

While the skewering of contemporary theater is my takeaway from Stupid F##king Bird, I don’t want to leave readers with the impression that it is the only theme here.  Also on the menu are life, death, love, relationships, and personal failure.  All are valid topics, certainly, but they seem tangential to Posner’s central point about theater.

The structure and tone of Chekov’s original work is intact, and Posner’s updated
contemporary characters ring true.  Con (Luke Sorge) is the artistic revolutionary; and he has the first line in the show as he stands with the rest of the cast downstage.  To avoid spoiling his first line, I will just say that Con marks his alpha male artistic turf with his first words to the audience.  Con is determined to change the world in the first act, but by the end of the play he is depressed, broken, and suicidal.  He also has a new respect for the old forms.

The second act is kind of a kitchen table confessional.  The set completely changes from the first act; we are now in the kitchen, where the cast comes to bare their souls.  Mash (Rebecca Remaly) starts it off with a song on her ukulele (lyrics by Posner), lamenting that “the best that life can offer me is more of the worst.”  The maudlin, melancholy lyrics are laughably lame, but Remaly’s sweet voice makes them listenable.  Remaly makes her sincere confession in the kitchen:  “we’re cosmically screwed.”  She’s lost in life; perhaps we all are.

Stupid F##cking Bird is highly unconventional; the plot is based on the creative process, with characters that are straight out of central casting.  Mash is a woman whose unrequited love leads her to settling for second best.  Con is the struggling writer.  Nina  (Jaimie Rebekah Morgan) is the eye candy actress with more ambition than talent.  Emma (Diana Dresser) is the self absorbed diva.  Dev (Ian Anderson) is the geeky but lovable romantic.  Sorn (Bob Buckley) is the aging doctor, facing his own death.  Trig (Brian Gregory Shea) is the commercially successful writer and womanizer who is owned by his benefactor.

It’s difficult to overstate the talent on the BETC stage for Stupid F##king Bird.  The performances are striking in their sincerity and their profundity.  You will rarely see actors as engaged and focused as those in Stupid F##cking Bird.  These are creative, dedicated theater people challenging their own assumptions, biases, and perhaps even their own life choices.  As such, it’s a rare opportunity for them, and they make the most of it.  You cannot take your eyes off any of them.

Posner’s point may well be that the creative process is something of a corollary to the First Law of Thermodynamics.  That Law declares that energy can neither be created nor destroyed.  It can only change form.  A burning log appears to be destroyed; in truth it is transformed into heat, smoke, and ash.  Likewise, art, including theater, rarely creates anything new, nor should it be expected to do so.  Rather, it transforms an ordinary item or experience into something extraordinary.  Whether that transformation is popular enough to be profitable is immaterial.  What matters is the process itself, bringing us new perspectives on items and experiences that we all share.

Stupid F##king Bird is Exhibit 1 for what might be called Posner’s First Law of Theatrical Dynamics.  Nothing is created or destroyed here, but Chekov’s The Seagull is transformed into an entertaining, thought provoking indictment of contemporary creativity and theater.  With a title like Stupid F##king Bird, Posner seems unconcerned about commercial success.  His focus is on making us see something new, something useful, something important in Chekov’s classic.  For those who are wondering if it works, it does.  Marvelously.

As I stated above, this is an excellent cast, working together as a sincere and talented ensemble, in a marvelous production of a show that is about important ideas.  That, it seems to me, is all you need to know about Stupid F##king Bird.

Now go get a ticket.

This show contains coarse adult language, suicides themes, and adult situations.  Recommended for teens and up, but with parental discretion.

There is ample parking on surrounding streets and behind the theater.  If that is not adequate, BETC has arranged for overflow parking at 2505 Walnut Street, just north of The Dairy Center for the Arts.

Rather than give you my recommendation, I’m going to pass on the BETC recommendations.  These guys/gals are natives to Boulder.  I’m just a frequent visitor.  Here’s what they recommend:

The Med.  Delicious tapas and the pre-show happy hour specials are a great deal!  Their Happy Hour from 3:00 PM to 6:30 PM everyday is one of the best in town. Three words: Sangria and tapas.

The Kitchen Next Door.  The food is date-night quality, but the prices and menu choices are family-friendly. Best of all, on certain nights, a cut of the restaurant's sales go to help Boulder County kids learn how to garden!