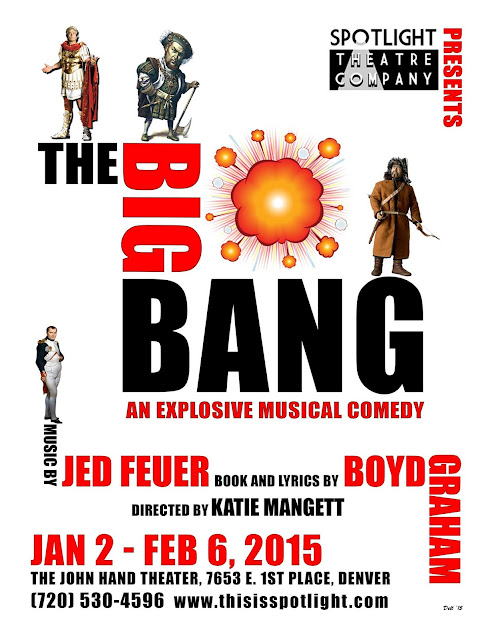 To be clear at the outset, The Big Bang:  An Explosive Musical Comedy (hereafter The Big Bang) is not a stage version of the wildly popular TV show.  You won’t find nerds, geeks, and astrophysicists struggling with basic social skills.  Rather, The Big Bang now showing at the John Hand Theater is a clever, witty, and enormously funny pitch for a Broadway musical that covers the entire history of the universe.  If you think that sounds a tad ambitious for a Broadway show, you would be right.  Few would even dream of scripting a 12 hour show spread out over 4 days in 3 hour increments.

But that’s exactly what Big Bangers Boyd (Ben Hilzer) and Jed (Joe von Bokern) set out to do.  “Boyd” & “Jed” just happen to be the first names of the writers of The Big Bang, so it’s probably not a coincidence that those are also the first names of the main characters. Parts of the script may be autobiographical.  If so, Graham and Feuer may actually be serious about bringing this script to Broadway.

The Big Bangers set out to convince their captive “investors” that they should shell out $83.5 million to put their show on a Broadway stage.  Hilzer and von Bokern enthusiastically pitch the show with excerpts from the draft, and frankly, the draft is pretty darn good.

One of the earlier bits has Hilzer as Adam and von Bokern as Eve, reenacting their glory days (“Free food and frontal nudity”) until Eve is tempted by the serpent.  It’s witty, it’s creative, and it’s extremely funny.  Hilzer follows with a spectacular drag performance of his own, showing us the Egyptian queen Nefertiti in “Viva La Diva.”

It’s all in good fun, and at times, it’s also thought provoking.  There’s a skit with Hilzer and von Bokern playing the mothers of some difficult children:  Jesus Christ and Mahatma Ghandi.  Parenting a divinity or a world leader is evidently much harder than one would expect, and way funnier as well.

Hilzer and von Bokern meander through the historical highlights covered by the potential Broadway production, from the lions entertaining the Romans at the Coliseum to Spanish Queen Isabella financing Christopher Columbus...and beyond.  It’s a hilarious romp through skewed historical moments, all played for maximum comedic punch.  Both Big Bangers make inventive use of various set pieces for props (Beki Pineda handles the props), but it’s Hilzer who gets the biggest laughs for his creative use of a clock.

This is a musical, and Blake Nawa’a’s fingerprints are all over the production.  He’s not just the musical director; he’s a full time onstage presence and a lurking background character.  He’s also the piano player, keeping the soundtrack moving forward even when the audience is laughing so loudly he can hardly be heard.  Hilzer and von Bokern carry the vocals which have some tricky lyrics and faithfully execute Christian Munck’s choreography.  Both Big Bangers have strong voices; while not miked, they had no problem projecting to the packed house.

Director Katie Mangett is on a roll; her last comedy at the John Hand was the highly successful farce The Foreigner.  Now she’s got lightning in a bottle again with The Big Bang.  She’s got her cast timed perfectly; the punch lines are delivered like a boxer's hooks and jabs directly to the funny bone.  Susan Rahmsdorff’s costumes run from basic (both Big Bangers spend a fair amount of time in their underwear) to inspired (what she does to turn props into costumes is amazing).  Bernie Cardell’s set design is detailed and functional, providing Hilzer and von Bokern everything they need to sell the unlikely plot of The Big Bang.

The sell out opening night crowd responded with a extended standing ovation, and for good reason.  The Big Bang is high energy, non stop musical hilarity.  It’s not Sheldon and the gang.  It’s better.  There’s no laugh track at the John Hand Theater.  What you hear is real people and real laughing at precision physical comedy and witty tomfoolery.

Big Bang is suitable for all ages, although younger kids may not get some of the humor.  I think the term “politically incorrect” applies here.  The cast skewers nearly every possible ethnic group since the beginning of time, and there are some irreverent references to religion.

There is ample free parking in the lot just to the east of the John Hand Theater. Concessions are available and can be consumed in the theater. 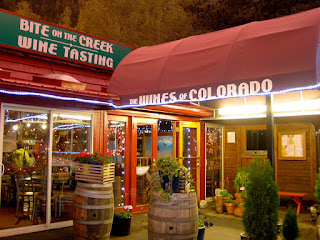 My son Dan and his family spent the day with us, so we had a late lunch at Wines of Colorado in Cascade before hitting the road to Denver.  It was a good plan.  In good weather (think the 3 warm seasons in Colorado), it’s usually a busy place with a 15-30 minute wait for a table.  That’s because Wines of Colorado has awesome creekside outdoor tables.  That creekside experience, combined with an interesting menu and a fabulous selection of Colorado wines brings the crowds daily during the al fresco seasons.

It’s one of our favorite local spots, and whenever we have out of town company we try to take them to The Wines.  Highly recommended, and only a few minutes west of Colorado Springs. 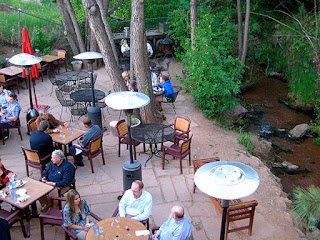