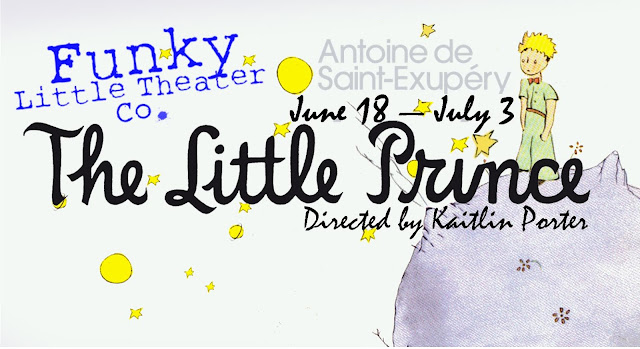 ("One sees clearly only with the heart. What is essential is invisible to the eyes.”)

Antoine de Saint Exupery’s The Little Prince is a classic children’s story.  First published in 1943, it is one of the best selling books ever, and still sells about 2 million copies a year.  Saint Exupery’s tale is not just a children’s book; it’s a multi-layered story that offers profound observations of the human condition.  Whether you’re an adult or a child, The Little Prince is a moving, charming, and inspiring story for all.

Cummins and Scoullar’s adaptation is true to its source; the English translation and the dialog tracks the novella closely.  Funky Little Theater’s production is spartan in appearance, forcing us to use our imaginations rather than detailed set pieces.  The set is simple, props are limited to a model airplane, some plants (baobobs, of course), and some roses. The costumes are equally simple; the Little Prince is all in white with a red scarf.  With very few visual cues, Funky Little Theater tells this story with their hearts, even though the story may sometimes be invisible to the eyes.

Any production of The Little Prince must start with the title character.  Funky cast Evan Slavens as The Little Prince, and it’s hard to imagine they could have found a more suitable actor anywhere.  Slavens is only a 7th grader at Eagleview Middle School, but he has some heavy duty acting experience, including Ludlow, 1914 at Theatreworks and The Wizard of Oz at the Colorado Springs Fine Arts Center.

The most basic requirement for any actor is to learn his or her lines, and Evan knows every one of his lines, what each one means, and he knows the nuances of those lines.  He is onstage nearly the entire 90 minutes of this show, and he has more lines than any other actor on this stage.  He never missed a mark, never missed a cue, and never dropped a line.  He was, in fact, formidable, holding his own among the “grownups” sharing the stage with him.

It’s not often I get the chance to say this, but if you have children, take them to see Evan Slavens in The Little Prince.  Not only will they benefit from seeing Saint Exupery’s story play out in real time, but they may also be inspired by what one of their peers can do on the Funky stage.

Chris Medina (Aviator) serves as the adult in the room, narrating the story after crashing his plane in the Sahara Desert.  Medina clearly loves telling this story.  His chemistry with Slavens is authentic.  They start the show as strangers, but finish with a love as strong as any parent and child could have.  My favorite moment is near the end of the show when Medina scoops The Little Prince up in his arms and carries him off.  It is as tender a moment as I’ve seen on stage in some time.

The ensemble here has some excellent moments as well.  Kailey Gillen, as the fox, teaches the little prince how to tame a wild animal, and that he is responsible for any animal he tames.  Gillen is charming, going from wild to mild for the little prince.  Autumn Silvas gets center stage at a crucial moment; she’s the snake who bites the little prince.  She does it with zeal, nearly devouring the little guys’ arm.

Director Kaitlin Porter has a fine cast, and she has emphasized the child like qualities in each of their characters.  She cast women in the ensemble, even though that requires them to play men at times (especially Gillen, who plays a king).  That results in a few awkward lines, but reinforces the innocence of children who don’t see gender roles as strictly as grownups.  Blocking at stage left and stage right are problems at Funky, as the lighting is poor at those locations.  There were times when actors were in some level of darkness.  Porter might want to move their marks closer to center stage.

There is ample free parking in the strip mall parking lot at the theater.

Funky Little Theater serves the entire community.  The performances on June 25, 26, 27, & 28 will feature American Sign Language (ASL) interpreters for the deaf/hearing impaired.  That is pretty unusual in my experience, and Funky gets a lot of credit for reaching out and accommodating those who might not otherwise be able to appreciate The Little Prince.

This show is suitable for all ages, and highly recommended for kids of all ages.