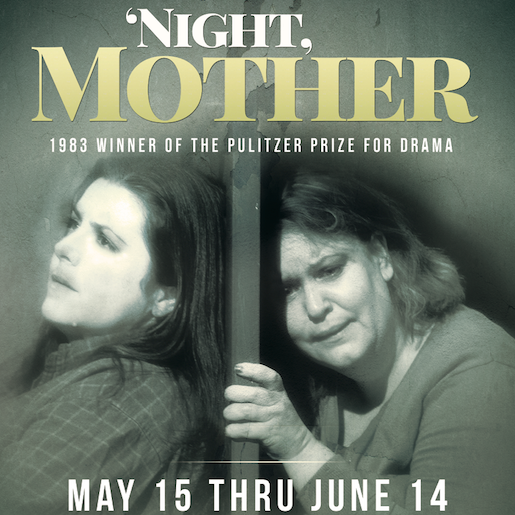 There’s absolutely no question about it.  ‘Night Mother is a superb production of a masterpiece of a script, starring two of the best actors you will find anywhere.  The critics are in complete agreement.  See for yourself, here, here, and here.  I’m not competing with these reviewers.  I’m endorsing them.  They are 100% right about ‘Night Mother.  It’s a bona fide hit for Vintage Theatre.

One of the advantages of linking to other reviewers is that I don’t have to worry about spoilers now.  ‘Night Mother is about suicide, and it’s no secret.  The two women in the cast are reduced to just one by the time the curtain comes down.

Emma Messenger (Thelma) and Haley Johnson (Jessie) are magnificent.  There is no dispute from anyone who saw ‘Night Mother.  These two actors are mother and daughter, protagonist and antagonist, with a universality that helps us see ourselves in them.  They have created an absolutely magnetic connection to the audience, sucking us all into their tragedy.  Messenger and Johnson bring the heat and the light to ‘Night Mother, leaving us emotionally and physically drained as we shuffle out of the theater.  You may never see better performances on any stage.

Billie McBride’s direction is spot on.  The script is a runaway train, headed for certain disaster.  McBride slows the train down, inserting pauses and turning the inevitable train wreck into a slow motion emotional autopsy of the victims.  Marsha Norman’s Pulitzer Prize winning script is a story telling gem.  McBride tells that story with real conversation between real people.  Her direction gives Norman’s words a natural, painful, and poignant pace that forces the audience to deal with the unimaginable events on the stage.

“Night Mother” is unforgettable theater.  The Vintage production is required viewing for any and all who value live theater.  Period.  End of story.

That said, though, rather than pile onto what other reviewers have already written about this production these performances, I want to focus on the issues raised by Norman’s script. We tend to think (OK, at least I tend to think) that those who commit suicide have serious emotional and/or mental issues.  Suicide is not rational, so those engaged in it must not be rational.

Norman blows up my preconception.  Jessie is rational.  She is logical.  She is not insane, nor is she coming from a place of emotional rage.  She is tired.  She sees no way to improve her life.  She has an answer for every objection Thelma throws at her.  She will not be dissuaded.  Suicide is the logical solution for Jessie, and her time for action is now.

Jessie:  “I know that. So it's really just a matter of where I'd rather be.”

Sitting in the audience, I found it highly disturbing to hear such a simple, logical, reasonable argument for suicide.  It shatters my preconception that suicide is not rational.  Norman’s script presented me with an alternate universe, one in which the preservation of life is not always the best solution to a problem.

As disorienting as that is, it’s also very instructive for those who are left behind after a suicide.  We often wonder what we could have done, should have done, to help someone who abruptly left us.  Ideally, we would have had the conversation that Norman has given Thelma and Jessie in ‘Night Mother.  We would sit down with our loved one and rationally explain why he or she should choose life rather than death.  In a perfect world, we would be able to dissuade that person.  We would literally save his or her life.

I doubt that many get the chance to have that discussion.  Those who are on a path to self-destruction are reluctant to share their plan with others.  To the extent that anyone regrets not having done more to intervene, Norman shows us the futility of intervention.  Once a final decision is made, efforts at intervention and prevention are rarely effective.  Norman’s script may give some grieving mothers, fathers, sisters, brothers, and friends some relief from their self imposed guilt.  A determined individual can nearly always carry out his or her plan, despite our best efforts.

Thelma is rocked when she discovers the shocking inevitability of Jessie’s plan, but she knows it's true:

Nothing she can say or do will change the outcome.

Whether Jessie’s suicide is justified is ultimately her call.  We all have complete control over how we live our lives, and whether we want to live them at all.  Most of us will live full, rich and rewarding lives.  Some of us won’t.  Some of us will make choices that seem irrational, unwise, and even fatal.  Jessie carefully and thoroughly considered all her options, and chose the one she deemed best.  We may disagree with her choice, but for her, at least, it was the only one that solved her problems.

Theater is a very special art form.  We can sit in a room where talented artists entertain us, or, as in ‘Night Mother, teach us about our world and about ourselves.  We can see ourselves in the mirror Marsha Norman has held up to us.  We can see ourselves in the characters Emma Messenger and Haley Johnson so painfully portray a few feet in front of us.  These are living, breathing people in crisis, and we can barely stand to watch what we all know is coming.  We squirm, we wince, and we resist the inevitable.  But we can't stop it.

'Night Mother is a stark, compelling, and sometimes frightening reminder of why we go to the theater.  We come out better for the pain we endured watching a life ending before our eyes.

Discretion is advised for all, but especially for adults whose lives have been touched by suicide.  This show may be a very difficult experience for anyone who has lost someone who could no longer bear the burdens of his or her life.

My best friends, who shall remain nameless, lost their adult daughter a few years ago.  Losing a child is a devastating experience, one I hope I will never have to endure.  If, though, for some reason, that experience is visited upon me, I will benefit greatly from having vicariously known the grief of my friends…and from the the gift that Emma Messenger, Haley Johnson, Billie McBride, and the entire staff at Vintage Theatre gave me on Saturday night.  It's a gift I will carry with me and cherish forever.

There is ample free street parking parking near the theater.  There is also parking in the adjacent lot, but check the posting at the front door for restrictions.

We had an anniversary dinner at The Keg Steakhouse & Bar, 1890 Wynkoop Street, Denver CO, 80202.  It’s about a half hour drive to the theater, but for special occasions, The Keg comes through with flying colors.

Our server, April, was fast, friendly, and efficient.  She knew it was our anniversary, and provided a complementary dessert.  The manager also came to our table, to check on the food and to wish us a happy anniversary.  I had the prime rib, which is their specialty.  It’s only available in medium rare.  EXCELLENT.

The Keg (the chain is from Vancouver BC) is a little different from other upscale steak houses; it’s not an a la carte restaurant.  You actually get a potato choice with your entree.  It’s fairly expensive, but I guarantee you will love your meal and you will NOT leave hungry.