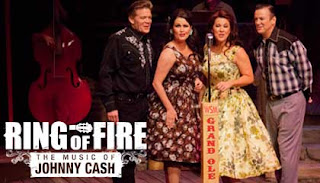 Those who must see this show include 1) Johnny Cash fans, 2) fans of classical country music, 3) fans of musicals, and 4) all the rest of us.  I haven’t been mistaken lately for number 1, 2, or 3.  Even so, I enjoyed this production immensely.

This is one of those musical hybrids; it’s not exactly a concert and not exactly a traditional musical.  There is a story, but it’s bare bones and doesn’t tell us much we didn’t already know about The Man in Black.  That’s fine; Cash’s music can easily carry the show regardless of the storyline.

The cast doesn’t have characters; it has “principals” and an “ensemble.”  That’s because there is no defined Johnny Cash character on stage…the principals take turns singing and playing his music.  It’s an interesting approach.  The show is not about impersonating Cash.  It’s about bringing his music to life with different voices.

In truth, the “principals” and the “ensemble” form a seamless group of musicians, singers, dancers, and actors making the Cash classics meaningful again.  It has to be said; there is a wealth of talent on this stage.  There’s not a vocal, instrumental, or acting weakness in any part of the show…never even a single note out of place.  It’s exactly what Cash would have wanted:  a toe tapping, foot stomping celebration of the man and his music.  All the hits are there:  “Ring of Fire,” “If I Were a Carpenter,” “Five Feet High and Rising,” “Daddy Sang Bass,” “I’ve Been Everywhere,” “Cry, Cry, Cry,” “Folsom Prison Blues,” “I Walk the Line”…well, you get the idea.  Johnny Cash’s Greatest Hits.

All the technical parts here work well; the sound/light design produced the best indoor thunderstorm I’ve ever experienced.  Costumes (or is it clothes?) make the man, and The Man in Black was decked out just as we remember him.

The music is great, but I think the real strength of this production is the careful, if sparse, narration of Cash’s story.  It’s the classic American success story:  rags to riches starring a flawed hero who dealt with his demons every day of his life.

When Cash was young, he lost a brother to an accident involving a power saw.  The Mississippi River flooded their farm and forced the family to flee.  Pulled back from the brink by a Federal Rural Relief Program, the family got 20 acres, a home, a barn, and a mule for nothing down and no payment until the first crop was in.  These were very humble beginnings for a guy who rose to the top of his field, and they make for a compelling narrative to the music.

So for me, this show was an unqualified success.  I fully recommend it to any and all who want a couple of hours of rocking entertainment about a guy who is an American original.  It’s a couple of hours you will totally enjoy.

NOTE:  This is a family show, and is recommended for children ages 6 and up.  The Denver Center encourages families to attend together. 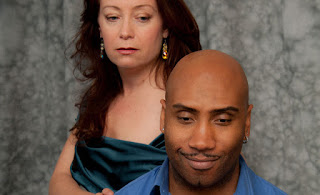 “Six Degrees of Separation” is Vintage Theater’s final production at their 17th Street location.  The company is moving to a new location in Aurora in the near future.  Follow them there (new space is at 1486 Dayton Street, Aurora).  Vintage is one of the premier theater companies in the Denver area, and you won’t be disappointed at any location where you can catch them.
Since this is the last Vintage production in their current home, it is also Vintage’s final effort to deal with the substantial limitations of such a small venue.  I am always amazed at how well the cast and crew use the tiny stage to great effect.  “Six Degrees of Separation” is no exception.  More limitations require more creativity, and Vintage is always delightfully creative within their own limited space.

The plot is based on a true story about a con man in the early 1980s who assumed the identity of Sidney Poitier’s son.  He used the ruse to defraud some rich Manhattan residents, including Melanie Griffith, Calvin Klein, and Gary Sinise (none of whom appears in Guare’s script).  Needless to say, the guy was very good at what he did.

If you’re not familiar with the concept of “six degrees,” it’s pretty simple.  We’re all connected, and that connection can be established with “friend of a friend” links to six other people.  Does it actually work?  Not always.  Does that really matter for this script?  Not really.  What does matter is the concept that we are ALL connected, no matter how close or how remote the connection.

Strong performances from Lisa DeCaro, Josh Hartwell, and Theo Wilson anchor the production.  Wilson’s con man is smooth, shameless, and clever in all the right ways.  Hartwell and DeCaro are “victims” of the con, and are also shameless in their own right.  Hartwell’s character is an art “dealer,” whose wealth is dependent on his ability to con his buyers. That he is a then victim of a con is both ironic and cathartic.

The set is functional, and given the space limitations, that isn’t easy.  The set included a veiled second level bedroom.  It worked perfectly for the brief but critical bedroom scene.
I quibbled, though, with some of the director’s choices.  The opening scene, for example is so frenetically paced that it loses some of its impact.  Instead of quickly engaging the audience in the story, I was left wondering what was going on.

I also thought it peculiar that a couple of props (an inkwell, a painting of a dog) were not onstage.  They were planted in the audience.  Each time they were used, an offstage crew person stood up in the audience to display them.  It took the focus off the actors and moved the focus into the audience.

These are small quibbles though.  This is a marvelous script, done by a talented cast and crew, in one of the most intimate spaces around.  I would definitely recommend “Six Degrees of Separation” at the Vintage Theater to any theater fan who hasn’t already seen it.

NOTE:  This is not a family show.  It includes adult themes, some vulgarity, and some nudity. 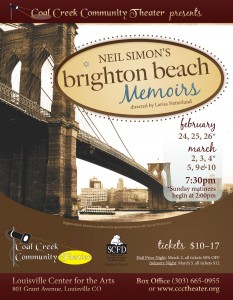 Set in 1937, “Eugene,” the young teenage boy tells a story about growing up, about girls, boys, family, and what “principles” are important in this family.  The story combines both drama and comedy in equal measure, with strong characters dealing with real family issues.

The venue, the Louisville Center for the Arts, is small.  Very small.  And it has some physical limitations that make performing there difficult.  That said, though, this production overcomes those obstacles, making excellent and creative use of a the space.

I have seen this play once before, but this production stands out for its very strong female characters.  Kate (Susan Meylor) and Blanche (Erica Sodos) are excellent as sisters in stress, as mothers in distress, and as actresses on a mission.  They bring convincing, accurate, and powerful performances to the Louisville stage.

The show features some excellent teenage actors as well.  Eugene (Zachary Ellison) ties the story together with a charming coming of age tale.  Nora (Shaina Levinson) is the pampered little sister, a role she clearly knows something about.  And Laurie ( Jordyn Morgan) is every boys teenage fantasy…even if she turns out to be your cousin.

The set, in the somewhat difficult performing space, works very well.  The costumes are excellent; Blanche’s dress for her “date” was perfect.

This is a family show, although families should be prepared for some teenage boy sexual chatter.  Perhaps a PG-13 rating would be appropriate.  That aside, the “family values” message here is an appropriate one for all families, and I would encourage everyone to bring the family.  Brothers, sisters, sons, daughters, and grandparents will all enjoy this show.

"And Things that Go Bump in the Night"

“And Things that Go Bump in the Night” 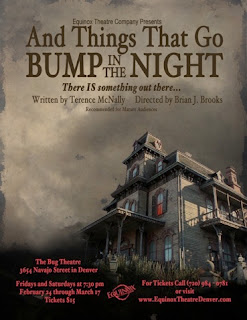 Terrence McNally is an accomplished playwright.  His repertoir includes “Kiss of the Spider Woman,” “Lips Together, Teeth Apart,” “Love! Valour! Compassion!” and “Ragtime.”  He has four Tony Awards.

And then there’s “And Things that Go Bump in the Night.”  McNally acknowledges that the reviews of his first play were not very good.

"I've never felt like a critics' darling," he says, quickly summoning a memory from 45 years ago of the drubbing of his first Broadway play, "And Things That Go Bump in the Night." It opened April 26, 1965 and closed 12 days later. "I thought the reviews would say, 'flawed, uneven, by a vital, talented playwright,' " he recalls. "But one said, 'It would have been better if Terrence McNally's parents smothered him in his cradle.' Actually, two reviews of my first play mentioned my death."

Given those reviews, I don’t feel awkward saying that the Bug Theatre’s current production of “And Things that Go Bump in the Night” is beyond disappointing.  As a fan of some of McNally’s other works, I had high expectations.  Those expectations were dashed quickly at the Bug Theatre.

Even so, a bad script can often be salvaged by a creative production and distinguished performances.  Not here.  While there’s no question that the cast, crew, and director put their hearts and souls into the production, there is no salvaging this script.

That said, this performance suffered a serious failure of its tech props.  Part of the story is told on a short film in the second act.  The projector flickered and the sound crashed repeatedly.   Seriously, I half expected the director to stop the show at that point, apologize for the problems and offer refunds.  Again…high expectations were dashed.

Having some sense of charity, I think it best that I dwell no further on the story, the characters, the actors, or the production.

If you have nothing else to do, perhaps you would enjoy “And that Things Go Bump in the Night.”  I certainly hope so.  But for me, the experience was, as we say, “unforgettable.”  And not in a good way.