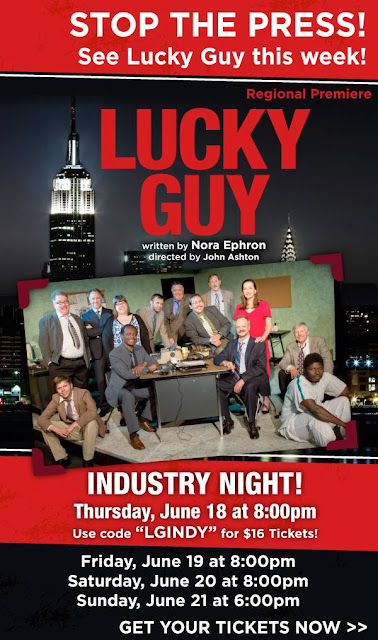 Mike McAlary was a real guy, and he was the “lucky guy” of the title.  He got his career dream job as a columnist for several New York City newspapers.  McAlary’s story is truly one of those “be careful what you ask for” tales; being lucky doesn’t always translate into being happy.

Nora Ephron, whose film credits include When Harry Met Sally and Sleepless in Seattle, wrote this script, telling the true story of how a sportswriter became the voice of New York tabloids for more than a decade.  Lucky Guy was nominated for six Tony Awards 2013, and won in two of those categories (Best Featured Actor, Best Lighting).  Lucky Guy was Ephron’s final work; she died about a year before it opened on Broadway.

The story of Mike McAlary’s career covers his early years, working the police beat and socializing nightly with the other news guys at various Irish taverns.  Ephron has given McAlary (Andrew Uhlenhopp) a couple of journalism mentors in Hap Hairston (Dwayne Carrington) and John Cotter (Wade Livingston).  The setting is the period from 1985 to 1998, when McAlary died of colon cancer at age 41.  It’s a time before, and during, the emerging 24 hour TV news cycle, and it’s a time when news columnists (notably, in New York, Jimmy Breslin) were required daily reading for millions of New Yorkers.

Ephron used a couple of Irish drinking songs to illustrate her story, the best of which is Isn’t it Grand? (“the longer you live the sooner you’ll bloody well die”).  The news guys gather nightly at the pub, drinking and singing.  Isn’t it Grand? is reprised several times during the show, and each time we hear it we realize that they’re singing about McAlary.  Whether he’s deliberately self-destructive or just one of those shooting stars that burn out before hitting the ground, it’s apparent that he’s unlikely to die of old age.

The Edge Theater production is ambitious; with a three piece set (McAlary’s home, the newsroom, and the bar, designed by Christopher M. Waller) and a cast of fourteen, there’s no room for error on the small stage.  Director John Ashton has made excellent use of video here, both to set the stage and to break into the script with news updates.  Ashton has somehow managed to put 9-10 actors in a small section of the stage (the bar) while maintaining a sense of ample space for all.
Andrew Uhlenhopp’s McAlary is witty, wise, reckless, and always focused on getting to his next big thing, whether that’s a scoop or a promotion.  Uhlenhopp strikes a perfect balance; we're not sure if we should root for McAlary or fear his ambition and recklessness.

Cotter (Wade Livingston) gives McAlary an important piece of advice:  reporting is NOT about the 5 w’s (who, what, when, where & why) you learn in journalism school.  Cotter teaches him that there’s only one truth in any story, and to get it, you go to the morgue and count the bodies.  “Everything else is open to interpretation.”  That’s both a cynical and a sadly accurate assessment of journalism, and Livingston's sincere delivery reveals the fairy tale of objectivity we expect from reporters.  Uhlenhopp and Livingston have a  healthy respect for each other as actors, and it shows.  They click.  They are always and completely credible.

Dwayne Carrington is Hap Hairston, McAlary’s editor and mentor.  Carrington brings his gravitas to managing the herd of cats that is Mike McAlary.  One wouldn't envy Hairston’s difficult task, and Carrington gives us the head scratching, arm crossing, deep sighing performance that fully conveys his frustration with his friend and subordinate.  This may not have been Carrington’s best outing; his timing seemed off by a half a beat at times.  Still, the bond between Carrington and Uhlenhopp was a special one here, and it is so genuine that you can’t take your eyes off either of them when they are onstage.

Abby Apple Boes (Alice McAlary) and Lara Maerz (Louise/Debby) are talented actors, but both are sentenced to roles that provide little challenge.  Ephron apparently wrote Lucky Guy literally for the “guys;” the women in the show get few lines and minimal development.

The cast, the direction, and the technical crew here hit all the right notes.  This is a rock ‘em sock ‘em, gritty production of an excellent script.  Ephron has a message for us in Lucky Guy, and The Edge drops that message on us like a ton of bricks.

What kind of guy was McAlary?  He was able to get people to talk to him, which gave him an opening into many of his stories, but he alienated powerful people in the process.  He was adept at exposing corruption at NYPD, and there are often consequences for calling out cops.  One of the corrupt NYPD officers McAlary exposed committed suicide the day after he interviewed him.  In the end, whether McAlary was a hero or a villain depends on your point of view.  The only truth in McAlary's story may be the body count.  The rest is open to interpretation.

Being the most successful columnist in New York City also had rewards, including lucrative paydays and a Pulitzer Prize for Commentary.  The story that won him the praise and the Pulitzer Prize was his coverage of Abner Louima.

Louima was a Haitian immigrant living in New York City when he was brutalized by NYPD police officers.  The details are too brutal and gruesome to go into in a review, but if you’re unfamiliar with the matter, you can find the details here.  McAlary’s writing exposed the NYPD officers, a number of whom faced criminal charges.  One of those officers, Justin Volpe, was sentenced to 30 years in prison, without parole, for his part in the torture.  He is due to be released in 2025.  A civil lawsuit against the NYPD resulted in a multimillion dollar settlement for Louima.

The Louima case, and McAlaray’s exposure of it, was the pinnacle of his career.  The play correctly portrays him as leaving his chemotherapy treatment to interview Louima.  It’s a heartbreaking scene; Louima (Andre Hickman) recounts the sordid details to McAlary as he is recovering from his injuries.

Ephron’s script and The Edge do justice to McAlary and Louima, but it’s a difficult story to watch.  The audience sees McAlary as endlessly immersed in seediness, finding and fanning flames of corruption, evil and power for his own ends.  That he won a Pulitzer Prize as a result of the savagery visited upon Mr. Louima seems at once ironic and repugnant.  If ever anyone was unjustly enriched by another’s suffering, it was Mike McAlary.  That the criminals in blue were brought to justice because of McAlary is some relief, but no court can ever bring justice to Abner Louima.

McAlary specialized in exposing the dark side of society and the depravity of some of the people we are taught to trust.  For that reason, I cannot help but appreciate what McAlary accomplished.  At the same time, however, I cannot help being appalled and horrified by the darkness that he found and showed us.

Ephron calls her script Lucky Guy.  Whether McAlary was a “lucky guy” is debatable.  He was a "successful guy" who made a career of swimming in the deepest, most putrid waters of a moral sewer.  That he won a Pulitzer Prize was not luck; it was reliable informers, a cooperative victim, hard work, and sensational writing, but it was not luck.  He died at 41 of cancer, which, in my world, makes him an “unlucky guy."

Ephron and The Edge are doing something very important here.  This is a true story; one that made me squirm.  It jumbles the journalistic ethics.  It makes crime pay for McAlary.  But mostly it forces us to look at a part of our world we’d rather not see.  We look in a mirror at Lucky Guy and shudder.  The harder it is to look in that mirror, the more important it is that we do so.  Lucky Guy is like a reality show without winners.  There are only villains and victims who unwittingly play the game for the benefit of the writers and readers of tabloids.  Lucky Guy is a stark reminder that theater sometimes serves us best when it shows us our worst flaws.

There is ample free parking at and near the theater.  Lucky Guy, like all shows at The Edge, is general admission.  However, since it’s a small venue, there’s no need to arrive early.  There’s not a bad seat in the house.  You won't be further than 10 feet from the stage no matter where you sit.

One of the trademarks of an accomplished actor is the ability to stay in character when something goes wrong on stage.  Andrew Uhlenhopp put on a clinic for actors at this performance.  He had to run offstage to get to his next story, but in the process, tripped, tumbled, and crashed into a heap on the floor.  He bounced back up and, totally in character, quipped “I’m in such a hurry to get to my next story I nearly killed myself.”  Not only was that an excellent improvisation, but it reassured the audience that he wasn’t seriously hurt in the fall.

A detailed account of the Abner Louima case can be found here.

This show has adult content and adult language, but should be suitable for most teens. 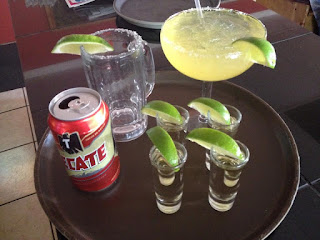 We went to Max’s Mexican Restaurant at 6999 W. Colfax in Lakewood.  It’s literally just a few steps from the theater.  For those who have dined at a Mexican restaurant on West Colfax that features cliff divers, you need to check out Max’s.  Authentic Mexican food in a simple, rustic setting.

The food is very good, the prices are low, and the staff is very friendly.  Yelpers give it 4 stars.

If you want cliff divers, you know where to go.  If you want good Mexican food near The Edge, go to Max’s.

Parking is on the west side of the building.