Spirits to Enforce: “Superheroes, A Submarine, and Shakespeare… and the Triumph of Art Over Evil.” 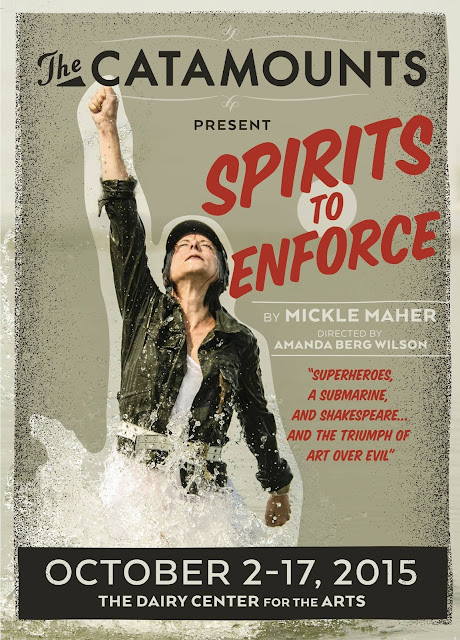 Inspired by and incorporating parts of:  The Tempest by William Shakespeare

“Now I want
Spirits to enforce, art to enchant,
And my ending is despair,
Unless I be relieved by prayer,
Which pierces so that it assaults
Mercy itself and frees all faults.
As you from crimes would pardoned be,
Let your indulgence set me free.”

For those wondering what the title Spirits to Enforce is all about, there you have it.  The Tempest, Act 5, Epilogue.  What you can expect at The Catamounts’ production of Mickle Maher’s script is some spirits and some art, to enforce and enchant.  What you need not expect is despair.  The focus will be comedy and a LOT of inside jokes about the theater “industry.”

Maher’s script is nearly indescribable, but here’s my inadequate attempt to do just that.  The cast of twelve is working the phones at a telemarketing “boiler room” located not actually in a boiler room, but in a submerged submarine.  They are marketing a production of The Tempest to a totally detached and disinterested public.

Each cast member is playing three simultaneous roles.  The first is a regular guy or gal, the second is a superhero, and the third is a character in The Tempest.  It’s not as confusing as it sounds; think of them as regular guys and gals first.  Just as Clark Kent is also Superman, Bruce Wayne is also Batman and Peter Parker is also Spiderman, these are real people first, and superheroes second.

You may wonder how superheroes end up in such a dreadful occupation as telemarketing.  It’s a good question. (Actors, directors, and other theater types can insert your own dreadful day jobs here.  Your superpowers probably don’t pay the bills either.)

The answer is that they are better described as “semi-super” heroes, and thus relegated to begging for money.  Spirits to Enforce superpowers include “The Silhouette” (played by Elgin Kelly), who is the master of shadow puppets, the “Fragrance Fellow” (played by Stephan Geering), who can detect a wide variety of scents, and “The Untangler" (played by Verl Hite), who can untie difficult knots.  From this I think it proper to assume that 1) superpowers may be more common than we expected, and 2) perhaps we all have some “superpower.”

To say the show opens with chaotic cacophony may be an understatement.  The 12 characters/superheroes/actors babble interminably on their phones, challenging the audience at the outset to make sense of the chatter.  Director Amanda Berg Wilson slowly begins to alternate the chaos with decipherable dialog, lighting one or two of the characters at a time and silencing the 10-11 others.  We learn that rehearsals start on Sunday.  Or Saturday.  Or they have already started and are going very well.  It seems that telemarketers everywhere take liberties with the facts.

In the process of begging for donations to The Tempest production, we are treated to an array of theater humor:

“The main part of the word “rehearse” is hearse…a vehicle to convey the dead.”

“If intoxication has any place, it is in rehearsal.”

For those involved in any manner with theater production, Spirits to Enforce is a must see show.    It’s a profoundly funny parody of the process.  If some of the inside jokes fall flat for the rest of us, that doesn’t diminish the folly of the argument that rehearsals spend way too much time on the script.  All of us can get that joke.

There is one particularly profound and striking point in the show where the entire cast goes silent.  The lights focus on the twelve exhausted and disappointed characters in a scene reminiscent of DaVinci’s Last Supper.  I may be reading too much into the staging, but the scene struck me as a brilliant and beautiful parody of the painting.  Perhaps the staging here is to subtly suggest the potential disaster for The Tempest?

The cast is exemplary; they define themselves magnificently as distinct characters in what is a decidedly difficult environment.  Merideth C. Grundei (Evelyn Lawson/Ariel) keeps the somewhat unruly group under some control, even if she has to stand on the table to do it.  Joe Von Bokern (Randall James/The Tune/Ferdinand) lacks self-confidence, but tries to hook up with Susan Tanner/Memory Lass/Miranda (Laura Lounge), who doesn’t even know who he really is.  Dale Clark/The Intoxicator/Stephano (Trina Magness) gets some of the biggest laughs in the show as she deals with her intoxicants and the consequences.  Each and every cast member here turns in a remarkably fine performance in a setting that makes it seem impossible to stand out.

The larger themes here (Do we all have our own superpowers? Does art really triumph over evil?) are less clearly drawn than the theater parody.  Without revealing too much plot information, I will say that it is a difficult question whether one might prefer performing to an empty auditorium to one filled with one’s mortal enemies.  Spirits to Enforce asks that question, and then answers it.  For those who have faced both empty seats and hostile audiences (hopefully not at the same performance), I’m sure you will have your own answers.

That The Catamounts are unafraid of risk is obvious; Spirits to Enforce is ample proof.  This show experiments with both style and substance.  It challenges the audience from start to finish.  For those who want the convenience and comfort of traditional theater fare, this show may not be for you.  For those of us who value innovation, experimentation, and challenge, Spirits to Enforce is a veritable feast for the eyes, the ears, and especially for the mind.

The Catamounts have a motto:  "Theater for the Adventurous Palate."  Spirits to Enforce is a delicious entree for that adventurous palate.

Free parking is available behind The Dairy Center and on surrounding streets.  There is construction going on at The Dairy, as they renovate the property.  The temporary main entrance is on the west (back) side of the building.  After entering, go down the long hall…the box office will be on your left.

Boulder Ensemble’s Outside Mullingar is playing in the Carsen Theater, immediately adjacent to the East Theater.  Please be courteous and limit any unnecessary noise that could disrupt the neighboring production.

If you are concerned that you have never (or maybe not for a long time) seen The Tempest, fear not.  A detailed understanding of Shakespeare is not needed to enjoy Spirits to Enforce.