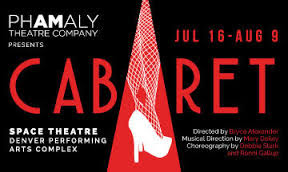 Based on the play by:  John Van Druten

I’m going to give you the bottom line at the top this time.  PHAMALY’s Cabaret is remarkable.  It will take you, shake you, maybe even break you.  You will laugh and cry.  You will remember this performance for a long time.

Now, having already given you my take on Cabaret, I want to thank for reading on.  There’s more. 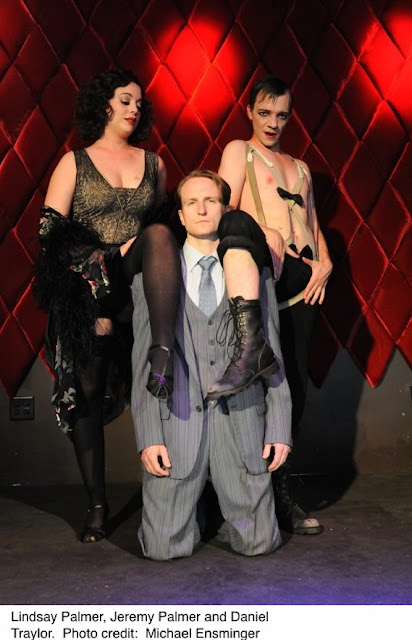 This Cabaret has two (2), count them, TWO Emcees.  Daniel Traylor plays 1/2 of the Masters of Ceremonies (Emcee) with his shadow Emcee, Garrett Zuercher.  The pair, dressed as you would expect in androgenous but revealing costumes, anchor Cabaret, giving it the required circus atmosphere.  Traylor handles all the lines, delivering them in his best French and German accents when necessary.  Zuercher says nothing, speaking only in ASL signs and gestures.

Traylor is magnificent.  He seems to float above and around the stage, as if on a cloud.  Shirtless, with suspenders holding up his black pants, he captures the audience quickly:  “Mesdames et Messieurs…Willkommen, Bienvenue, Welcome.”

He’s naughty.  He’s flirty.  He likes boys, he likes girls, and he has no apparent boundaries.  He is the poster boy for sexual freedom.  He’s like a little boy gone bad, but we can’t help loving him.  From the opening scene, Traylor, with his shadow emcee Zuercher, capture and enchant the audience.

Zuercher, who has a stunning professional résumé, alternately leads Traylor and follows him, slinking, signing, and occasionally flirting with Traylor.  The pair are mirror images with slightly different costumes.  That one speaks and the other is mute has a subliminal impact; we hear what Traylor says, but we wonder what is concealed in Zuecher’s silence.

Director Bryce Alexander’s Emcees are brilliant; having seen his vision will make it difficult to see Cabaret again with just a single Emcee.  Both Emcees tell a story, one with words, the other with his hands.  That story would now seem incomplete without both versions.

Alexander’s touch is also visible with Sally Bowles (Lyndsay Palmer), who seems somehow more domesticated and less bawdy than expected.  She connects with Cliff Bradshaw (Jeremy Palmer), an American customer at the Kit Kat Club whose sexuality is apparently straight, but possibly closeted gay or bisexual.  Alexander’s Sally Bowles is a sympathetic character, a little girl in an adult world, struggling to survive.  Yes, she’s been around the block.  Yes, she’s aimless and helpless.  Still, Alexander gives us a Sally to root for.

Alexander also springs a surprise on us:  children.  There is a disturbing scene in which a child in a wheelchair is badly mistreated.  Later, two children are seen in prison uniforms in the final dramatic scene.  I don’t recall any children in other Cabaret productions; this was a first for me.  I don’t do spoilers, so there will be no disclosure here of exactly what the children do.  I will say however, that the effect is unforgettable.

Lucy Roucis (Fraulein Schneider) and Mark Dissette (Herr Schultz) play the grown ups in the story.  They are the traditional romantic couple of Broadway musicals, except for the fact that there is no happy ending here.  Roucis and Dissette are exquisitely matched; their chemistry is palpable.  They provide the two most tender moments in the show, starting with their courtship in the song It Couldn’t Please Me More,” AKA the “Pineapple Song.”  If ever any couple got more mileage onstage from a piece of fruit, I haven’t seen it.  I won’t be able to look at a pineapple in the same way ever again.

Roucis and Dissette are marvelous in Married, Herr Schultz’ musical proposal.  It is in every sense a monumental tear jerker.  I would have looked around to see the audience reaction, but I couldn’t.  I was wiping the tears from my eyes.  In a show full of decadence and political horror, Roucis and Dissette gave me hope for humanity with moments that moved me to tears.

Jeremy Palmer (Cliff Bradshaw) brings nuance to his role as an American writer thrust into a social and political maelstrom.  He is naïve but sincere, and somewhat shocked to learn that he has been unknowingly involved in supporting the Nazi party.  He immediately goes from naïve to activist, refusing to participate further.  In the end, Palmer is convincingly both distraught and powerless as he sees Berlin becoming the Third Reich.  It’s not just that the Nazis are seizing power; it’s also that many Germans are ceding power, and Cliff Bradshaw seems to be the only one who cares.

Trenton Schindele is not just Ernst Ludwig; he is the epitome of the manipulative, scheming politicians who design and deliver revolutions.  Schindele shows us his two contradictory faces.  He is a friendly, outgoing socializer who secretly smuggles materiel for the Nazis.  He is the Nazi we do not know because he is not a beast; he has an air of respectability.  That he is a Nazi enabler is disturbing because he is not the stereotype we are familiar with.  Schindele seems to effortlessly portray the respectability and the despicability as if both should always reside in the same character.

Ashley Kelashian (Fraulein Kost) is playful and powerful as the naughty girl with a taste for sailors.  She brings us some humor at the times we most need it.  Kelashian is a breath of fresh air; she embodies the will to survive in some desperate circumstances.

Cabaret is a reminder that, like a frog slowly boiled to death, we often ignore incremental changes.  We don’t believe that the worst possible scenario might also be the most likely scenario.  When faced with harsh realities and hard choices, we all ask ourselves the musical question What Would You Do?  Just like Fraulein Schneider, we would probably do whatever we could to survive.  And if necessary, we would throw others, including perhaps those we love, under the bus.

Each and every actor on the Cabaret stage is splendid, whether in a leading role, in the ensemble, or in a cameo.  I’ll repeat that.  Every single actor on the stage is splendid.  You may have seen Cabaret before, but until you’ve seen this production, you haven’t seen it all.  This one is special.  I already gave you the bottom line up front, but I’ll say it one more time.  PHAMALY’s Cabaret is remarkable.

There is ample paid parking in the Denver Center parking garage for $12.00.  While that seems expensive, other lots in the area are comparable in cost.  There is metered parking (free on Sundays and holidays) on the surrounding streets, but availability is limited.  The parking garage is recommended for both price and convenience.

Theatrical fog is used extensively in Cabaret.  This show features adult content and adult language.  It is not recommended for children under 16.

I did not mention in the body of this review that PHAMALY actors have physical and/or other disabilities.  That was deliberate.  I do not consider them a disabled company; they are a fully abled company that can compete with any other company in Colorado.  And beyond, for that matter.

We went to Racine’s, 650 Sherman Street, after the show.  It’s a traditional stop, pre and post show, for much of the central Denver theater community.  Look around at your fellow diners; you may recognize someone from a show you’ve seen.

Made to order martinis, great appetizers, and reliable, affordable entrees are standard at Racine’s.  I had the Grilled Monte Cristo $11.99), which was large and delicious.  I took part of it home with me as I couldn’t finish it.  They have an extensive Margarita menu here.