I Love You, You're Perfect, Now Change. 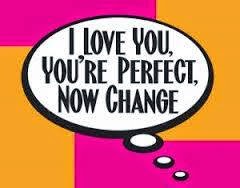 I Love You, You’re Perfect, Now Change (hereafter LPC) is notable for several reasons, not the least of which is that it holds the record for the longest continuously running musical in Colorado history.  It played the Garner Galleria Theater at the Denver Center for the Performing Arts for more than four years, racking up a whopping 1,731 performances with nearly 300,000 in the audience.  If you live on the front range and enjoy live theater, chances are pretty high that you were in the audience at the Galleria for LPC between 2000 and 2004.  I know I was there.

The script is essentially a series of skits highlighting the aggravation and rewards of dating and marriage.  Relationships are a fertile field for comedy, and the LPC script harvests that field with gusto.  That said, though, LPC also has moments of profound insight into our hearts.  The song I Can Live With That shows us how love can happen near the sunset of our lives:

Girl:
I like things clean, I scrub the wash,

Guy:
I got a garden, I grow some squash

Girl:
I keep in shape, I mow the lawn,

Guy:
I sleep in late

Guy:
No matter, I can live with that.

The message “I can live with that” demonstrates how we change from seeking an ideal mate to finding one we can live with.  That’s not “settling” for a mate.  Rather, it’s a recognition of what really matters in a relationship.  Understanding what really matters is something that only comes through experience, maturity, and a measure of wisdom, and LPC makes that point with a delicate, touching poignancy.

The script is funny and sometimes profound, but it is the actors who make or break those messages.  The cast here is up to the task.  Vanessa De La Rosa (Woman #2) and Josh Holcomb (Man #2) are the mature couple for I Can Live With That, and they nail it.  Their costumes and make up age them to (I’m guessing here) their late 70s.  They amble onto the stage with difficulty, each step a project.  They play and sing their parts with sincerity and conviction.  It’s a beautiful scene, directed with respect and dignity by Jill Manser.  Coming near the end of the show, it puts a serious exclamation point on the comedy that precedes it.  Manser, De La Rosa, and Holcomb remind us, as we leave the theater, that love is not just for the young among us.

Emily Macomber (Woman #1) rocks the house with Single Man Drought in act one, making the audience feel (and perhaps remember) the awkwardness of a first date that goes badly.  Macomber also had a rare unscripted moment in the February 14 performance.  She had to stay in character and briefly ad lib when a prop suffered a catastrophic failure.  That prop was a small wooden box, attached to the ceiling, that contained confetti to be dropped near her.  Not only did the confetti drop, but so did the box, narrowly missing her head when it crashed into the floor.  Macomber didn’t miss a beat; she picked up a ringing telephone and said “Hello, 911.  It was nice of you to call”.

Josh Holcomb (Man #2), shines in the Baby Song, realizing that he’s regressing from an adult into a babbling baby talker:

Holcomb delivers Baby Song with a mix of disbelief and acceptance, working the audience for all the humor he can muster.  Trust me…that’s a LOT of humor.

Stephen Sbanotto (Man #1) delivers a heartfelt Shouldn't I Be Less in Love With You, letting us know that not all long term relationships are doomed:

For those who may be wondering, LPC is a show that, after more than a decade, is still very fresh.  Very little about LPC is “dated” (pun intended).  It still hits home.  We have all dated, we have all (or most of us) had long term relationships, and most of us have lost someone we really cared about along the way.  We can still relate to nearly everything in LPC.  It rings true today, just as it did when it opened in Denver in 2000.

Stage Door’s production has a capable cast, sensitive direction, and a universal relevance.  Add to that perfect timing for Valentine’s Day, and Stage Door’s show is a great date night for couples of all ages.

This show is suitable for teens and up.  The script contains some adult language and adult situations.

There is ample free parking in the lot at the theater.

As luck would have it, our seats turned out to be next to a couple visiting from Florida.  Chatting before the show, we learned that they had come to Colorado to see their daughter, Vanessa De La Rosa, perform in I Love You, You’re Perfect, Now Change.

They are justifiably proud of Vanessa, who turned in a quality performance for her parents and for the rest of us.  That they traveled so far to see her perform reinforces the message of I Love You, You’re Perfect, Now Change.  They will go thousands of miles to support Vanessa’s theater dream.  After talking with them, I couldn’t help but think of the first 2/3 of the title:  I Love You, You’re Perfect.  No changes necessary.

We had an early dinner in Denver, so I can’t really recommend a restaurant in Conifer.  However, I’m a big supporter of frequenting a theater’s sponsor.  Brooks Place Tavern is one such sponsor of the Stage Door Theatre Company.  I’ll definitely check it out the next time I’m in Conifer, Evergreen, or Pine.  Menu here.

TICKETS HERE:  THIS PRODUCTION HAS CLOSED.