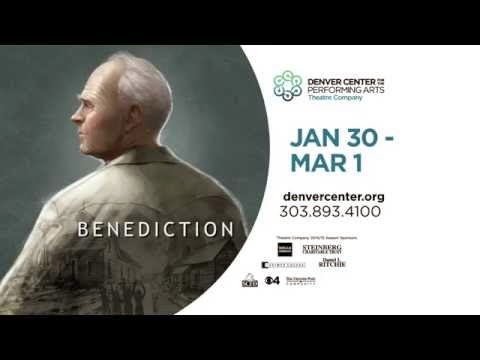 Playwright:  Eric Schmiedl, based on the novel by Kent Haruf

A benediction is, literally, a blessing.  The Denver Center Theatre Company’s (DCTC) production of Eric Schmidel’s script (adapted from Kent Haruf’s 2013 novel Benediction) is a blessing as well.  It’s a sensitive but intense retelling of Haruf’s story of life and death in Holt, Colorado.

Haruf penned a triology about Holt, a fictional small town on the plains east of Denver based on Haruf’s experiences living in Yuma Colorado in the 1980s.  For fans of Haruf’s novels, and for the many fans of the DCTC adaptations (Plainsong in 2008, followed by Eventide in 2010), Benediction is a fitting if challenging finale.  For those who may be thinking that Benediction might not work if you’ve missed the first two parts of the trilogy, let me put your worries to rest.  Benediction can stand alone as a play without seeing either of the earlier shows.

Holt is the small town location where the story takes place.  It's a story where 77 year old Dad Lewis, longtime owner of the local hardware store, goes from terminal diagnosis of cancer to his death in bed at home.  Haruf’s telling of the story is not one of impersonal, clinical hospital death.  Rather, it is highly personal, with family present, and a cloud of grief hanging just above the heads of actors and audience alike.

Haruf’s tale is taut, folksy, and relentlessly realistic.  We see real people, with real problems, and with real dilemmas.  Dad and his wife Mary have “lost” a son.  Their daughter, Lorraine, has lost her daughter in a car crash.  The pastor and his wife have had marital problems; he has been “reassigned” for creating controversy in his Denver flock.  Alene, a retired teacher, regrets her only passable long term relationship was with a married man.  These characters bear a cross of heavy baggage, and yet they are palpably real.

Mike Hartman plays Dad Lewis with a cranky but pragmatic approach to his demise.  The show opens with him telling us of his approaching death:

He’s resigned to his diagnosis, but not overcome by it.  He has unfinished business, and Hartman squeezes the most he can out of the time available to his character.  Hartman lovingly transfers his hardware store to his daughter.  He forgives a debt for a mentally ill customer, and has his staff look after her.  Hartman is at his best, though, when he confronts his past, especially about his son Frank.  Hartman breaks our hearts, telling the story of finding his teenage son crossing dressing with another boy.  He breaks our hearts again, when he confronts that son, now in his 50s, in a vision on his deathbed.  When his daughter asks him why he never wanted to touch and caress her face as a child, his answer is stunning:

I was too busy. I wasn’t paying attention.

Hartman’s performance is a gem of the first order, giving voice to our own fears of accounting for our past sins.

Joyce Cohen’s Mary is a strong match for Dad’s crankiness.  Cohen’s a wispy little woman with a big heart; she makes Mary a loving and incredibly strong person.  Cohen takes no back seat to Dad, but she never comes off as pushy or witchy.  She’s a lady.  She’s a wife. And she dignifies the role as she is defining it.

Haruf’s female characters are all strong, determined women; Cohen is a perfect choice for that club.  The other women of the cast bring that same feminine strength to the spotlight as well.  Nancy Lemenager (Beverly Lyle) has baggage; she cheated on her spouse, and he’s a pastor.  Lemenager puts him in his place for creating a living hell for their son and for pretending to forgive her past.  Lyle shows all of us the strength it takes to stand up to a spouse and say “enough.”

Katleen McCall as Lorraine, daughter of Dad and Mary Lewis, is also a woman to make us proud.  She has an on and off affair with a guy who her parents rightly think a loser, and she grieves for her dead daughter.  McCall pulls off the despair and the grief with dignity.  Her burden is heavy, but she soldiers on, taking over the family business when she could just as easily say “no thanks.”

Frankly, every performance here is memorable.  There’s a quiet simplicity and a profound sincerity displayed by everyone on the stage.  I get the sense that while this is a “performance,” it’s one that the cast has a deep personal connection with. They all seem engaged personally as well as professionally.

Haruf is intent on making the point that it is often the women who are the strongest among us.  They have the capacity to suffer, the determination to press on, and the dignity to do it without whining about it.  The point is well taken.  Women in general are often overburdened and undervalued. Watching the women of Benediction carry off the wake after Dad’s death is telling.  They simultaneously grieve and push on, as they must.

Lisa Orzolek’s set design works in concert with Dan Darnutzer’s lighting design.  They have projected sky and clouds in 360 degrees around the theater, delicately lit to suggest the season and the time of day.  I presume that Orzolek is responsible for the scenic design that has four women cooling off on a hot day.  It’s a remarkable scene, one for which she deserves abundant credit.  Likewise, the set and lighting designs in the garage scene with young John Wesley is both brilliant and terrifying.

Director Kent Thompson (who also directed Plainsong and Eventide) has paced the three plus hour show well.  The time goes by quickly, never dragging.  Thompson has put exactly the right touch on the script to emphasize Haruf’s themes of morality, faith, life, and death.

Benediction has the added drama that novelist Kent Haruf died on November 30 2014 of lung disease, two months before Benediction opened its World Premiere.   There is absolutely no doubt in my mind.  He would have been very proud of this show.

There’s a line from the play that sticks with me (I think it was Mary/Joyce Cohen who said it), as it seems to summarize what Haruf has to say in Benediction:

The things we don’t have time to do may become our burdens in our final hours.  It will be too late to fully redeem ourselves.  We will all have unfinished business in the end.  We can reconcile ourselves to that harsh reality now, or we can reconcile ourselves to it on our deathbeds.  But we can’t avoid it.  No one gets to “finish” life without the pain, the unhappiness, and the broken dreams we started with.  There IS some good too; without that good the rest would be unbearable.  But we don’t get the good without the bad, and that is an universal truth that Haruf has made abundantly clear.

For all its strengths, Benediction gave me some pause as well.  Staging it in the round is difficult, and at times frustrating for the audience.  The deathbed scene is critical; I could only see the back of Dad Lewis’ head.  I feel I missed Mike Hartman’s best moments on stage.

I haven’t read the novel, but the title “Benediction” would imply that the blessing is an important part of the work.  The “benediction” in the play is a rather minor event as the family gathers around Dad’s deathbed.  The actual “benediction” here is more implied than expressed.  Perhaps that’s how Haruf meant it to be, but if so, the title would seem misplaced.

Although the pace never dragged, at longer than three hours, Benediction challenges audiences.  Even with two intermissions, there is a danger that some portion of the audience will tune out as attention spans reach their limits.  Some trimming of the script could be helpful.  The script contains at least three major story lines:  1) Dad Lewis dying of cancer, 2) Alice, a young girl whose mother has died, and 3) a minister’s family struggling with relocating to Holt.  Of the three story lines, it is the first, the end of life story, that you will remember when you leave the theater.  A focus on just one of the secondary story lines would streamline the show greatly without diminishing Haruf’s central message.

Benediction is a marvelous achievement for the Denver Center Theatre Company, one for which it can be justifiably proud.

This show is not suitable for all ages.  The script contains adult situations, and a disturbing scene involving a teenager.  It is suitable for ages 16 and up.

There is ample parking at the theater parking ramp ($10-12) and metered parking neighboring streets. I know…it sounds expensive.  However, if you can’t find a meter, the other parking facilities in the immediate area are comparable in price but not as convenient.

As this production neared its opening, Kent Haruf died on November 30, 2014.  He did an extended interview with John Moore, DCPA Senior Arts Journalist.  It’s a remarkable interview, and if you haven’t read it, you can find it HERE.

There are numerous restaurants in easy walking distance of the DCPA.  We tried the Dorchester Social Eatery at 1448 Market Street.  It was during Denver Restaurant Week, so there were $30  specials at the Dorchester.  We arrived for a 5:00 reservation, and were immediately seated.  I notified our waitress that we had a 6:30 curtain and needed to be finished and checked out by 6:00 PM.  She fully accommodated our schedule, even having the kitchen get dessert ready before we finished our entrees.

I had the Wagyu burger ($14) and Roxie had the Restaurant Week special ($30).  The special was an appetizer (in Roxie’s case, the French Onion Soup), an entree (Shrimp Pasta) and dessert (Creme Brulee).  All were well prepared, tasty, and served with panache.  Happy Hour is 3:00-6:00 PM.