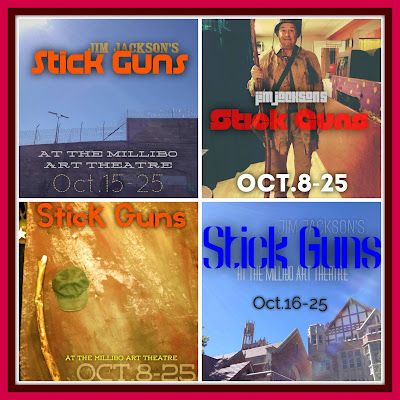 Heads up.  This post will include very little detail about the arc of the story.  Details would ruin the experience, and I could not handle that level of guilt.


Any theater piece with a one person cast is risky.  Jim Jackson wrote Stick Guns, and he is the only actor on the stage for the entire performance.  The script is “semi-autobiographical,” so Jackson is very familiar with the central character.  He steps out on the stage in the first scene, stick gun in hand, and walks that one man show tightrope for nearly 90 minutes.  He doesn’t waiver, he doesn’t stumble, and he certainly never falls off that tightrope.  He carries Stick Guns with the skill of a talented actor and the confidence of a man with something important to say.

I sat in my seat for a full 30 seconds after Jackson finished 85 minutes later, feeling like I had been punched in the gut.  Then I did what everyone else did.  I stood up.  I clapped.  I brushed away a tear.  I thought about the power of theater, and the impact Stick Guns had on every person in the room that night.

Jackson grew up in southern Colorado; Cañon City to be precise.  Cañon City is arguably different from most other places.  The local industry is prisons.  The prisons in Cañon City are also the biggest employer, staffing the facilities with locals as guards, maintenance people, and administrative staff.  The local citizens also provide the prisons with food services and many other assorted necessities.  Despite the symbiotic relationship, it's an unusual situation.  There is literally a wall between the citizens of Cañon City and its temporary residents.  If your early childhood included emergency drills for prison breaks, you might be from Cañon City.

It is in this unique environment that Jackson tells the story of his childhood, where a good “stick gun” was de rigeur, at least until you were old enough for a BB gun.  Guns are “magic;” pull the trigger and “everything changes.”  To a kid whose heroes (John Wayne in particular) all had guns, guns were the ultimate symbol of power and prestige.


Frankly, Jackson’s childhood in the 1960’s is not markedly different from my own in the 1950’s, although there was no prison in my neighborhood.  We played cops and robbers with stick guns.  Like Jackson, I briefly had a paper route, delivering the Milwaukee Journal.  We got into our share of trouble, mostly for lobbing snowballs at passing city busses.  Jackson, though, unlike me, is a master story teller.  His stories are engaging, comical, charming, mischievous and unquestionably true.

The childhood memories in Stick Guns seem to run a little long, but there’s a reason for that.  Jackson slyly threads his secondary characters into the amusing events of his childhood, setting up a crisis that erupts in the last scene.  It is this careful, detailed set up that makes the crisis so powerful and the loss so unbearable.  It is a credit to Jackson’s writing and story telling that the conclusion is one that I never saw coming.

Jackson is directed here by his wife Birgitta De Pree, although I suspect both would admit that he needs little direction.  Stick Guns is Jackson’s life story and he has no problems “telling it like it is” on the Millibo stage.  Bob Hill’s set design is a two level swooping path adorned with about 100 real sticks.  Hill puts a stationary bike at Jackson’s disposal for delivering papers and other adventures.  Benjamin Pratt’s lighting design keeps the spotlight on Jackson for dramatic scenes, and daylight on the set for the proper ambiance.

Jackson, no doubt fatigued after pouring out his soul for 85 minutes on the Millibo stage, lingered in the lobby after his standing ovation.  He personally thanked the audience members individually as they left.  I overheard several compliments he got from the patrons, including this one:  “In twenty years of theater, this is the BEST I have ever seen.”  High praise indeed, and it was both heartfelt and justified.  I can only add my endorsement to that comment.

As we were driving home after the show (one of the measures of a good show is whether it stays with you afterwards; Stick Guns does), I was thinking about my own childhood friends, and where they are now.  I have lost touch with all of them over the years, as our paths diverged and our lives changed.  Stick Guns reminded me of some long forgotten memories.  I will be reaching out to reconnect with some of those friends. 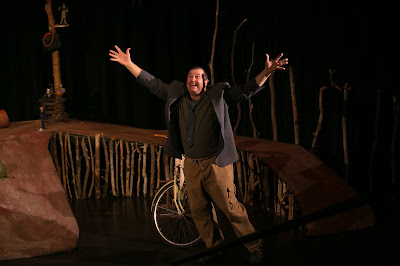 As Jackson put it:

"Sometimes when you are looking back after a long time you have to fill in the blanks to make sense of it all."

I’m going to get some help from some old friends to fill in those blanks in my own childhood. Just to make sense of it all.

Despite the playful nature of most of the script, I do not recommend Stick Guns for young children.  The climax may be too disturbing for them.

Parking is free but scarce at Millibo Art Theatre.  When we arrived at 6:15 for dinner at the Bristol Brewing Company, the parking lot at the Millibo was already full.  There is additional parking in front of the former Ivywild School, and on surrounding streets.  You may have to walk a block or two, and the street lighting is not very bright.  Gentlemen may want to consider walking to the car after the show and driving back to the theater to pick up the date or spouse.

Stick Guns gives some prominent mentions to Skyline Road in Cañon City.  If you haven't driven Skyline Road before, do it soon.  It's a marvelous drive for Coloradans and visitors alike.

The Bristol Brewing Company, 1604 S. Cascade Avenue, is co-located on virtually the same property as the Millibo Art Theatre, and an obvious choice for theatergoers.  The short 3 minute walk between the two venues means you don’t even have to move your car from the parking spot you were lucky enough to snag.

We arrived at Bristol Brewing around 6:15 PM, which should be sufficiently early for a 7:30 curtain 3 minutes away.  We were seated almost immediately, but it was another 10 minutes or so before a waitress showed up to take our drink orders.  We ordered an appetizer and 2 beers.  They were delivered a few minutes later, and the waitress took our food order.

After another 5-10 minutes had passed (it was now 6:35 or so), our waitress returned to notify us that a large group had arrived just before we did, and that our food would be delayed by about 40 minutes.  I explained to her that 40 minutes was not enough time for us to eat and be in our seats by 7:30.  She apologized but said there was nothing she could do.  I asked to speak to the manager, who apologized, but could do nothing about the delay in the kitchen.  He offered to comp our appetizer and beers.  I declined the offer, as I realized that there was nothing he could do about the long delay in the kitchen.

I get it; a restaurant can’t plan who will arrive or when they will arrive, but the downside is that a large group that swamps the kitchen penalizes everyone else in the restaurant.  We had to cancel our food order and skip dinner.

Bristol Brewing Company is a popular restaurant, but I can’t recommend it for theatergoers.  Even if you arrive early enough, you may not be able to eat and make it to the show on time.  My recommendation would be to try Bristol when you do NOT have another commitment that could be jeopardized by the bottleneck in the kitchen.