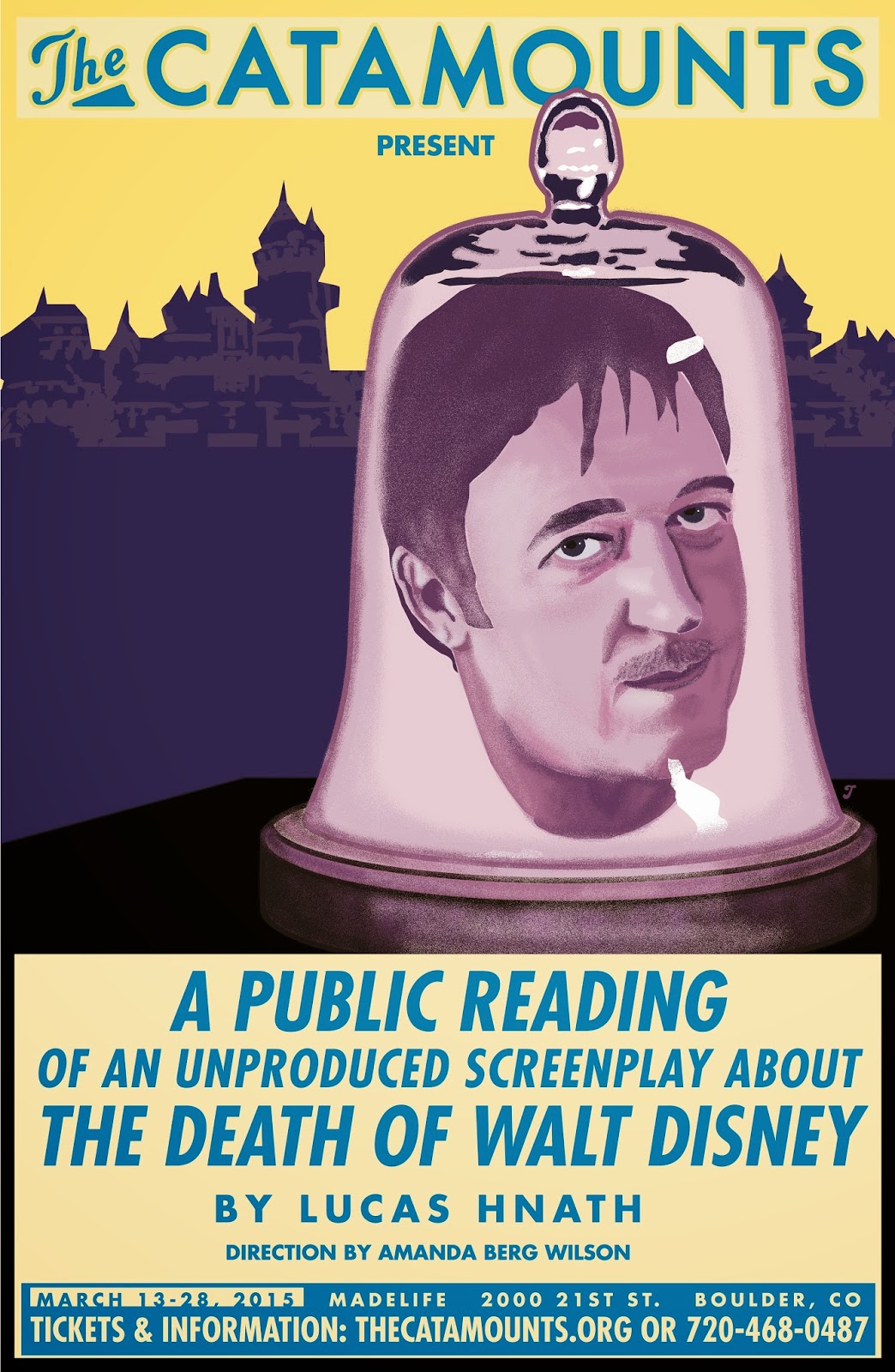 Not to burst anyone’s bubble, but Disney’s dark side is on full display at the Catamounts in A Public Reading of An Unproduced Screenplay About the Death of Walt Disney (hereafter abbreviated as APRUSADWD).

Not only is that one of the longest titles ever for a play (perhaps beaten only by The Persecution and Assassination of Jean-Paul Marat as Performed by the Inmates of the Asylum of Charenton Under the Direction of the Marquis de Sade), it’s also one of the most descriptive titles you will find anywhere.

What you get is exactly what it says:
The four actors enter, sit down at a table, pick up their scripts, and act out the screenplay.  They include stage/screenplay directions, including the ubiquitous “cut to” (transition/change of scene).  The screenplay covers a range of topics, from Disney’s health to his succession plan, and from problems with his daughter to his squabbles with employees seeking to unionize.  These issues all have factual roots in Disney’s life, although they are far less well known than the products he produced.

Paul Borrillo plays Walt, who comes off as a bully at best and an uncaring egotistical psychopath at worst.  Borrillo is in a constant state of agitation, ranging from frustration to rage, with occasional bouts of clinical depression.  He seethes at union organizers, bullies his brother Roy (Mark Collins), orders his daughter to name her son “Walt,” and, at one point, turns to Roy and asks him if he thinks he’s a “jerk?”  Well, Walt, if you have to ask, you probably already know the answer.  Borrillo, who has a passable likeness to the original Walt, delivers a tour de force performance, taking an American icon and turning him into a flawed, pathetic human being.

Mark Collins plays Walt’s brother Roy, who bore the brunt of much of Walt’s anger.  Collins is not a foil for Walt; rather, he’s a doormat.  Collins shakes his head and rolls his eyes, trying to get Walt to see reality.  Collins’ understated, submissive performance is a gem.  He comes off as the wiser, smarter, and more mature brother who is exceedingly tolerant of Walt’s tantrums.

Lindsey Pierce plays Walt’s daughter who is married to Ron Miller (Jason Maxwell).  Both have relatively minor roles in the screenplay.  Maxwell’s performance made for a suitably annoying Ron; Miller got under my skin as well as Walt’s.  Pierce had a juicy moment with Walt, in which she completely unloaded a lifetime of anger on him.  It was a cathartic performance, and Pierce delivered it with unbridled zeal.

Amanda Berg Wilson directs with a frantic pace and intense performances.  She gets that and much more from her talented cast.  Ryan Wentworth’s lighting design is relatively transparent until he lights up the stage as Walt’s health takes a turn for the worse.  That scene is done beautifully, emphasizing the drama of the moment.  Wentworth also goes all out for the final scene, darkening the stage but lighting Walt in an eerie, creepy transition before fading to black.

As I was watching APRUSADWD, I had the distinct impression that I have heard this story before.  The story of a brilliant innovator and successful entrepreneur who was nearly impossible to work with, bullied his talented employees, hid his health problems, and turned to alternative medical options for his cancer at the end.  Ironically, Steve Jobs and Disney collaborated on Pixar Studios long after Walt was gone.

Lucas Hnath’s script includes some artistic liberties; I cannot verify several important parts of his story (how Roy got the bandage on his head, the origin of the Liberty Tree at Disneyland, and the details about Walt’s death).  I can overlook those liberties, given that no one on a pedestal can withstand strict scrutiny.  I suspect that Walt had enough skeletons in his closet to create a compelling script, had Hnath wanted to stick to the historical record.  His choice, to make up derogatory facts about Disney leaves him open to needless charges of character assassination.

Whether the story here is entirely factual (it’s not), it does underscore something important in our culture.  We tend to deify our cultural heroes.  It’s universally true that they are flawed human beings who have feet of clay.  Walt Disney was such a man.  He was not a god.  He was not a hero.  He was a man.  A very successful man, but still a man.

As I left the theater, I couldn’t help but remember that Disneyland is a dream, not a reality.  “The Happiest Place on Earth” did not make its creator a happy person, and any happiness for the Disneyland visitors ends in the parking lot at the end of the day.

Life is complicated.  Even the dreamers have to face reality in the end.

This show contains adult language.  OK for teens and up.

There is parking on surrounding streets, but this is Pearl Street (at 21st) in Boulder.  It would be wise to arrive early enough to hunt for a good spot if you have not been to madelife.

Although the building is at the corner of 21st and Pearl, you can’t actually enter from either street.  You have to walk around to the east side of the building (which faces 21st), and enter through a back door.  It’s not well marked or signed, so be ready to poke around a bit in the dark.  Don’t worry; you’ll find it.  There’s probably a small crowd walking around looking for it, so you might want to join forces with others.

For those who are interested, here is a link to Walt Disney’s testimony to the House Un-American Activities Committee (HUAC) about Communists organizing a strike at Disney Studios.

T⎮aco, 1175 Walnut Street, Boulder, 80302.  We had planned to stop at the Walnut Brewery & Restaurant (practically next door to T⎮aco), but there was a 20 minute wait before seating.  Since we didn't have time to wait, we checked into T⎮aco, where we were seated immediately.  (They are probably accustomed to getting the overflow from the nearby brewpub.)

What a marvelous surprise.  The service was fast, excellent, and competent.  The food was tasty; small soft tacos, excellent queso with the chips & salsa.  We tried three of the salsa choices, including the habanero and the chipotle.  The habanero is eye watering, sweat inducing HOT, the chipotle was delicious.