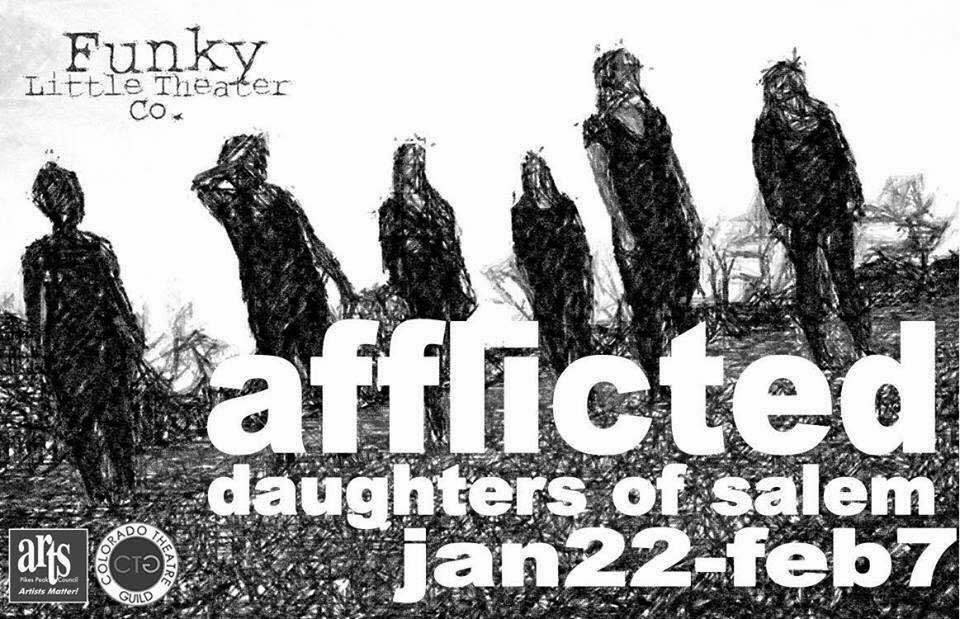 Date of Performance:  Thursday, February 5, 2015.  Afflicted at The Funky Little Theater is a regional premiere.

It was a different time, and a different place.  A small coastal town in colonial Massachusetts became infamous for trying, convicting, and executing women engaged for what was believed to be witchcraft.  Salem is now synonymous with religious fanaticism run amok.

The Funky Little Theater Company (hereafter FLTC) brings us Afflicted with no small irony.  Their Colorado Springs theater is smack dab in the center of an evangelical religious mecca.  From mega churches to strip mall storefront specialty churches, Colorado Springs is a demonstrably, proudly, and overtly religious community (here's a recent example).  Afflicted takes us back to the bad old days of American religious excesses, and, sadly, some of those excesses are still with us over 300 years later.

If you’re familiar with The Crucible, Arthur Miller’s classic American drama about the Salem witch trials, you’ll appreciate Afflicted.  More prequel than sequel to Miller’s masterpiece, Laurie Brooks has constructed an engaging script with an all female cast.  She has stripped the Miller version of the men of Salem village, instead showing us the crushing hopelessness of the village’s young women.

Afflicted is the first full production at FLTC’s new facility, and it’s a great start at the new address.  Director Chris Medina has put together a fine cast that recreates the stilted English dialect of the late 17th century and the soul crushing oppression of women of that era.  Although the pace seemed somewhat rushed at points, the cast creates a credible sisterhood that drives the story to its final fracturing. 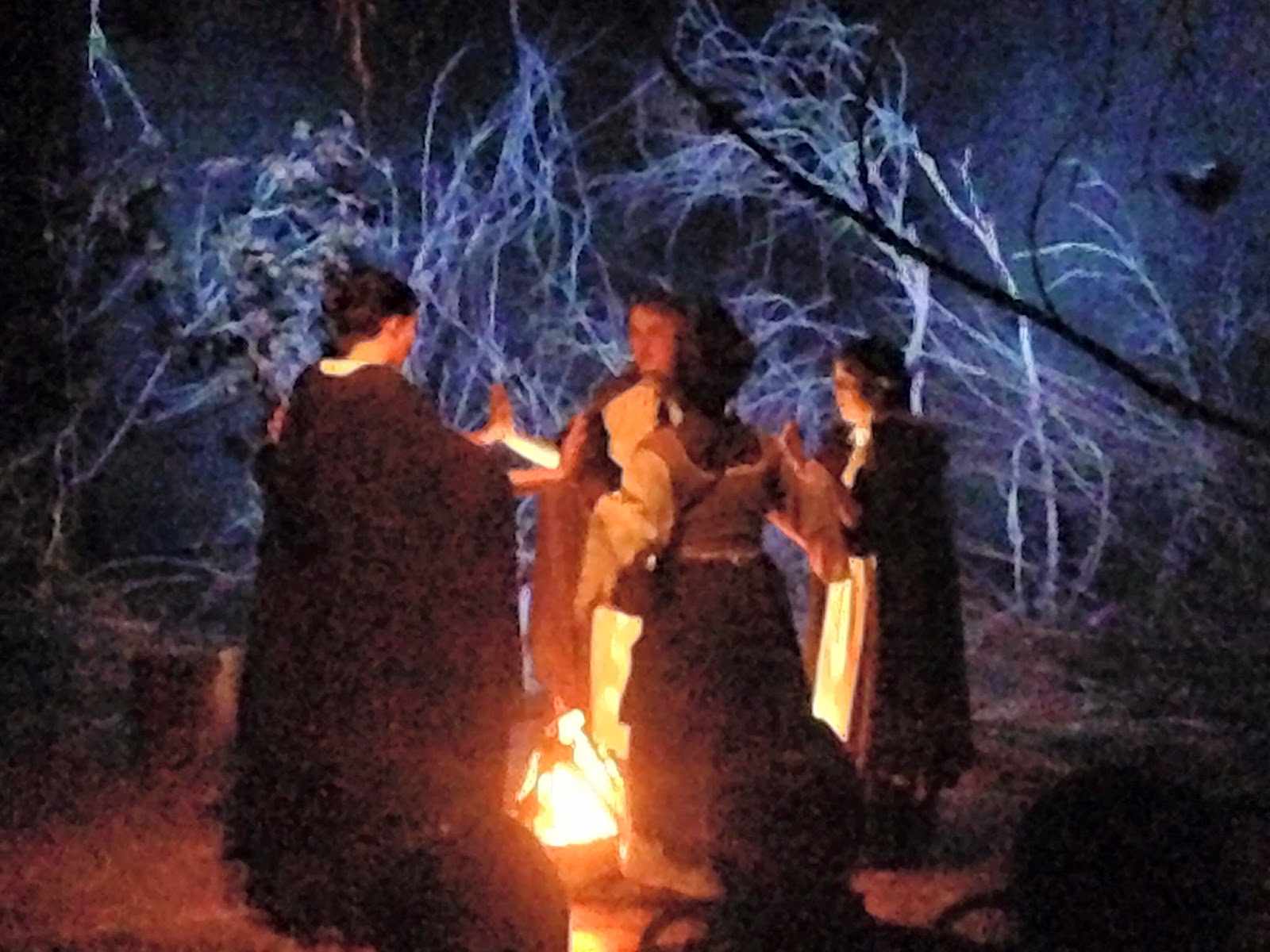 Several performances are notable, not the least of which is April Hamer as Betty.  Hamer sparkles as the young and conniving woman who keeps Abigail’s secret.  When she falls “afflicted,” Hamer is suitably suffering right before our eyes.  Michelle Pantle plays Abigail with the nuanced detail necessary to take her character from sisterhood to self preservation.

Still, it is Lizzy Essiedu as Tituba who lingers after the lights come up.  Essiedu, as the slave who is critical to the sisterhood of the woods, conjures the spirits at will.  She brings a girlish charm to her role as well as a mature understanding of the dangers she courts.

The set, a collaboration by Chris Medina and Jeremiah Miller, is a convincing woodsy setting.  Medina and Miller have brought the woods inside, filling the stage from floor to ceiling with branches and leaves.  A rolling platform, with appropriate furniture, brings the interior scenes into focus.  Miller also designed the lights and sound, both of which are notable for being effective but inconspicuous.

The religious fanaticism of 1692 dispatched victims after perfunctory trials; nineteen were hanged and one was pressed to death (peine forte et dure) because he refused to enter a plea in court.

“A preliminary examination took place on May 31, 1692, at Nathan Ingersoll's house in Salem Village. This was Redd's first meeting with the children she allegedly bewitched. They promptly fell into fits, and when asked what she thought ailed them, Redd said, "I cannot tell.”  Urged to give an opinion, she stated, "My opinion is they are in a sad condition.”

Indicted as a witch, Redd was accused of "detestable arts called Witchcraft and Sorceries wickedly, mallitiously [sic] and felloniously used, practiced & exercised at the Towne of Salem."

Wilmot Redd was executed by hanging on September 22, 1692, one of 19 put to death for witchcraft.  Seven others (or five, in some accounts) died in prison, including an infant child.

To say that this was not our finest hour is an understatement.  Arthur Miller, and now Laurie Brooks, call us to account for the religious zealotry of that time.  FLTC boldly stages a show that will undoubtedly be uncomfortable for many in the local evangelical community.  It shows religious excesses, and the hypocrisy that fueled them.  Unfortunately, some of the Salem harshness (albeit without the distraction of a phony trial) and hypocrisy is still with us today.

Sometimes I get on a soapbox, and this is one of those times.  Religion should be defined by the good works it accomplishes.  Too often religion diminishes itself through the evil it tolerates.

Brooks’ script probably won’t change anyone’s life, but it will make you examine your values.  That is reason enough to see Afflicted.  That FLTC would choose this script for its inaugural show in their new theater makes a bold statement.  They are holding up a mirror to the community.  I only hope that those who need to remember the religious past will look in that mirror and take the lessons to heart.

This show is suitable for all ages.  There is ample free parking in the strip mall.  For those who have not been to the new FLTC location, you may want to allow a little extra travel time.  The surrounding streets, including Templeton Gap, are not well lit, and the theater is tucked away in the middle of the strip mall.  Street signs and house numbers are difficult to see in the dark.  Look for the Humble Coffee hut in the parking lot…when you see it, you’ve arrived at FLTC.

There’s not many restaurants in the vicinity (OK…there’s a KFC and a McDonald’s on Fillmore), so consider a wider area for pre/post show dining.  We ate at Salsa Brava in  Rockrimmon before the show.  Since Afflicted had a 7:00 PM curtain, we had to rush it a bit. Our waitress (Dawn) was very accommodating and we were able to have chips and salsa, a beer each, and entrees within 45 minutes.  My chimichanga was delicious.  Roxie’s fish tacos came with cucumbers…she picked them out.  If you’re not a fan of cukes, keep that in mind when ordering.  Menu here. 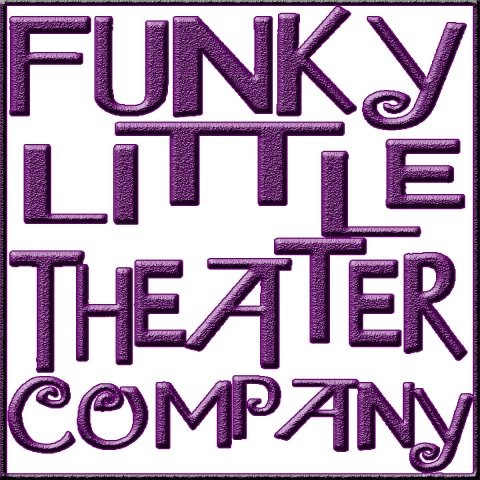