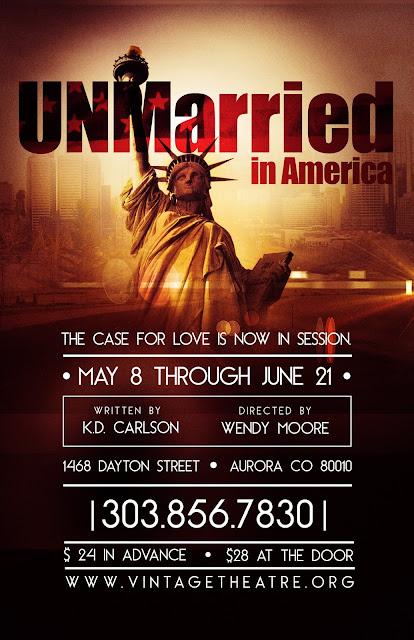 Turning years of litigation into a cohesive, entertaining script is a task few would take up, but playwright K.D. Carlson has delivered a remarkably engaging drama out of dry legal briefs.  This is an ensemble piece, with a central character (nearly a narrator at times) to tie things together.  Julie Wolf Butters plays the Court Reporter, who sits in the courtroom every day, transcribing the witness testimony for and against marriage equality.  She brings her work home with her, discussing the issues with her longtime Boyfriend (Tom Auclair).
Carlson turns what could have been a dull legal exercise into an engaging human drama by focusing less on the legal and more on the personal.  The result is sometimes funny, sometimes touching, but always an honest story of real people struggling one of the great social upheavals of our time.

Director Wendy Moore puts the entire ensemble onstage for most of the play.  Actors are in the background, seated, acting as a sort of Greek chorus, observing, reacting, but mostly just quietly watching as the actors in the foreground provide the dialog and action.  It’s an effective way for the audience to stay with the multiple characters even when they are not front and center.  It reminded me of the staging for the Evergreen Players production of The Laramie Project.

Wendy Moore's set design is simple but functional, dividing the stage into two equal parts with a barrier that suggests the audience is in a court room.  There is room upstage for actors to be seated facing the audience while the action takes place downstage.

I was a bit baffled the first time an actor got up in the middle of a scene and walked offstage.  Actors moving on and offstage is a necessary part of the blocking and costume changes.  However, it did distract occasionally from the drama playing out before the audience.  I’m not sure whether this was a result of stage directions or the director’s choice, but I would prefer a less distracting way to accomplish the shuffling of actors through the scenes.

Dan Kopper (Dad) plays a devout Christian pastor with a teenage gay son.  One never doubts Kopper; he plays dad with sincerity and conviction.  He struggles with his son’s (Zack Nick) sexuality, even suggesting Christian gay conversion therapy.  Kopper’s dilemma is put into full focus when, in exasperation, he pleads with his son not to “make me choose between my son and my faith.”  There’s not a person in the room who doubts Kopper’s sincerity or anguish.

Julie Wolf Butters (Court Reporter) and Tom Auclair (Boyfriend) are heterosexual, unmarried, and unhappy (in the Court Reporter’s view, at least).  Butters brings the marriage equality arguments home to her Boyfriend, who is decidedly hostile to marriage for same sex couples, and for that matter, for himself.  Butters deftly demonstrates the irony that her Boyfriend lacks a passion for marriage, while those who are denied marriage have a burning desire for it.

There's plenty of drama in Unmarried in America, but it is the confrontation between Gina (Missy Moore), and her husband Gary (Jeff Jesmer) that grabs the audience by the lapels and won't let go.  It turns out that Gary is gay, and he confesses as much to his wife Gina.  What follows is the most awkward, the most volatile, and the most revealing moments of the show.  Missy Moore literally looses it when Gary confesses.  The meltdown is difficult to watch; Moore’s heart is broken and she’s furious.  Her colleagues in the Greek chorus, who know what’s coming and have seen it many times, are still reduced to tears as Moore unloads her fury on Gary.

That bears repeating.  Moore makes her colleagues cry.  I haven’t seen the script, but I sincerely doubt that the stage directions call for tears from the chorus.  Those tears are a human and personal reaction to Moore’s powerful performance.  In my experience, it’s extremely rare to see actors moved to tears by a colleague night after night.  Moore can bring them to tears the first time and every time she performs.

This is an ensemble piece, and the ensemble is excellent.  Jeff Jesmer is a lovable, huggable Gary, even though he takes the brunt of Moore’s fury.  One can hardly wait for him to emerge on the other side, battered but unbroken.  Kelly Uhlenhopp (Karen) makes a great mother in a 2 mom relationship, and perfectly handles a single guy who chats her up.  Zack Nick (son) is the vulnerable gay teen who struggles both with his sexual identity and his conflicted parents.  Christian Munck (Chet) takes a beating and keeps on ticking.  Suzanna Wellens (Mom) can’t take her concerns to her pastor, and there’s a very good reason for that.  It's an understatement to say that there is no weak spot in this cast.

Before the show began, I was alert to the possibility that the script may be speaking to the choir about marriage equality, and perhaps doing so by diminishing the opponents.  I was wrong.  I can assure you that it does not pander to the winners in the Proposition 8 trial, and it does not insult the opponents.  They are portrayed exactly as they should be, with dignity, sincerity, and an honest version of the arguments both for and against same sex marriage.  That the opponent's arguments are insufficient is clear, but the characters are portrayed as “characters,” not as caricatures.  Carlson’s script gets a hat tip from me for the respect she shows to both sides.

Unmarried in America has beautiful moments, tender moments, and some moments that are frightening in their portrayal of violence done to a gay character.  There are also moments that reflect the angry cacaphony that has at times dominated the discussion.

When you get to know the characters in Unmarried in America, it’s very difficult to feel anything but compassion for them.  These are real people, with real problems, and therein lies the power of Unmarried in America.  We see both sides in the marriage equality debate as a individuals we can identify with, individuals with passionate convictions both for and against a major structural change to our society and culture.  Carson gives them all a chance to participate equally in that debate.

It took decades, a long legal battle, and perhaps this compelling play to see what was always right before us.  We are all in this together, no matter who we love.  If that is the only takeaway from Unmarried in America, it will be rightly remembered as an unqualified success.

Those adults who are passionately opposed to same sex marriage should understand that the script chronicles the legal process related to Proposition 8, which did not turn out well for their side.  Carlson’s script is fair to both sides, however, and does not mock, insult, or demean those who opposed Proposition 8.  I would encourage opponents of marriage equality to see Unmarried in America.  It has lessons for all of us, even though they may be difficult lessons.

There is ample free street parking parking near the theater on the surrounding streets.  There is also parking in the adjacent lot, but check the posting at the front door for restricted times. 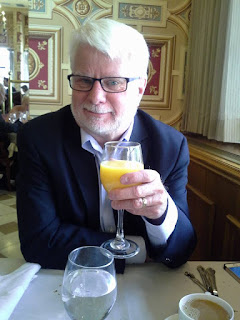 We had an anniversary brunch at the Brown Palace Hotel and Spa.  It’s a classic, and probably the best brunch I’ve ever experienced.  The food, the service, and the ambience are unequaled.  Yes…it’s costly.  Prepare to spend about $54.00 per person; more if you want champagne.  That puts this brunch in the “special occasions only” category, but that’s the target they shoot for.

Besides the usual brunch fare, you’ll get jumbo shrimp (I know…it’s an oxymoron), an elaborate carving station for carnivores, and a full dessert selection including a chocolate fountain with both white and dark chocolate.

If you have a special occasion in your future, the Brown Palace is a great choice.  Reservations are highly recommended.