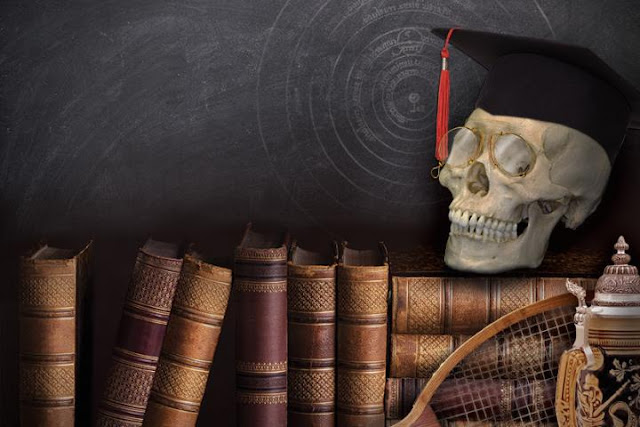 Hamlet is a fictional character in William Shakespeare’s Hamlet, making it unlikely that he and Martin Luther ever met.  Likewise, Johann Faustus is more legend than man, but all three (Luther, Hamlet, and Faustus) have deep philosophical and religious discussions in David Davalos’ script for Wittenberg.  Not only do the actual and fictional characters meet and interact, but at times they careen from profundity to comedy, with somewhat jarring results.  Wittenberg is a prequel to Shakespeare’s classic; but unlike the bard’s tragedy, playwright David Davalos puts the Prince of Denmark in a modern mashup of 16th century ideas, contemporary music, and witty repartee.

Luther is a man of the cloth, deeply troubled by the Catholic church’s selling of indulgences.  His faith challenged, he prepares his 95 theses arguing against the Church practice of profiting from promises to get people to heaven.

Johann (John) Faustus, by comparison, is a man of “choices.”  He’s part hedonist, part philosopher, and a harsh critic of Luther’s religious beliefs.  The two argue their positions, making it apparent that Luther's religion and Faustus' philosophy are, at their cores, incompatible.  Philosophers seek to explain life through facts; religion explains life through faith in a Supreme Being.

It is this clash of existential belief systems that playwright David Davalos focuses on, using the fictional and historical characters to flesh out these mutually exclusive belief systems.  As both Luther and Faustus are on the faculty at the University of Wittenberg, they make their arguments to Hamlet, their promising if indecisive student.
The construction here may seem somewhat familiar to those who have seen the play Picasso at the Lapin Agile.  Actor/comedian/director/writer Steve Martin used a similar fictitious meeting between Pablo Picasso and Albert Einstein to explore the nature of talent and genius.

Davalos’ script, though, lacks a certain balance; Luther gets the worst of the debate at nearly every turn.  Faustus (Lawrence Hecht) is a master of cold logic; he’s an empiricist.  He believes only what he can prove, and considers Luther’s faith to be foolish and misguided.

Luther (Howard Swain) is hardly in a strong position to debate Faustus; he is on the verge of inspiring a revolution against the Catholic church.  Given his crisis of faith and complete distrust of some core Catholic beliefs, he is at a rhetorical disadvantage.  Fortunately for him, Hamlet is so indecisive that he could be persuaded by Luther’s passion if not his logic.

Both Hecht and Swain have juicy roles, and they pump them for every scrap of wit, irony, and profundity they can muster.  Hecht does hedonism with a wink and a smile.  He’s like a kid in a candy shop with a $50.00 bill in his pocket.  Hecht goes from euphoric kid in the first act to defeated, demoralized, and confused when he realizes his life has no real meaning or purpose.

Swain plays Luther as a troubled but devoted believer who is working up the courage to be a heretic.  Swain is exquisite when he goes into raging rants about Johann Tetzel, the Grand Commissioner of Indulgences.  He is sincerely humble when he asks Hamlet (Benjamin Bonenfant) to read his 95 theses.  And Swain is suitably stoic when Faustus confronts him with “choices.”

Bonenfant is a marvelous Hamlet.  He plays along with both Luther and Faustus, working both sides of the philosophical fence.  Bonenfant has his own subtle debate over whether and how to someday become King of Denmark; he shows us how the man we know from Shakespeare came to be.

Mare Trevathan plays “The Eternal Feminine,” which is really four roles here:  Gretchen, a working girl, Helen, a lady of pleasure, Mary, the Mother of God, and Lady Voltemand, an ambassador.  Trevathan rocks the role for every one of these ladies, and she gets to wear some of the best costumes in the show.

Director Timothy Orr is telling a compelling story here, with big ideas, heavyweight characters, and constant nods to the bard.  (Faustus’ room number?  2B.)  The script is a delicate mix of the profound and the comic, and Orr handles each with skill and reverence.  He blocks an imaginary tennis match; Hamlet has a real racket but an imaginary ball.  The scene is funny, which is the intent, but Orr has combined light, sound, and action so well that we can almost see the ball.  In a show with a lot of memorable moments, this scene stands out.

Orr has also used music to enhance the message.  It’s contemporary, and a bit jarring.  After the philosophical debate in the first act, in which Faustus derails Luther at every turn, the audience returns to their seats for the second act to the Rolling Stones’ Sympathy for the Devil.  After the music dies down, the second act opens, and there he is.  Lucifer himself.  Faustus is dressed up for Halloween as the devil incarnate.

Wittenberg is an interesting take on Hamlet, Luther, and Faustus, but overly ambitious.  Had it been based strictly on the philosophical/religious debate, the story would have been more focused.  Scripting Luther with a more aggressive defense of religion would have added some needed balance, as well as historical accuracy.  The clash of big ideas comes off more as a crash of both ideas.  In the end, neither argument is persuasive, even after Faustus rolls over Luther in the first act.  Ironically, Luther lost the debate, but 500 years later, no one remembers Faustus.  Luther, on the other hand, changed the world.


Davalos’ comedy is often inside jokes; besides the Shakespeare references, there are also a number of jokes targeting academia (you can’t do that…”I have tenure!”).  That humor plays well in Boulder, but it is less amusing the farther you go from a college campus.

If you’re a fan of the bard, this is tempting fare.  If you love send ups of classics, this could be your cup of tea.  If you prefer your live theater to deal with profound questions, Wittenberg does that.  If you’re a fan of talented actors pulling out all the stops for their art (I count myself in this group), you’ll love these actors.  There’s a lot to recommend in Wittenberg.  That said, however, I was entertained by Wittenberg, but not enlightened.  I was hoping for both.

Parking near the theater is difficult. Plan to arrive early enough to hunt for a suitable parking spot.  There is a public paid lot nearby at Broadway and Euclid.  Weekends are a flat fee of $4.00, and it’s a short 5 minute walk from the lot to the theater.

If you need to go to Will Call on arrival, it’s one floor below the actual theater.

This show is suitable teens.

We had brunch with friends before the show at Turley’s Restaurant, 2805 Pearl Street, Boulder, 80301.  It was Father’s Day, so we anticipated a big crowd at any restaurant, and Turley’s certainly had a full house.  The wait, however, was short, and when we didn’t immediately respond to a page, they came looking for us.

Turley’s is about a 5 minute drive to/from the theater.  Service was fine, as was the food.  They specialize in “healthy casual” food, with a lot of organic ingredients (including grass fed organic ground beef), and a range of gluten free options.  The food was delicious.  If you order something that includes a “biscuit,” you’ll be very pleasantly surprised.  It’s the biggest homemade biscuit I have ever seen, and it is the perfect complement to any breakfast/brunch choice.  We will be back…