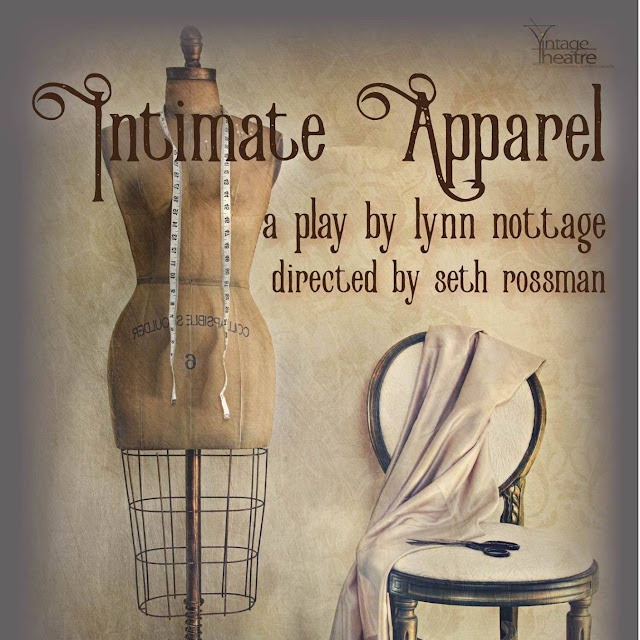 Lynn Nottage has an impressive resume; she won the Pulitzer Prize for drama in 2009 for her play Ruined.  Prior to Ruined, Nottage established herself as a breakout playwright with Intimate Apparel.   That play debuted in 2003 and won a Drama Desk Award (Outstanding Actress, Viola Davis), the Steinberg New Play Award, and an Outer Critics Circle Award for Nottage’s script.

I can confirm that Ms. Nottage has more than earned those awards.  Intimate Apparel is a magnificent script that could be a template for a Master Class in storytelling.  The title is a reference to the character Esther, who is an African American seamstress who makes “intimate apparel” for both hookers and society women.  It’s 1905, she’s single, 35 years old, and living in a New York City rooming house.  Dreary as her life may be, she has a plan:  she wants to open a beauty salon, and has stuffed a significant amount of her wages in her quilt to do so.

Like a lot of dreamers, though, life gets in the way of her dream.  She has a pen pal named George Armstrong, a laborer on the Panama Canal.  His manual labor is more like a prison sentence than a job.  His letters to Esther are romantic, poetic, and deeply deceitful.  Esther is warned about a long distance love affair, but George is a seductive guy on paper, and Esther can’t resist the charm of his letters.

Lisa Young plays Esther as if she’s on a mission from God.  Young turns in a heartbreaking performance, punctuating her lines with nonverbal flashes of emotion.  Whether it’s a wink, a nod, an eye roll, or a gasp, Young lovingly portrays Esther’s every emotion as if it were her own.  She can be shy.  She can be angry.  She can be tender. She can be appalled.  Young rides Esther’s emotional roller coaster with her hands in the air and love in her heart.

There are two men in Esther's life; George Armstrong (Cris Davenport) is obviously one of them.  Mr. Marks (Seth Maisel) is the other.  Both are splendid actors, and both turn in achingly honest performances.

Cris Davenport is a sincere, romantic gentleman in the first act, giving the audience every reason to believe that he is a marvelous match for Esther.  Davenport’s delivery, as he reads his letters to Esther, is dripping with sincerity.  In the second act, he turns his character around, becoming a boozing, gambling womanizer who takes advantage of anyone and everyone.  Esther is a victim, but certainly not the first nor the last to be betrayed by the creep that Davenport creates.  At the end of the show, the cast received a standing ovation.  Davenport got booed.  That’s how good his performance was.  He played a contradictory characters so convincingly that the audience didn’t forgive him when the lights went up.  That, in my experience is unusual.

Seth Maisel, on the other hand, plays Mr. Marks with total honesty.  He’s a Russian immigrant, Jewish, and working as a fabric merchant in the New York City garment district.  Maisel’s Russian accent is spot on.  Esther shops in his store, and he always finds her the best fabrics and gives her his best price.  Maisel has a special chemistry with Young; the two are mutual admirers who cannot reveal their attraction to each other.  It’s a delicate dance, a pas de deux, that Maisel and Young carry off like dancers from the Bolshoi Ballet.  That they can never be a couple is heartbreaking.

Debbie Faber’s period costumes are special, from the bloomers, corsets, and dresses to George’s work clothes for digging the canal.  Director Seth Rossman had help from his two Assistant Directors, Colette Brown and Liz Nye.  Their combined efforts resulted in a seamless period piece showcasing Esther’s isolation and frustration.  Though no Dialect Coach is credited in the program, the several dialects (urban New Yorker, Russian Jew, and African American slang and cadence) used by the cast were impressive.

Nottage’s script tell a captivating story, but not without some distractions.  While neither of the lead characters can read or write, that detail is lost after we learn of it.  Armstrong’s transformation from sincere romantic to ruthless scoundrel is abrupt and jarring.  But these are minor quibbles; Nottage’s story is, for me at least, unforgettable.

The deaths of these seven people in three locations in the span of four days has made a lasting impact on those communities, and on the nation as a whole.  Those events were not lost on me as I watched Intimate Apparel on the Vintage Theatre stage.

I can’t help but wonder how 110 years after Nottage’s New York City, and more than150 years after a bloody Civil War, we still haven’t figured out how to deal with our most important problems.  Racism may not be at the root of all, or even any, of these recent incidents.  It’s too soon to tell.

That said, though, there is little doubt that racism is deeply ingrained in our society.  The segregation of the classes in Nottage’s Intimate Apparel is less formal now, but just as pervasive.  There is not much question that Esther, looking to break out of poverty by opening a beauty salon, would have a difficult time achieving her dream.

Nottage uses a metaphor in her script:  quilts.  Quilts are carefully created works of fabric art that take unrelated scraps of cloth and sews them into a beautiful patchwork of colors, textures, and functionality.  Try as we might, we have not yet figured out how to create such a quilt of the many colors, cultures, and people in the United States.  “United” should appear in quotation marks because we only have the illusion of unity.

Until we can create such a quilt, blending our many disparate parts into a functional whole, we cannot have peace, opportunity, and the promise of the American Dream.  Intimate Apparel is a reminder of how long that quilt has eluded us.

There is ample free street parking in the area.  This show is suitable for all ages.

There are two quilts used in Intimate Apparel.  Those quilts were loaned to the the theater for the run of the show.  Because there is a back story about one of the quilters, I have reproduced it below as information.  Traci Chocol got pregnant with twins at age 50.  The twins died in childbirth, as did Traci.  Her mother is Eileen Burnley, a mother, a quilter, and no doubt a woman in profound grief.

Saying goodbye to Traci Chocol and her twins.

Traci's mother Eileen Burnley spent hours helping me to learn how to knit, quilt and just create pretty things in preparation for my current role as Esther Mills-Armstrong in Intimate Apparel at Vintage.

I can't imagine the pain this mother had to endure nor that of her husband Todd. But I sit here celebrating LIFE!

In these times of such fear and hatred I stand in awe of Eileen and her strength and guidance for her family and her continued love and support for me. With all she is going through she still has lifted me!

Thank you to the real Esther... Eileen Burnley

TICKETS HERE:  This show has closed.

Posted by Bill Wheeler at 12:39 PM No comments: Links to this post