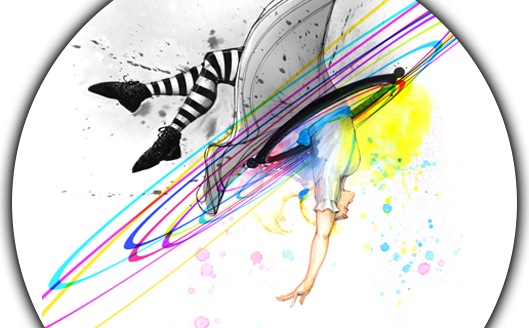 I Adapted by:  David Catlin

From the works of Lewis Carroll

Produced in association with: The Actors Gymnasium

I try not to do spoilers, so nothing that follows will expose too much of the plot of Lookingglass Alice.  That’s less because I avoid revealing too much, but more because I don’t know how I could possibly do so.  The plot here, like Lewis Carroll’s Alice’s Adventures in Wonderland and his follow up Through the Looking-Glass, and What Alice Found There, are works of abundant nonsense.  That’s not a criticism; it’s Lewis Carroll’s style.  In that regard, Lookingglass Theatre Company’s adaptation is true to the original.

Still, a story told in nonsense and gibberish can be a challenge for adults; kids may need extra help getting the story straight.  Here’s a few pre-show topics you might want to bring up before taking your kids to Lookingglass Alice:

1.  Lewis Carroll is a nom de plume; his real name was Charles Dodgson.

2.  Lewis Carroll/Charles Dodgson appears in Lookingglass  Alice as a character.

3.  Parts of the story track well with Caroll’s work, so being familiar with that work is helpful.

4.  Carroll/Dodgson leads Alice to the rabbit hole, and she goes down it, just as in the original story.

5.  Once Alice (Lauren Hirte/Lindsey Noel Whiting) goes down the rabbit hole, the story is structured like a chess game, with some of the characters representing chess pieces.

5.  Alice wants to be a queen, but to do so, she must move as a chess piece (a pawn, actually) through 8 squares on the chess board.  She meets other characters on each square, and must interact with them before moving on.

6.  In chess, a pawn that moves through the entire board is usually promoted to queen.

With that as background, kids will probably be able to follow the story.  Even without some pre-show preparations, though, kids of all ages will be astounded by the acrobatics of the cast.

At least partly inspired by Cirque du Soleil, Lookingglass Alice is a Master Class in the power of technical innovations and visual surprises.  The actors move with the grace of a ballet dancer, the strength of a weightlifter, and the courage of a trapeze artist.  I doubt there are actors anywhere in better physical condition than the cast of Lookingglass Alice.

Parts of Lookingglass Alice are absolutely stunning.  An actor suddenly suspended upside down approximately 30 feet over the stage is difficult to accept.  My first thought was “no…it must be a mannequin.”  Wrong.  “Humpty Dumpty had a great fall.”  Did he ever.  It’s a heart stopping moment of utter horror.  The Red Queen (Molly Brennan) makes a grand entrance, and she is, shall we say, imposing.

The role of Alice is played alternately by Lauren Hirte and Lindsey Noel Whiting, presumably due to the enormous physical challenge of the role.  Hirte was Alice at the performance I attended, and she is astonishingly strong.  She is also very agile; her aerial scenes are beautifully crafted works in a suspended alternate reality.  She’s onstage for the entire performance, and she makes the physical challenges appear effortless.

Samuel Taylor plays the White Knight, perhaps the most “normal” character onstage with Alice.  He plays the White Knight with a dose of self deprecating humor, getting the biggest laughs in the show.  If you bring your kids (or grandkids), they will very much appreciate his frequent but tardy command:  “DISMOUNT!”

The rest of the cast (Adeoye, Molly Brennan and Kevin Douglas) bring a hallucinogenic chaos to the proceedings.   Adeoye and Douglas stand out with multiple flying folding chairs, picking them out of the air and racing around the stage with them.

There’s a lot to recommend in Lookingglass Alice, and for anyone interested in new, creative ways to tell a story, it is definitely a “must see.”  Short of Cirque de Soleil, you will not find anything as inventive, as innovative, and as visually stunning as Lookingglass Alice.

There was, however, a glitch in the performance that raised some eyebrows, mine included.  Lookingglass Alice depends heavily on technical effects to make everything work.  Technical effects can be very powerful, but if they don’t work as planned, the results can be embarrassing at best, and dangerous at worst.  In this case, the glitch literally stopped the show.

In the very first scene of Lookingglass Alice, a technical effect went awry.  It was not,
fortunately, one that involved the safety of the actors.  Rather, it was a set piece that failed to perform as planned.  It was part of a delicate illusion; when the set piece failed, the illusion failed.  The audience was taken out of the story for 5-8 minutes and the actors were ordered to clear the stage while stage hands worked to fix the problem.

I understand that sometimes things go wrong; I’ve seen it happen before.  However, this glitch raises some concerns:
To the eternal credit of the cast and crew, the problem was resolved and the show, as it must, went on without a hitch.  They displayed the highest level of professionalism under circumstances that they (hopefully) rarely encounter.

I do hope that this incident will cause the company to redouble its efforts to insure that all effects and rigging are scrutinized and tested prior to performances to insure the safety of the cast and crew.

Despite my alarm at the failure of a set piece, Lookingglass Alice is a vibrant show with a tremendous cast.  The audience is left with this thought at the end:

Indeed.  Sometimes the dream comes true, but it turns out to be less than we expected.  That’s the message for Alice; her dream to be a queen didn’t turn out as she thought it would.  So it is with our own dreams.  The reality is sometimes harsher than we expect.

Event parking at the DCPA garage is $12.00.  Metered street parking in the vicinity is rare.  Although there may be surface lots available nearby for less than $12.00, it’s hard to beat the convenience of the DCPA garage.  Spend the money.  It will save you time and what could be a fairly long walk to and from the theater.

Lookingglass Alice is arguably a children’s show, and there is no question that children of all ages will enjoy the circus atmosphere, the amazing gymnastics, and the colorful costumes.  However, younger children may have trouble following the script.

We ate at Rodizio’s Brazilian Steakhouse, 1801 Wynkoop Street, Denver.  A full Rodizio is

$34.99 for dinner, less if you just want the salad bar.  It’s a traditional Brazilian steakhouse, with assorted meats delivered on skewers to your table by the gauchos.  It’s essentially a steak buffet, but the food comes to you.  Does it get better than that?  Menu here.

Rodizio’s is about a 10 minute trip to/from the theater, using the 16th Street Mall shuttle bus (free).  If you park at the DCPA garage, it’s a short (2 blocks) walk to 16th Street to get the shuttle, and another block or two from the Wynkoop shuttle stop.

Cheshire Cat and Others:  Adeoye

Red Queen and Others:  Molly Brennan

Mad Hatter and Others:  Kevin Douglas