If you have a Scrooge in your holiday plans, the Arvada Center has an answer to your problem:  Irving Berlin’s White Christmas.  If seeing this festive holiday show doesn’t improve his (or her) attitude, nothing will.

Berlin’s music is unquestionably the strength of the script, which is essentially a live performance of the 1954 film of the same name.  The film premiered as musical theater in 2004.  The story line involves Army buddies Bob Wallace (played in the film by Bing Crosby) and Phil Davis (Danny Kaye in the original) who make a successful song and dance team after World War II.  They team up with the Haynes sisters for a gig in Miami, but due to some mischief by Phil they end up in Vermont instead.  The ensuing romance and reunion with Army buddies makes for a perfectly White Christmas.

The story depends on some convincing characters, and the Arvada Center cast delivers on every one of those characters.  The combination of Ben Michael (Bob Wallace) and Lauren Shealy (Betty Haynes) is superb; they create abundant romantic tension as they reject each other at first sight then slowly fall in love before our eyes.  Michael and Shealy tug at our heartstrings, but never more so than in Berlin’s Count Your Blessings Instead of Sheep. It is a improbable moment when they realize that they are falling in love, but Michael and Shealy sell it.  Completely.  Both are gifted actors with impressive voices, and they are locked in for White Christmas.

Cody Williams (as the somewhat goofy skirt chasing Phil Davis) and Erica Sweany (as the vampy Judy Haynes) make a pitch perfect couple, singing and dancing their way through assorted shenanigans.  Sharon Kay White shines as Martha Watson, belting out a memorable Let Me Sing and I’m Happy.  Darcey Keating shares the child prodigy Susan Waverly role with Darrow Klein; it was Keating on the boards on opening night.  She charmed everyone in the room with her zeal and a huge stage presence.

The cast is high energy, delivering several unforgettable song and dance production numbers.  The best of these is the second act opener, I Love a Piano.  It’s a full on singing and tap dancing spectacular, featuring Kitty Skillman Hilsabeck’s choreography and Chris Campbell’s eye popping costumes.  I Love a Piano was interrupted twice with spontaneous applause, and got an extended ovation when it was over.

Director Gavin Mayer gets every part of White Christmas right, from the patriotic moments to the romantic mischief and the upbeat holiday message.  This is a huge cast (23 by my count, not including understudies), and Mayer has every one of them operating in overdrive. Brian Mallgrave’s set design is functional and spans an impressive variety of scenes, including a battlefield, the Ed Sullivan Show, the Regency Room, and a barn in Vermont.  Music Director David Nehls delivers his usual excellent soundtrack with an accomplished orchestra.

Opening night at White Christmas was a packed house; the audience ate it up and gave the entire cast (not just the principals) a rousing standing ovation.  Obviously, Berlin’s music is a big part of that.  Who can resist "dreaming of a white Christmas?" Troubled by your daily stressors?  Count Your Blessings Instead of Sheep.  Feeling overwhelmed?  Just remember “blue skies smiling at me, nothing but blue skies do I see.”  Irving Berlin’s music was fitting when the film was made; today those same tunes are best called classics. 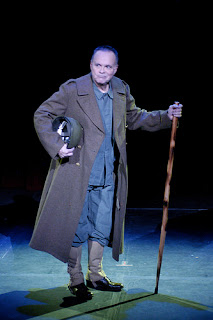 All that said, though, there’s more to this story than just romance and candy canes.  There’s some leadership lessons, brought to us by Paul Page.  He is perfectly cast as General Henry Waverly, and he delivers the most poignant moment in the show:

“Well, ladies and gentlemen, I have some news.
President Eisenhower has invited me back to active
duty. Back into the noblest profession I know. Well,
backwards is a way a soldier does not go.”

Page drops his final lines on the Arvada stage like a ton of bricks.  The impact is immediate.  We don’t see Page as an actor.  We see him as a wise General who knows how to lead both in battle and in life.  While White Christmas is a nostalgic look back to a simpler time, Page’s moment in the sun reminds us the the way forward is, well, forward.

A friend mentioned to me before the show that White Christmas is perhaps the perfect show at the perfect time. In a world that seems ominously dark and evil, we are reminded of what really matters.  Love, valor, and leadership shine brightly in the snow globe that is White Christmas, and that message is just as powerful now as it was 60 years ago.

White Christmas might even make your own personal Ebenezer Scrooge say “Merry Christmas!” this year.

I was unable to meet my self imposed deadline of submitting this review within 48 hours of the final curtain.  That was partly due to having company for the Thanksgiving holiday, and partly because of the devastating events not far from my home.  We shop regularly at a King Sooper’s grocery store there.  I have mingled with the Planned Parenthood supporters there twice.

Theater puts us in the position of a spectator so we can see our world from a bit of distance.  We can see good, the bad, and the ugly, live and on stage.  But sometimes, it also helps us heal.  Writing this review took me away from tragedy and back to the better side of humanity.   White Christmas is from a different time, but it is a potent antidote to the toxic times we now live in.

PHOTO CREDITS:  The Arvada Center for the Arts and Humanities. 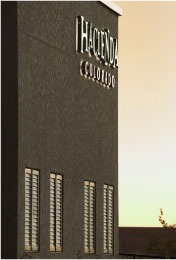 We had a late lunch, so we were looking for just appetizers on our way to the Arvada Center.  We have eaten at Hacienda Colorado before, but not at the 5056 S. Wadsworth Way, Littleton location.  It was happy hour, and right on our way, and we’ve been consistent fans of the upscale Mexican menu at other Hacienda Colorado locations.  We were not disappointed.

Draft beers are $3.25 per pint at Happy Hour, and the selection is impressive.  I had a beer and Roxie had a virgin frozen margarita, and we ordered a bowl of queso to go with the complementary chips and salsa.  Our total tab was less than $12.00, and the service was quick and friendly.