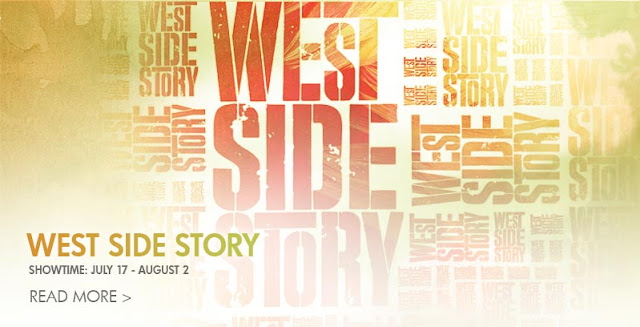 Produced by: Inspire Creative and The PACE Center

West Side Story is a legendary musical with perhaps the most daunting lineup of theater talent ever; William Shakespeare’s Romeo & Juliet inspired the play, Leonard Bernstein wrote the music, and Stephen Sondheim penned the lyrics.  It’s difficult to imagine a more formidable list of talent.  It’s the theater version of an imaginary 1960’s concert with legends like Jimi Hendrix, Janis Joplin, and Jim Morrison.

The musical sets Shakespeare’s tragedy in a gritty 1950’s New York City neighborhood, where warring gangs (the Sharks and the Jets) carve out their turf on a daily basis.  There is a racial component; the Jets are anglos, the Sharks are Puerto Ricans.  Tony and Maria are the contemporary lovers that Shakespeare created as Romeo and Juliet in 1595.  The tragedy then, and the tragedy now, more than 400 years later, is that a “forbidden” love ends badly.  Those “forbidden” issues have changed since 1595, but we are all well aware of the current issues surrounding controversial love and marriage.

The PACE/Inspire Creative has delivered a powerful West Side Story, beginning in the very first scene.  The clanging, banging clamor of steel on steel grips the audience before the first lines are spoken.  Director Ralph Neumann got our attention with that initial burst of noise, and he didn’t let go for two and a half hours.  Neumann has a huge cast; one’s second impression, after the clatter of the opening scene, is that this West Side Story is big.  Very BIG.  The PACE Center main stage is large, and Neumann has filled it with talent, color, action, and music.

West Side Story is perhaps one of the best musicals every written, with music reminding us of opera, and dancing that includes Latin moves, ballet, and modern dance.  PACE/Inspire Creative have no fear of taking on the challenge, and with the leads (Darien Raymond as Maria and Senhica Klee as Tony) have stunningly beautiful voices.  Klee’s classical opera training is obvious; his tenor solos are hypnotic.  Raymond’s vocals are as clear and true as a tuning fork.  When Klee and Raymond combine for a duet, the result is tangible vocal magic.

While all the principal cast members have marvelous voices (Malorie Jo, playing Graziella here, can sing lead with the best of them), the “Somewhere Trio” was an unexpected delight.  Emma Maxfield, Mirade McGloin, Christa Vrabel take the stage, each doing a solo part of the classic tune Somewhere.  Emma, Mirade, and Christa take this classic song and make it new again.  Each is dressed in angelic white, and each has an angelic voice.  For those who plan to see West Side Story, sit up, take note, and savor the trio.  They are special.

There are several large production numbers in the show, and again, Neumann has pushed the limits of his cast.  I counted 49 credited cast members in the program; at times more than 30 of them are onstage. Choreographer Liane M. Adamo puts them through some difficult dance moves flawlessly.  Watching a dozen or more couples synchronized in eye popping costumes (thanks to Costume Designer Rosemary Smith) is the best part of a production number.  Neumann and his cast & crew put on a dance clinic here.

West Side Story is one of Stephen Sondheim’s early works, and possibly his best.  We all know the hit songs:  “Maria,” “America,” “Tonight,” “I Feel Pretty,” and “Somewhere.”  Music Director Tanner Kelly provided the the arrangements and  orchestration for these classics, while Blake Nawa'a conducted the 14 talented musicians in the pit.  They get every note right, and the sound mix (Allison Hill, Sound Design) never overpowers the voices.

There is ample free parking at the theater.  If you are arriving via Parker Road/Colorado Highway 83 (which is the only way I know how to get there), you will go east at Main Street.  Heads up; this is a traffic bottleneck.  Take it slow…there are crosswalks every 50 feet or so, and pedestrians may dart out into traffic at any time.

One of the actors, Ben Hilzer (Action), has dedicated his performance to his late friend Ryan.  From the program:  “You originated this role for me, Ryan.  Your impact on the world (on and off the stage) will always be remembered and cherished.  I can’t thank you enough for everything you’ve done.  This is for you, pal.  RMFD.”

I did not know Ryan, but I’m still sorry for your loss, Mr. Hilzer.  I’m sure he would have been very proud of your performance.  Ryan was obviously an inspiration to you and to others.  I also lost someone dear to me, and she was my inspiration.

I know, it’s a cliché, but it gets better...with time. 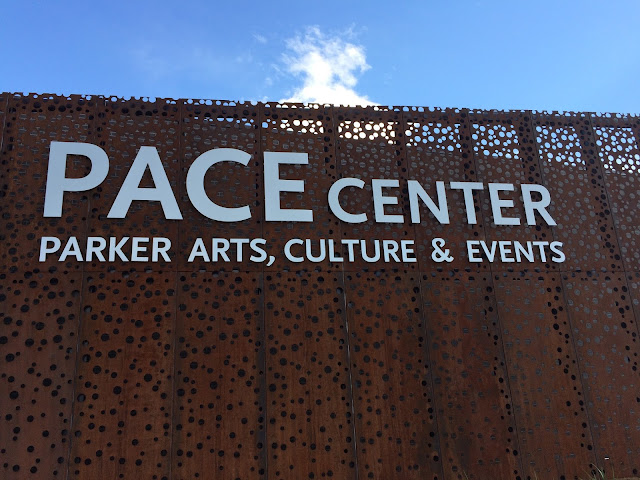 I stopped at the Tailgate Tavern, 19552 E. Main Street, Parker.  It’s a 5 minute walk from the the PACE Center parking lot.

I tried a pizza, which the menu described as “personal” sized.  I could only eat half of it.  I almost skipped over it on the menu because the description had the word “vegan” in it.  In fact, it’s called the “Angry Vegan” pizza.  Pepperoni, bacon, ground beef.  See photo and decide for yourself, but I’m proud to say I ate “vegan” at the Tailgate.

I got fast, friendly service, despite the full house on a Friday night.  Recommended.