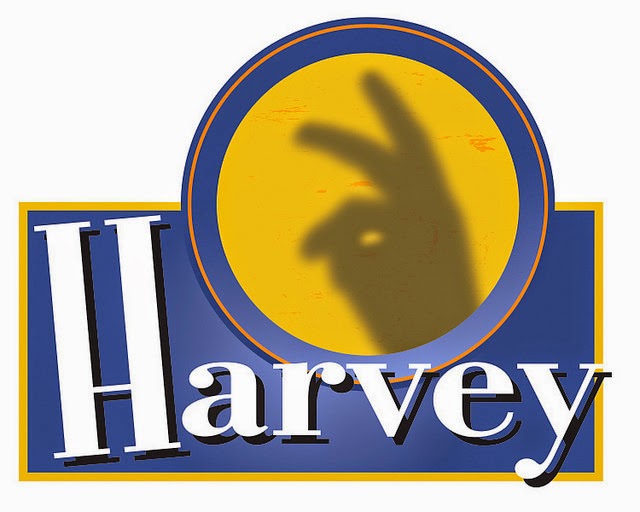 It took Denver native Mary Chase over two years to write the script for Harvey, but the finished product quickly became a huge hit.  The show ran for over four years on Broadway, and was made into a major motion picture starring Jimmy Stewart.  She also won the Pulitzer Prize for drama in 1945, becoming the only Coloradan to ever receive that honor.  Now considered an American classic, Harvey continues to entertain audiences 70 years after it first opened.

For those who have successfully avoided both the play and the film until now, here’s a brief description of the show.  Harvey is not exactly the lead character.  He’s a six foot tall imaginary rabbit.  He’s visible only to Elwood P. Dowd, who actually is the lead character.  Dowd’s family is embarrassed by his delusions, and tries to keep him secluded from polite company.  When that is no longer possible, they try to have him institutionalized.  As one might imagine, Elwood has numerous hilarious and awkward interactions with his family, society, and the staff at the institution.

The Arvada Center production of Harvey is exactly what you’d expect.  The cast is exemplary, the production values will make other companies salivate, and the script is as funny as it is timeless.

When I say that the production values will make other companies salivate, I mean it.  Scenic designer Brian Mallgrave’s splendid set depicts two locations; Elwood’s home and the sanitarium.  The location changes once in each act.  In what is a rare experience for me, the set gets an ovation from the audience both times it changes.  That’s right.  Twice.  Even though the audience has seen the change in the first act, spontaneous applause erupts again in the second act.

Director Gavin Mayer deserves some credit for the scene changes.  His stage hands are in character as domestic help, in period costumes.  The effect is a flawless, seamless continuity between the two locations.  Mayer’s touch can also be seen in the facial gestures of his cast.  In the smaller Black Box Theater, those facial gestures are visible to the audience and punctuate the laugh lines with physical cues, enhancing the script.

Lighting Designer Robert Byers incorporates period appropriate ceiling fixtures for both locations.  The fixtures drop into the set and change the mood from home to hospital and back again.

The costumes for Harvey are not just period appropriate; they are thought out in exquisite detail.  Veta Louis Simmons (Kate Gleason) wears a beautiful blue dress with matching shoes.  Myrtle Mae Simmons (Missy Moore)wears shoes that match the trim on her dress.  Myrtle is wearing sheer stockings, complete with a seam in the back.  Elwood’s suit matches beautifully with his two tone leather oxford shoes.  The fit, the finish, and the detail that went into costuming the cast makes Harvey a feast for the eyes.

I have a message for all those carpenters, electricians, stitchers, seamstresses, and assorted other craft persons who work behind the scenes at the Arvada Center.  You don’t get standing ovations, but you should.  Sometimes you may wonder why you have to be so detailed, so thorough, and so fussy about the little things that might not even be visible to the audience.   The reason is that you work in a professional theater.  Those small details do matter.  They matter in the sense that everything on stage looks perfect, and in the sense that the absence of that perfection would detract from the production.  So here’s a hat tip to the Arvada Center crew that consistently creates an excellent theater experience down to the smallest detail.

As for the performances, I can sum it up by saying that there’s not a weak link anywhere in the cast.  Missy Moore (Myrtle Mae Simmons) plays her role with innocence and vulnerability, and with a lot of physical humor using her facial gestures.  Kate Gleason (Veta Louise Simmons) shines as she pretends to care for her brother Elwood while actually trying to hide him and sell his house.  Torsten Hillhouse (Elwood P. Dowd) is a little less folksy than the Jimmy Stewart version of Dowd, but he is an eminently likable Dowd I’d love to have a beer with.  Stephen Cole Hughes (Duane Wilson) has an excellent sense of comedic timing.  Audra Blaser (Ruth Kelly, R.N.) is naive as Ruth, hoping to snag a doctor for her spouse, and righteously indignant when she is spurned.  This is a talented cast all around, and Director Gavin Mayer has put the right touch on their talents here.

One of the things I really like about Harvey is how it questions what we consider "normal."  You would be correct to wonder at times who is normal and who is crazy in this cast.  Sometimes the "normal" person is not immediately obvious to us.  Harvey at the Arvada Center is a great show, whether you are seeing this script for the first time or for the tenth time.  You don’t have to take my word for it.  The audience gave the cast a standing ovation.

Harvey is another gem in the Arvada Center crown.  It’s in the smaller theater, so tickets may become scarce.  If you are thinking about seeing Harvey, act quickly.  You will not be disappointed.

Local playwright Mary Chase was born to Irish immigrant parents in Denver in 1906.  She graduated from Denver West High School, and attended both the University of Colorado and the University of Denver (which granted her an honorary Doctorate of Letters degree in 1947).  She was inducted into the Colorado Women’s Hall of Fame (1985) and the Colorado Performing Arts Hall of Fame (1999).

We stopped at Bennett’s Barbecue, 7490 W 52nd Avenue, Arvada.  It’s a short 10 minute drive north on Wadsworth to the Arvada Center.  Featuring the usual barbecue meats and sauces, Bennett’s also has some great specials.  I had the Tuesday night special; all you can eat pork shoulder with fries, bread, and cole slaw for $11.99.  For the truly hungry and adventurous, you can’t beat the Chuckwagon:  Beef Brisket, Pork Shoulder, Sausage, Hickory Smoked Chicken & St. Louis Ribs for $19.99.  Menu here.