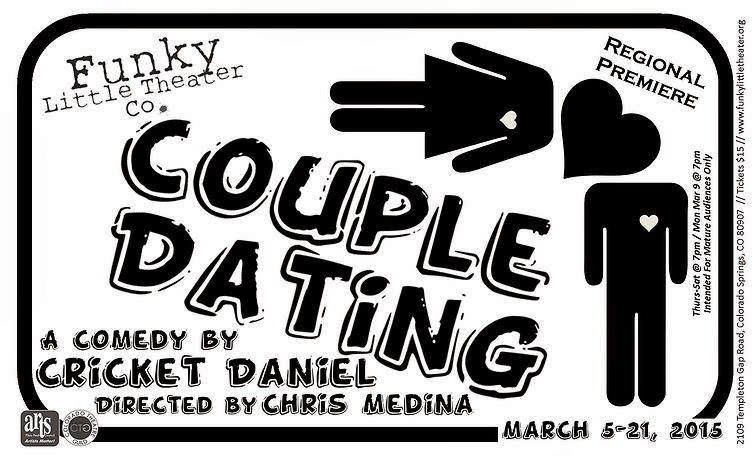 If you’re a relatively new married couple, how do you meet new “couple” friends?  Your single friends don’t get the couple thing, and besides, you can’t go out doing “single” things if you’re married and have a kid.

Well, there's always Couple Dating.  In short, couples get matched up for a dinner party to see if there’s a seed that could sprout into a couple friendship.

If you’re skeptical, you’re onto something.  Dating as a single is hard enough; simple math tells us that Couple Dating would be twice as hard.  Or maybe three times as hard.

Playwright Cricket Daniels has fun with this topic, giving her friend seeking couple, Tess and Bobby, three tries to find a suitable couple friendship.  I won’t spoil the story here, but you should expect such an experiment to be fraught with potential and actual problems.  And it is.

Tess and Bobby have a child, presumably around 2 years old, but never seen or heard.  (The script might benefit from at least an occasional reference to the kid sleeping in the next room.)  Tess thinks they should find some friends like themselves, which is to say, young, married, and with a youngster.  She saw a story about “couple dating” on the Today show, and wants to give it a try.  Bobby, who is not the most sociable guy you ever met, is dragged kicking and screaming into the experiment.

Tess sets up the first dinner with a couple that she has only met half of (the wife/mother).  She then moves on to two other couples, each of which she knows less well than the first.

What could possibly go wrong?

In a word, everything.  I won’t reveal the details.  You have to buy a ticket for that.  However, I will say that the details are well worth the price of admission.  It’s a new spin on the pit falls of dating, and if you ever find yourself in a “couple dating” situation, this show may increase your chances of survival.

Alicia Franks (Tess) eagerly displays her complete confidence in televised fads, in a spot on New York/New Jersey accent, no less.  (The show is set in NYC.)  Husband Bobby (Jonathan Herrera) is a working stiff with drinking buddies, a wife, and a kid, all of which seems to be an adequate social network for him.  His objections to 3 dinner parties in a week go unheeded, and the game is on.  Franks is completely convincing as the naive stay-at-home mom looking for new friends.  Herrera is suitably annoyed, and willing to sabotage the whole idea at times.  I think he may have dropped a line or two, but his performance overall made the entire premise work.

The couples in Couple Dating show up two by two, starting with Jason (Grant Langdon) and Suzanne (Hilary Hudson).  Langdon is smarmy and conceited, and clashes with Bobby right away.  Like Tess, Suzanne tries to minimize spousal discord to little effect.

Langdon and Hudson are followed by Lauren (Jennifer Westrom-Crabtree) and Toni (Carrie Chesney), creating an exceedingly awkward situation salvaged only by Toni’s Harley Davidson dealership.  Chesney plays her part with a wink and a nod, showing extreme patience with Bobby while snickering about his primitive inquiries.

We finally get dinner with Scott (Alex Niforatos) and Nathalie (Emma Colligan), and abundant hilarity ensues.  There is an obvious misunderstanding going on for 5-10 minutes, one that is obvious to the audience but invisible to Tess and Bobby.  That they don’t see it coming seems somewhat contrived, but the “big reveal” is the most delicious moment in the show.  Niforatos and Colligan go from ecstatic anticipation to complete humiliation in the wink of any eye, and it’s a comedic climax you won’t soon forget.

Chris Medina’s direction is tight and focused, and the pace is quick.  His set is detailed but a little clunky at times, requiring actors to enter and exit out of view of the audience.  Jeremiah Miller’s lighting design splits the kitchen from the living room to follow the actors, darkening one when lighting the other.  This is perhaps the most technically challenging show Funky Little Theater has put on in its new space, and that they were able to meet those challenges bodes well for future productions here.

Couple Dating is entertaining and thought provoking.  Yes, it’s a comedy, but one with a subtle message.  If you’re going to be meeting new people, it helps to do your homework, whether you’re single, married, or other.  Random samplings of interested parties often yields a lot more chaff than wheat.

This show contains adult situations and adult language.  Recommended for adults only.

There is ample parking in the strip mall parking lot in front of the theater, as well as on surrounding streets (no meters).


Toni:  Carrie Chesney
Posted by Bill Wheeler at 7:24 AM