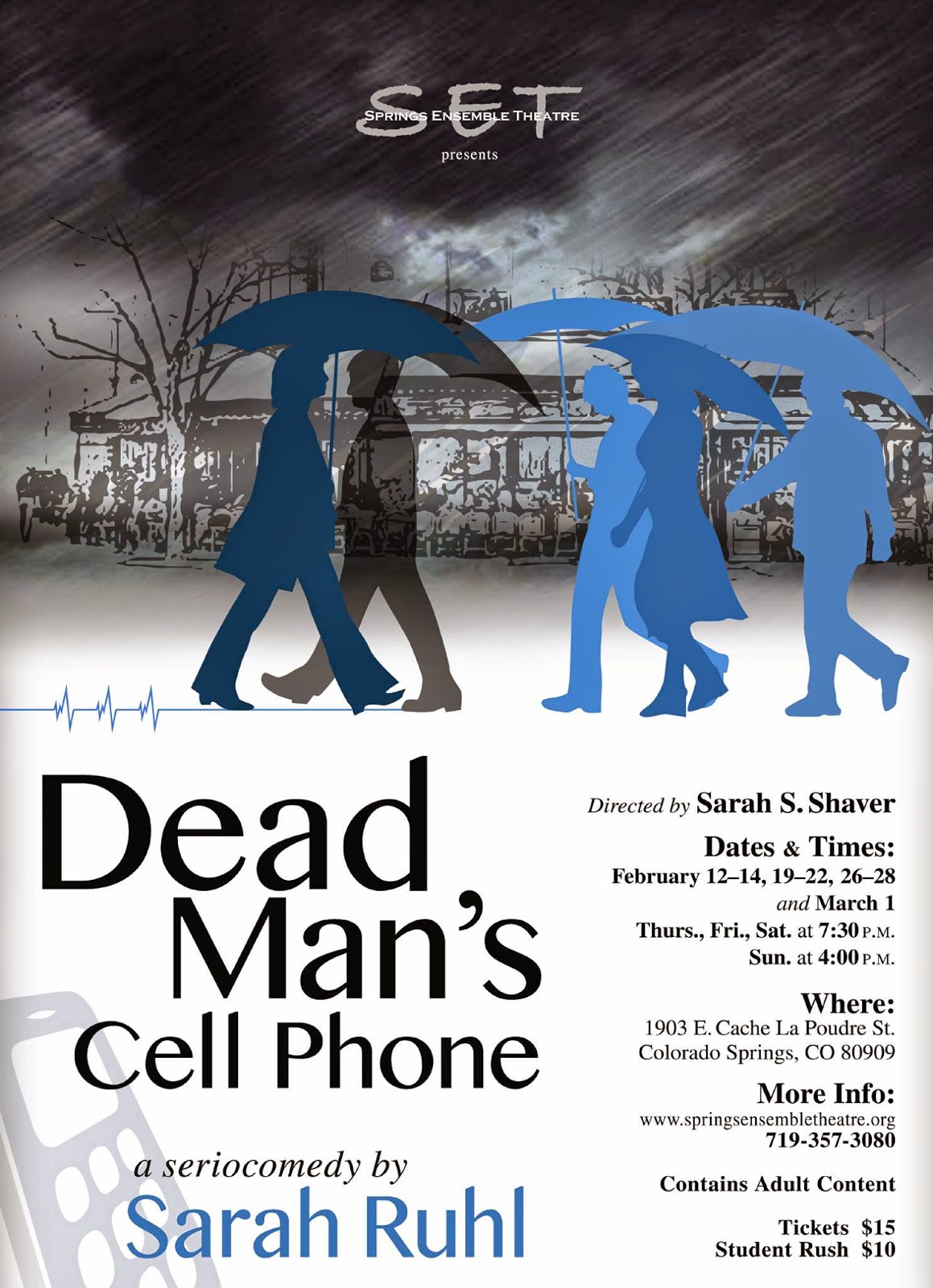 If you don’t have a cell phone, you’re in a pretty small minority (90% of American adults have one).  If your cell phone is a dumb one (as opposed to a smart phone), you’re also in the minority.  They are ubiquitous.  Even 83% of boys and 84% of girls have them by the time they’re in middle school.

It would be an understatement to say that mobile phones have changed the way we communicate.  Whether the changes have been good or bad may depend on your point of view, but there is little debate that the impact has been significant.

Sarah Ruhl’s script for Dead Man’s Cell Phone explores the relationship we have with our phones, and with our friends and families.  For Ruhl, mobile phones are intrusive and inadequate substitutes for the real communication we need to have with each other.

Dead Man’s Cell Phone (hereafter DMCP) begins in a nearly deserted cafe.  A man sits at one table, and a woman across the room is reading a book at a second table.  His cell phone rings, but he doesn’t answer it.  The woman is annoyed at 1) the intrusive ringing, and 2) the rude man who won’t pick up his call.  The phone eventually stops ringing, but less than a minute later, it rings again.  And again.  And again.

The woman finally gets up, crosses the room, and confronts the man, asking him if he was going to answer his phone.  He ignores her, because he’s dead.  The phone, however, keeps ringing.

There’s much more to the story, but to avoid spoilers, let’s just say that the woman cannot resist answering a phone when it rings. The story that follows is sometimes hilarious, sometimes dispiriting, and often profound.

Jenny Maloney plays Jean, the woman in the cafe whose life changes when she answers someone else’s cell phone.  Maloney deftly maneuvers through a minefield; she must credibly adopt the phone and it’s late owner while appearing rational in every other respect.  She pulls this off well.  We somehow relate to her interest in bringing closure to the deceased’s family members, even though it would be much easier for most of us to just walk away.  Maloney’s strength here is that once she decides to act, it’s too late for her to turn back.  She jumps into her character with her eyes open, and doesn’t flinch for an instant, no matter how difficult the situation becomes.

Warren Epstein is marvelous as Gordon (also known as the “dead guy”).  Playing a dead guy is harder than it sounds.  Epstein spends the entire first scene in suspended animation.  Try it sometime.  Remaining motionless for 10-12 minutes while 50 people are watching you is difficult.  Epstein is the acting equivalent of a mannequin in the first scene.  But as they say on late night infomercials, “but wait, there’s more!”  Epstein delivers a superb monologue in the second act, humanizing a dead guy who was pretty repugnant when he was alive.  When he's finished, we see Gordon as a surprisingly likable guy.

Karl Brevik may well be the star of this production.  He plays Dwight, Jean’s love interest.  Brevik’s Dwight is shy, naive, and has a justified inferiority complex.  He works in a stationery store, but more on that below.  Brevik has an innocent charm, and when he turns it on, it’s not just Jean who can’t resist him; the audience can’t help but love him too.  He brings Dwight out of a shell he has lived in for his whole life, and we are cheering him on every step of the way.

Jane Fromme (Hermia), and Sue Bachman (Mrs. Gottlieb) are solid in their roles, and both add a lot of the humor that Ruhl has sprinkled throughout the script.  Bachman’s eulogy for Gordon is a hoot, and Fromme’s overdose of alcohol makes for some outrageous fun.  Erin King (The Other Woman) plays Gordon’ mistress with a suitable mix of attitude and glamour.

The fact that Dwight works in a stationery store provides an interesting balance to the underlying message here.  We know that cell phones are somehow at the root of all of Jean's problems.  Dwight’s work at the stationery store is decidedly old school; pens and paper are hardly new devices.  His customers still communicate on paper, and paper is the medium that lights the spark between Dwight and Jean.  They both like the look, the feel, the texture of fine papers.  Director Sarah S. Shaver drives home the paper theme at the end of the scene in the stationery store with a confetti shower.  The beauty of Dwight and Jean sharing their love of old fashioned paper, followed by the avalanche of confetti, reminds us that there are still some things the a cell phone will never be able to do.

Springs Ensemble Theatre (SET) put a lot of thought into staging DMCP.  The audience is dissected by the stage; approximately 25 seats on each side of the actors.  The effect is almost like looking in a mirror; we can see the actors and ourselves behind them.  SET has put those actors on one of the slimmest of stages I have ever seen; it’s more like a tightrope.  Perhaps 8 feet wide and 30 feet long, the stage resembles a bowling alley more than a typical theater.  The action is compressed into this tiny space, giving us a very close look at what would otherwise be a very large room, be it a cafe, a church, or a dining room.

Ruhl’s message that digital devices degrade our communication skills is well taken.  They intrude.  They distract.  And what they give us, in the end are only fleeting electrons.  It’s not until we actually look into someone’s eyes and speak to them that we actually communicate.  The SET production reminds us why we turn off our phones at the beginning of the show.  It’s the only way we can avoid interruptions and be open to the messages we need to hear.

This show contains adult language, excessive alcohol use, and simulated violence.  Parents could take most teenagers to this show, but I would not advise taking kids12 and under.
There is ample parking in front of the theater, as well as on surrounding streets (no meters).

There are no restaurants in the immediate vicinity of the theater.  Since you have to make a drive if you’re going to eat before of after the show, I recommend the Gold Camp Brewing Company, at 1007 S. Tejon in Colorado Springs.  It’s about a 12 minute drive to/from the theater.  It’s a tap room, so beer only, but they usually have a food truck outside.  They also have menus for local restaurants that will deliver to the brewery.  Director/Producer and SET Company Member Sarah Shaver runs Gold Camp with her husband Dave.  Just so you know.  Tell her you saw the show if she’s behind the bar…

TICKETS HERE:  This show has closed.

The Other Woman:  Erin King