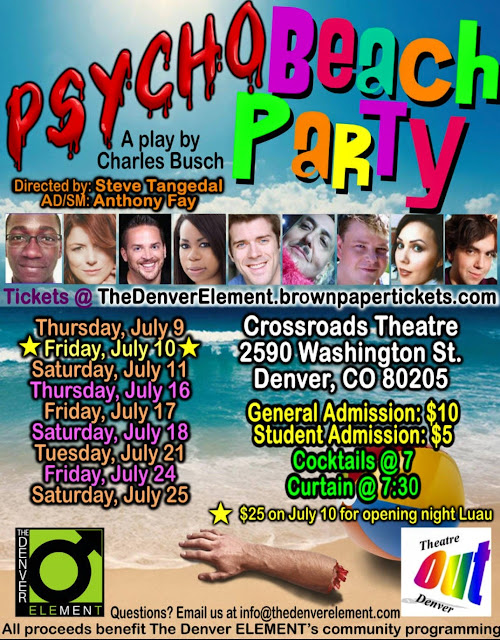 Produced by:  Theatre Out Denver and The Denver Element

If you’ve ever seen Charles Busch’s Psycho Beach Party (it was done recently in Colorado Springs at Theatreworks), you know how much fun a campy, vampy, draggy, gender bending show can be.  Busch is a successful actor, playwright, screenwriter, but especially, drag queen.  Psycho Beach Party is his parody of both the 1960’s bikini beach genre and 1950’s psychodramas.  Both genres are ripe for the picking, and Busch dunks them in huge vats of silliness from start to finish.

There is nothing as noble as reaching out to help worthy causes.  Tangedal’s current Psycho Beach Party is a fund raiser for Nathan’s future college expenses and for the Denver Element/Mile High Behavioral Healthcare.  If you want your entertainment dollar to go “farther,” this is your chance.  You’ll laugh, and you’ll get the satisfaction of doing some good for the community.  Bring your friends.  Fill the seats.  All of them.

It’s difficult to explain the plot of Psycho Beach Party, which is more of a delivery vehicle for zaniness than a coherent tale.  Chiklet, the shy, flat chested teenage girl looking for acceptance as a girl surfer (exquisitely executed here by Anthony Adu), has a multiple personality disorder.  Her “Ann Bowman” personality is a vampy, voracious woman, the exact opposite of her Chiklet personality.  The story careens from murders on Malibu Beach, to people waking up to find they have been shaved bald from head to foot, to kidnapping, to a mother with parenting issues, and to a B list movie star with an attitude.  Sprinkle in some paranoia, some delusions, and some pop psychology, and you have it all:  a truly “psycho” beach party.

Jennifer Bass takes Ms. Bordas role as Bettina Barnes in the current production, and she does herself and Bordas proud.  I saw Bass last year in Bug, which no one would mistake for a parody/comedy.  Bass clearly has the acting chops to do both comedy and heavy duty drama.

For Psycho Beach Party, Bass gets to dress up and act out as the Hollywood starlet with an attitude.  She also gets to wear some awesome costumes, right down to glitter encrusted platform high heel shoes.  The Crossroads Theatre is a small room; you will have a fine view of Ms. Bass’ shoe collection.  Do not miss it.  Platform shoes are made for strutting, and Bass struts around the stage, recruiting an entourage and making sure everyone knows how special she is.

Busch’s characters are a hoot; beach buddies Yoyo (Daniel Wheeler, no relation) and Provoloney (Anthony Fay) are surf slackers with a surprise.  They’re not just “roommates.”  Chiklet’s BFF Berdine (Krystal Jackson) has a teenage obsession with existentialists; she’s a fan of Sartre, Nietzsche, and Dosteyevski.  That would make her relatively rare among teenagers I have known.  Marvel Ann (Janessa O’Fallon) is Chiklet’s fake friend and a bikini beach babe
(and for that, I might add, she is very well cast).  Kanaka (J. Edward Nelson) is a surf legend, having once surfed the Big Wave while handcuffed.  Star Cat (Todd E. Moore) is a college drop out surf bum with killer looks and charm.  Mrs. Forrest (Hektor Munoz), Chiklet’s mother, has some dark secrets that made Chiklet the disturbed girl she has become.  Munoz is kitschy and cunning; Mrs. Forrest is every kids’ nightmare in drag.

Anthony Adu’s performance is flawless, and his physical features work well for playing a female.  Adu embodies Chiklet’s personalities with equal measures of glee and power; his Ann Bowman is fierce.  Playing multiple people in one body, and in drag, is a tall order for any actor.  We can’t help but feel for Adu’s Chiklet; she reminds us teenagers we have known, struggling to find their identity in an adult world.  Adu gives us a very naive and sympathetic Chiklet, and we can’t help but love her.  He seems right at home with his conflicted roles, making him the undisputed star of Psycho Beach Party.

Theatre Out’s Psycho Beach Party is a goofy, funny spoof with colorful characters in a raucous script.  Best of all, though, is that you can support an excellent cause when you buy a ticket.  That makes Psycho Beach Party a double winner; you get the satisfaction of doing a good deed while watching an entertaining production that you will not soon forget.

Psycho Beach Party is appropriate for older teens and up.  There is adult language and some adult situations.  There are a couple of cross dressing actors, and several openly gay characters.

Performances of Psycho Beach Party benefit The Denver Element, with the exception of the performances on July 24 and 25, which are dedicated to Nathan Boras’ college education fund.

If you can't make the show, I think this information is still current:

Contributions in the name of Nathan Bordas may be sent to 8611 Gold Peak Drive, Unit E, Highlands Ranch, CO, 80130. They will be put toward a college fund for Shelly's son.

For more information about Denver Element, see their webpage here.

Parking can be somewhat difficult.  (There is limited indoor parking available in the building.)  Meters on surrounding streets are free after 6:00 PM.

Look both ways before crossing the train tracks in front of the building.  Seriously.

There is a coffee shop (Coffee on the Point) next door if you are not sufficiently caffeinated.  I didn’t try it, but it looked and smelled great.  It’s open late (until 10:00 PM), so you can still get a cup after the show.

Not so much this time.  Jim n Nick’s serves Cheese Biscuits when you sit down, and they are simply the best cheese biscuit you’ll get anywhere.  In fact, it was a major factor in our decision about where to eat before the show.  This trip, though, the cheese biscuits were a huge disappointment.

When no biscuits arrived at our table, I asked the guy who brought Roxie’s salad from the kitchen about the biscuits.  He muttered something about a problem with their oven, but said he’d check.  He never returned.  I asked our waitress about the biscuits when she delivered our order.  Same story…some problem with the oven.  She offered to send the manager over, but I said I’d prefer she send biscuits.  She sent him anyway, to her credit.

The manager explained again that they had a problem with their oven.  I asked him when they became aware of the problem, and he said “today.”  He went on to explain that they had a very large catering order, and couldn’t cook enough biscuits for both the large order and the walk in customers.  Roxie pointed out that a table nearby was working on their second helping of biscuits.  I pointed out that somebody in management had failed to plan for both a large catering order and a full house on a Saturday night.  He mumbled something about the biscuits being a free item, but said he’d check the kitchen.

He came back with a small basket of biscuits and said he’d “keep them coming.”  Direct quote.  We never saw him again.  If you're wondering, no...there was no adjustment to the check, nor was there any offer of a complementary dessert or something to improve our experience.

Poor planning, indifferent attitude, and no interest in making it right.  We won’t be back, and I no longer recommend Jim n Nicks for anyone.