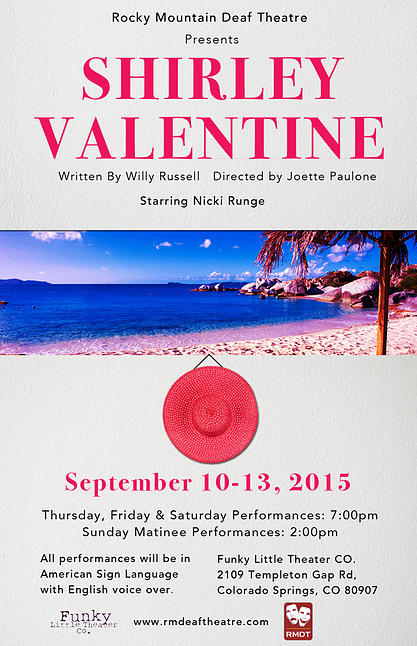 Shirley Valentine is a one woman show about a bored Brit whose life is stuck in a mediocre marriage.  Shirley cooks (eggs & chips) for her man (Joe), but there is no spark left in the relationship.  She has a shrinking circle of friends, and can hardly drag herself through another dreary day.

Just when things seem to be going from desperate to hopeless, one of her friends (Jane) wins a vacation for two to Greece.  Jane has long since kicked her husband out (she caught him in bed with the milkman), and has understandably developed many of the traits of a man hating feminist.  Lacking a travel companion, she offers to take Shirley with her to Greece.  Shirley accepts, and nothing is the same after that for Shirley Valentine.

The story has some excellent themes, not the least of which are self reliance and chasing your dreams.  Shirley’s dream quickly becomes a beach vacation to a Greek island.  Joe won’t go for it, so she has to keep him in the dark as long as possible.  It works.

Shirely is off to Greece, seeing the world through new eyes.  She disembarks from her flight, and almost immediately embarks on a voyage of self discovery.  I won’t say more, as I don’t want to spoil the story, but what follows is a classic story of a woman breaking out of her comfort zone.

Nicki Runge is Shirley Valentine.  She doesn’t play Shirley; she IS Shirley.  Runge embraces Shirley Valentine as somebody she knows like her own sister.  She pours out her heart onstage, from the despair in the first act to the elation in the second.  She literally becomes a new person before our eyes, and it is a beautiful thing to behold.  Runge blooms like a rose, going from desperate housewife to woman of the world.

The spare and simple set in the first act is symbolic of the emptiness in Shirley’s life.  In fact, her life is so empty that Shirley literally talks to the wall.  Not once.  Not twice, but as a routine.  The wall, of course, doesn’t answer; Shirley has to provide her own answers.  (Don't we all?)

The second act is set on the beach in Greece, and again the set design is simple but symbolic.  It’s sunny.  It’s sandy. And it’s a world away from the gloomy UK.  For Shirley, it’s a new world and a new beginning.

It’s no small feat to do a two hour, one person show.  That one person has to be able to carry it all on her shoulders.  Runge is a powerhouse, never letting up for a second.  She tells her story in episodic narration, bouncing between a ride on the "clitoris bus" to pondering what kind of life she wants to have.  This, and much more, she does all by herself.

I haven’t mentioned something important, however.  Nicki Runge is deaf.  She delivers all her lines in American Sign Language (ASL).  Before you panic, there is a hearing version that overlays Runge’s signs.  This show is open to all, hearing and hearing impaired alike.

While some may be hesitant about a performance in ASL, let me straighten that out right now.  Runge's signs, gestures, and facial expressions will enhance the experience, not detract from it.  Runge puts more emotion into her signs than some actors put into their words.

Kate Noonan is the voice interpreter, reading the script to accompany Runge’s signs.  Noonan is a marvelous reader, not just giving voice to the script but doing it in a proper British accent.  She isn’t visible to the audience, but she’s very audible.  Having Noonan’s reading is essential to those unfamiliar with ASL, but having Runge’s signs is a bonus for everyone in the room.  She adds the emotion where the words sometimes fail.

I deliberately left the ASL piece for the end of this review.  I don’t review deaf theater, or disability theater for that matter.  I review theater.  All of it.  Nicki Runge represents the Rocky Mountain Deaf Theater company (RMDT).  The operative word is not Deaf; it’s “Theater.”  Good theater tells us a story, perhaps teaches us something, and entertains us in the process.  And that is exactly what Shirley Valentine does.

Rocky Mountain Deaf Theater has taken Shirley Valentine on the road to Colorado Springs.  We’re the home of the Colorado School for the Deaf and Blind, and Colorado Springs is also home to a sizable deaf community.  We’re lucky to have the RMDT in town, if only briefly.  They will return in October with Silent Salzburg, a story of an Austrian family that goes into hiding in 1940 to protect their deaf teenage son from the Nazis.  You might want to think about getting your tickets early. 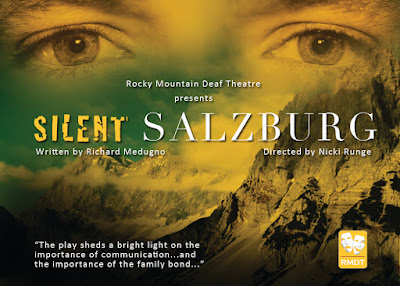 There is ample free parking in the strip mall parking lot at the theater.

Funky Little Theater serves the entire community.  Chris Medina and the Funky staff have provided ASL interpreters at other shows, including the recent production of Lysistrata.  So thanks, Funky...you're setting an example for the rest of the theater community.

Rocky Mountain Deaf Theatre Company (RMDT) appears on the Funky stage by special arrangement, and will be back in Colorado Springs in October with Silent Salzburg.

This show is suitable for adults.  There is adult language and adult situations.