Debbie Does Dallas, The Musical

I think it best to begin here with a description of what you will not see at Debbie Does Dallas The Musical (hereafter DDDM):

Although I have not seen the original 1978 adult film of the same name, the two productions share only a title and script elements.  If you were hoping that DDDM would be a pornographic recreation of the original, I have one piece of advice for you:  rent or download the film.  DDDM is not what you’re looking for.

The original film was a highly successful if controversial “adult” full length feature that generated a lot of sequels.  Ticket sales numbers are hard to come by (pun intended) for the adult industry, but Debbie Does Dallas is said to be in the top 5 highest grossing films of the genre.

1.  High school girl cheerleader (Debbie) gets accepted to join the squad of the Texas Cowgirl Cheerleaders, but she needs bus fare to Dallas.

2.  Debbie and her cheerleader girl friends get jobs to chip in for the bus fare.

3.  The girls learn that they can make a LOT of money quickly without doing much actual work.

And that’s it.  Seriously.

DDDM is NOT for everybody; it's strictly entertainment for adults.  It doesn’t pretend to be high brow, although there is a reference to Hester Prynne, for all you fans of 19th century American literature.  The music is catchy, the humor is naughty, and the plot is silly.  In other words, DDDM is all fun with no pretense.  The goal here is campy, raunchy adult entertainment.  Equinox Theatre Company hits that goal, and hits it hard (again…pun intended).  DDDM  delivers a guilty pleasure, but with minimum guilt and maximum pleasure.  Even your mother might enjoy it.

This script is, in its entirety, an adult situation.  Equinox Theatre Company welcomes adults, ages 18 and up, to Debbie Does Dallas The Musical.

There is ample parking at the theater in the surface lot at 37th and Navajo, as well as on surrounding streets (no parking meters).

I considered watching the original film as research for this post, but decided against it. DDDM stands on its own two feet, needing no support from its cinematic predecessor.  There is another benefit to that decision, as no husbands were harmed in the writing of this review. 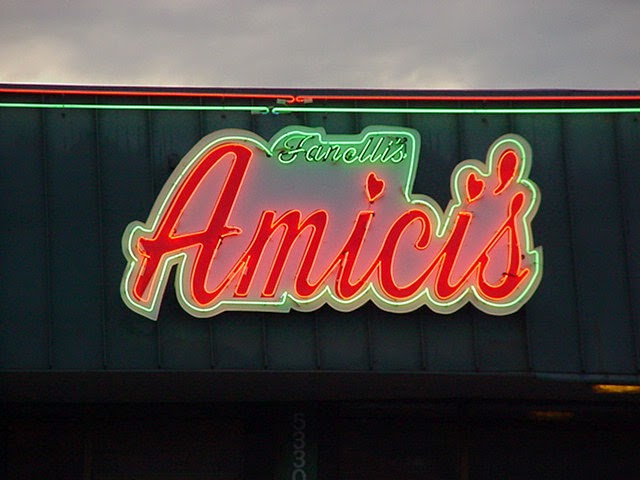 There are several Italian restaurants near the Bug Theater, but we decided to stop at one further west.  Amici’s Pizzeria and Italian Restaurant, 4300 Wadsworth Boulevard, Wheatridge, is a family owned favorite on the west side.  It’s about a 15 minute drive from The Bug in good weather and traffic.

The house salad is simple; chilled iceberg lettuce with shredded cheese and pepperoni.  Try it with the House Italian dressing.  Reasonably priced, with big portions, Amici’s is winner every time.