Who's Afraid of Virginia Woolf?

In a nutshell, here’s what you need to know about The Edge Theatre’s production of Who’s Afraid of Virginia Woolf?:
It’s that last part that will stay with you long after you leave the theater.  Much has been said about this production (here and here), in praise of the outstanding acting delivered flawlessly by the cast of four.  All of that praise is justified, including the headline The Acting is Scary Good in Who's Afraid of Virginia Woolf?.  In fact, it would be difficult to overstate the quality and intensity of these performances.

Edward Albee’s 1962 script jumps off the page at The Edge, as if the intervening fifty plus years never happened.  We are transported back to a simpler time of nuclear families, social conventions, and successful career paths.   Albee blows up all those 1960’s conventions, exposing them for what they are:  empty, meaningless facades that disguise the tortured human beings that still cling to them.  When the facade is destroyed, we see the desperate lives and secrets that are just below the surface.

The setting is George (Scott Bellot) and Martha’s (Emma Messenger) middle class home.  George is a history professor, and his wife Martha is the daughter of the President of the university. Martha has invited Nick (James O’Hagan-Murphy), a newly minted professor, and his wife Honey (Maggy Stacy) to stop by after a faculty party.  Nick can’t refuse the invitation; his goal of climbing the academic ladder would obviously benefit from socializing with the President’s daughter.

Thus begins a night of fun and games, heavy drinking, and emotional destruction.  Put the four of them in a room together, and you don’t just get fireworks.  You get heavy artillery, carpet bombing, and all out, no holds barred emotional warfare.

Emma Messenger is on a roll, coming off a Henry Award for her performance in ‘Night, Mother.    She holds court again here as Martha, dominating George with her physical presence and her emotional arsenal.

Make no mistake.  Emma Messenger does not hold back.  When she takes the stage, she literally TAKES the stage.  She leaves nothing on the table.
Messenger’s intensity as Martha is breath taking; we can hardly believe how much she can drink and how much cruelty she can dish out.  She is  capable of any and all manner of insult and sarcasm, gleefully exhibiting her contempt for George at every opportunity.  She taunts him.  She berates him.  She humiliates him, all while ordering him to refill her drink.  Messenger owns Martha, and Martha owns Nick.

Scott Bellot deftly plays a passive aggressive game as
George, preferring sabotage to confrontation.  He pours the drinks, making sure everyone but himself is totally intoxicated.  Bellot’s George can barely tolerate Martha, but neither can he leave her.  Bellot delivers wit and sarcasm when needed, whether to insult Martha or to remind Nick that’s he’s a naive poseur.  Bellot sparkles as he tells stories about their son, spinning the tales beautifully so that one cannot tell reality from fabrication.

James O’Hagan-Murphy is a sly Nick, working the social angles to enhance his career.  He tolerates the fun and games, but barely.  O’Hagan-Murphy is deliciously duplicitous as he goes from devoted husband to seducing Martha.  (Although to be fair, it’s not entirely clear who seduces whom here.)  Nick is a complicated character; O’Hagan-Murphy is a highly skilled actor who can bring Nick’s  layers to the surface.

Nick’s wife Honey is appropriately named; she’s the sweetest and most innocent of the four characters.  Honey drinks too much brandy, with predictable, if messy, results.  Maggy Stacy’s performance is brilliant.  It’s not easy to portray drunkenness well.  Stacy does it exactly right.  She’s not falling down drunk, but she can’t follow conversations, she slurs her words, and yet is having a seriously disconnected good time in a war zone.  Stacy has a gift of comedic timing, chiming into conversations with punch lines that actually punch.  In fact, Stacy doesn’t even need a line to get a laugh; her gestures are priceless.  She conveys her drunken stupor with squints, scowls, and a posture so relaxed it looks like she will slide out of her seat at any moment.

Director Rick Yaconis has assembled an all star cast for Albee’s classic, and he makes full use of the considerable talent they bring to The Edge stage.  Seriously.  This cast could probably read the Denver White Pages and make them sound interesting. Yaconis understands the characters and their complexity, and he has inspired his cast to bring those characters to life.

At more than three hours, Albee’s script tests both actors and the audience.  Yaconis, though, sets a brisk pace; no time is wasted with characters pausing for reflection.  These characters are brimming with intensity and need no time to reflect.  The three plus hours zip by quickly, which is a huge credit to Yaconis’ direction.

Christopher Waller’s set design is beautifully executed, giving the actors a detailed but functional stage for their war games.
Brynn Starr Coplan’s costumes are as exquisitely 1960’s vintage.  Nick and Honey are dressed in proper color coordinated suits.  Both Nick and George wear the fashionably skinny ties of the era, complete with tie bars.  Martha’s dresses (solid red for one, solid blue for the other) are strikingly simple but beautiful.  Paul Mitchell students did a fine job with Martha’s 1960’s hair style, and another fine job in Act 3 when they gave Martha a fabulous bed head look.  Rick Yaconis always pays attention to the smallest details, and for Who's Afraid of Virginia Woolf?, it totally pays off.  Everything looks exactly right on The Edge stage.

Albee’s script still rings true a half century later; our social conventions disguise rather than define our true character.  His characters are just as pithy, just as vituperative, and just as threatening as the characters you find every day in the comments section of any internet political post.  The Edge has put those toxic characters on full display for all to view.  It’s not a pretty sight, but it makes for amazing drama.

This is not a risky prediction, but Who’s Afraid of Virginia Woolf? is likely to end up on a lot of “Best of 2015” lists in December.  Including mine.

There is ample free parking at the theater and on surrounding streets.

By today’s standards, the drinking and smoking during Who’s Afraid of Virginia Woolf? may seem exaggerated.  As one who lived through and remembers the 1960’s, it is my considered opinion that both are an accurate representation of those vices.  Times have changed, for the better.

The concession stand is making a specialty drink called the Woolf’s Paw.  Jameson Irish Whiskey, ginger ale, and a dash of cranberry juice for color.  $6.00, and well worth it.  Roxie had a second one at the first intermission.  She slept well on the way home after the show. 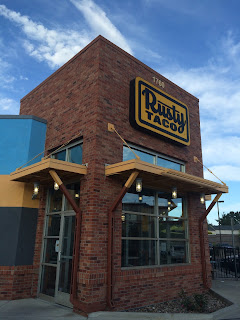 We didn’t have much time due to traffic, so we stopped at Rusty Taco, 1760 South Havana Street, Aurora.  It’s tacos are fast food, but far different from your typical Taco Bell experience.  (Full disclosure:  the only thing I order at Taco Bell is a diet Pepsi.)  These are street tacos.  They’re small, on a soft tortilla, with a variety of fillings.  I had the #9, Achiote pork with pineapple, onion and cilantro.  One thing I really like about Rusty Taco:  you can ask for “no onions” and they smile and say “sure!.”

We had a couple of tacos, chips & quest, 2 soft drinks, and 2 orders of sopapillas, all for about $15.00.  We were in and out in less than 30 minutes, and back on the road to The Edge.  They have a good selection of both draft and bottled beers, but due to my driving requirements, I had a soda.  After seeing all the booze onstage at The Edge, I wish I had ordered a Dos Equis with my Rusty but tasty Taco.