Company:  The Theatre Company of Lafayette

I’m old enough to remember when TV shows came in just two colors:  black and white.  Well, that’s not entirely true.  Those shows included every shade of gray found in the black to white spectrum.  Still, we just call that black and white. (See notes below for a soapbox statement on “black and white.”)

For me, as for many of my generation, the best of those black and white shows was The Twilight Zone.  It was a weekly escape from reality.  You entered another dimension for 30 minutes.  I can still see (and hear) writer Rod Serling speak these words while creepy music played in the background:

"There is a fifth dimension beyond that which is known to man.

It is a dimension as vast as space and as timeless as infinity.

It is the middle ground between light and shadow, between science and superstition, and it lies between the pit of man's fears and the summit of his knowledge.

This is the dimension of imagination.

It is an area which we call the Twilight Zone."  Show opening, Season 1.

And thus began our weekly excursion into fantasy, horror, and suspense.  Most of the episodes were written by Rod Serling, who also hosted the program.  Not only was he a gifted writer, but he had a dramatic way of narrating his work.  He opened the show, and he closed the show, making sure that from start to finish you always knew you were in The Twilight Zone.

Theatre Company of Lafayette (TCL) is now doing its 10th revival of the classic TV show, recreating 3 episodes (Walking Distance, Rip Van Winkle Caper, and The Lateness of the Hour) and sprinkling in some ancient commercials for fun.  Of course, there are appearances of the man, Rod Serling (Ian Gerber) to crank up the mood meter.  The Twilight Zone is one of the most popular shows on the TCL stage, selling out nearly every seat for the last nine revivals.  The Twilight Zone number 10 is continuing that trend.

Mr. Gerber has an uncanny physical resemblance to Rod Serling, and he can faithfully mimic Serling’s speech style.  It’s actually kind of bizarre to watch him.  He’s so close to the real Rod Serling that I started having flashbacks to the flickering black and white TV in my childhood living room.  I could see the screen, the channel dial, the big wood cabinet, and volume knob.  Gerber is exactly how I remembered Serling, and TCL took me back to the unmissable weekly viewing when The Twilight Zone lit up that small room.  So to you, Mr. Gerber, and to TCL, I say…thanks for the memories.

Each of the three episodes for this 10th revival is uniquely Serling at his best.  By that I mean that I can’t give you much information about the plot without spoiling the show.  Here’s the best, if brief, description I can give:

Martin Sloan is a 36 year old advertising executive who, while driving in the countryside, stops at a gas station within “walking distance” of his boyhood home.  It appears exactly as he remembers it.  It seems unchanged by the passage of time.

The perfect crime.  Steal a million dollars worth of gold and disappear.  But how, you ask?  It’s not that difficult if you’re willing to spend some time in a suspended animation chamber.

The Lateness of the Hour

If you could staff your home with robots for all your daily chores, would that be utopian or dystopian?  The answer depends on your point of view, and how sure you are of your own past.

As you watch these three short stories unravel on the TCL stage, you will cross over into The Twilight Zone.  You will travel back in time, to when TV was monochrome, programming was on the network’s schedule, and things were much simpler.  When you walk into the Mary Miller theater, you will discover that you just crossed over into the TCL Zone, a place where time travel (backwards, at least) is possible.

There are a lot of things to love in The Twilight Zone, too many, frankly, to bring up in this post.  Here are a few though:

Howard Smith’s set design.  Between the four suspended animation chambers (The Rip Van Winkle Caper), the soda shop (Walking Distance), and the upscale home of Dr. & Mrs. Loren (The Lateness of the Hour), Mr. Smith has delivered impressive, creative, and functional sets for a wide variety of situations.

Renee Malis as Jana (The Lateness of the Hour).  Ms. Malis is striking as the rebellious daughter who confronts her parents, only to discover that she is part of the problem, not the solution.  Malis takes her emotions through a roller coaster ride that few of us could endure.

Byron Thompson, Don Thumim, Matthew Barham, collectively known as the “hunks.”  Thompson, Thumim, and Barham make the Noxema commercial the comedy highlight of the entire performance.  Not to be missed.

Don Thumim.  Yes.  He’s a hunk.  But I’m not sure I want to have a beer with him at an Italian restaurant.  Alka Seltzer commercial.

Judy Carlson.  She’s the Fig.  In a fig costume.  What more can you ask of an actor?

Aidan Stockrider.  The youngest guy on the stage, but a BIG stage presence.  He hit his marks, knew his lines, and charmed the audience.

Kirsten Jorgensen Smith.  Ms. Smith directed The Rip Van Winkle Caper, and adapted it from the original.  She replaced the male scientist with female actor (Sage Miller).  It worked.  It also put a different spin on the story, as the mastermind criminal was a woman with a staff of 3 male bad guys.

Vonalda Utterback.  Ms. Utterback directed The Lateness of the Hour, which has the special challenge of actors portraying robots.  Utterback coached the cast to drop their humanity and to act mechanical.  It worked.  Well.

I could go on (apologies to all who I didn't mention), but I think I’ve made the point.  The Twilight Zone is great entertainment, due in no small part to the genius of the source material.  But having inspired source material isn’t enough.  That source material has to be executed with the respect and the quality it deserves.  TCL has done exactly that, making The Twilight Zone a worthy (and very worthwhile) tribute to Rod Serling and his work.

The Twilight Zone is appropriate for all audiences.  There is no parking lot at the Mary Miller Theater, but there is ample free parking in the neighborhood.

I mentioned above that “black and white” TV actually includes a broad spectrum of greys (or grays, if you prefer).  I mentioned this because for those of us who remember those days, and those shows, we know that without the gray areas the shows would have been virtually unwatchable.  There is always a a broad range of gray between black and white.

My point is political, so if you’re not interested, read no further.  For all the benefits of Color TV (and they are many), and HD TV, and cable/satellite/streaming TV, we seem to have lost sight of the “gray areas.”  That range between the extremes of black and white.  It impairs us; we are only able to see, and speak, in absolute terms.  Right and wrong.  Left and right.  Red and blue.  Good and evil.

So consider this my quaint flashback to a simpler time when we HAD to see the “gray area.”  It fills in the critical details.  It gives the scene texture.  It provides nuance.  Perhaps we could benefit from remembering that red contains some rose, and that blue contains some cyan.  There are many parts to the spectrum between the extremes.

Lighting Designer Brian Miller always does a fine job with the lights, but for this performance he went above and beyond.  There was a light that didn't function properly early in the performance.  Brian gamely showed up at intermission on a Sunday afternoon and fixed the problem before Act 2 began.  Now that's a lighting guy who brightens up everyone's day.

The Twilight Zone was nearly sold out at the performance I saw.  As tickets are only $10 on Thursdays, they are hard to get.  Thursday, November 12 appears to still have seats available.  Link above for ticketing...but don't wait too long.

PHOTO CREDITS:  The Theatre Company of Lafayette and Brian Miller.

We met friends for brunch at Pinocchio’s Italian Eatery at 211 N. Public Road in Lafayette.   They serve breakfast on weekends, 9:00 AM to noon on Saturday and 9:00 AM-1:00 PM on Sunday.  It’s a fairly standard breakfast menu, well prepared and served promptly and with a smile.

Ironically, we had planned to do brunch at The Post Brewing Company, which is nearby.  Unfortunately, it’s a very popular spot, and we couldn’t get a reservation.  My advice:  if you’re unwilling or unable to wait your turn at The Post, try Pinochhio’s.  You’ll be glad you did.  With good food at reasonable prices, no waiting, and an environment quiet enough for conversation, we’re glad The Post was booked.  We had a leisurely breakfast and great conversation with friends at Pinocchio’s. 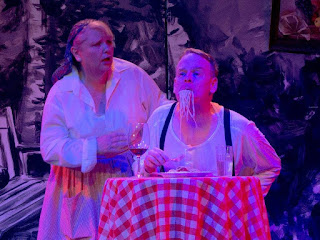 If you’re looking for good spaghetti with spicy meatballs, Mr. Thumim…well, you know where to go...Pinocchio's!  All you can eat spaghetti every Thursday for just $8.99.

Directed and adapted by: Ian Gerber

Noxema Commercial (Take it Off)

Reimagined by: Madge Montgomery, Ammon Swofford and the company.

The Lateness of the Hour