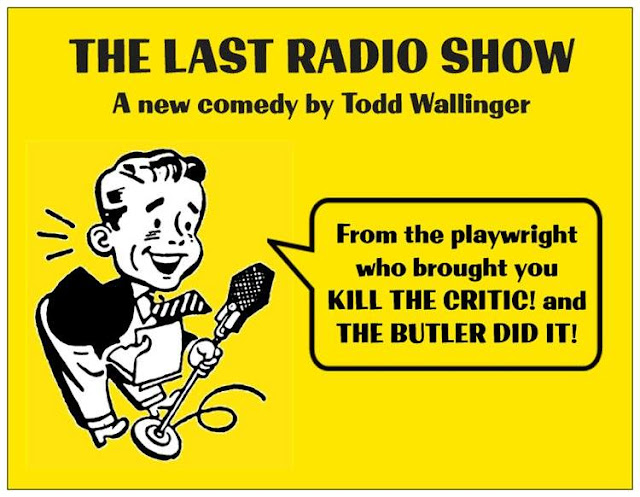 Radio drama is a somewhat lost art, having had its peak in the 1930’s and 1940’s.  While there is still some “radio theater” being done (notably, Focus on the Family is one such source here in Colorado Springs), it has mostly disappeared from the airwaves.  To the extent that radio drama lives today, it is mostly found in podcasts rather than broadcasts.

Colorado Springs playwright Todd Wallinger brings radio drama back to life on the Black Box stage with The Last Radio Show.  Set in 1946, it’s based on a bad day at KUKU radio (yes…”cuckoo” radio) as the staff tries to stave off going dark for not paying the electric bill.  Jimmy (Sam Suksiri), the station’s office boy/coffee maker, has aspirations to join the cast of radio actors.

The radio actors include some actual "characters," most of whom would rather be pampered than prodded.  Wilson (Freddy McDaniel), the station manager, has his hands full wrangling the “talent” just to get them to take the stage.

I don't think I give away too much of the plot by telling you that the radio cast (Richard Buchanan as Nigel, Dan Robbins as Danny, Karen Goettsch as Gloria, and Jessamine Hamer as Roxie) takes turns bailing out, and the replacements are a work in progress.  It looks inevitable; the electric company will soon shutter KUKU.

Whether KUKU can be salvaged is unclear until nearly the final scene.  Sam Suksiri’s office boy/coffee maker character provides the power and light that the electric company only wishes it could bottle and sell.

The show starts slowly, but finishes with a flourish.  Suksiri’s late but inspiring performance as an actual radio drama actor brought spontaneous applause from the opening night crowd.  Suksiri takes the “radio drama” format to a whole new level in a furiously paced finale for KUKU.  It’s the bright spot for The Last Radio Show, but it leaves one wondering why it took so long to crank up the fun promised by the premise.

The laughs in Act 1 and parts of Act 2 were genuine but sporadic.  I think this was partly due to so much of the early dialog being focused on setting up the plot rather than on getting laughs.  For example, we get numerous references to Rita (Emily Stroble), the “receptionist,” long before she appears on stage.  Rita is critical to the plot, but not to the fun.  Stroble does a fine job with her character, but that character is more dramatic than comedic.  Mrs. Watt-Ryler (Sue Bachman) is full of comedic possibilities (Wilson refers to her as “Mrs. Rottweiler”), but she has very limited time on stage.  Alaina Stroble (Maggie) is an appealing love interest, but she gets few scenes with Jimmy to crank up the chemistry.

This capable cast has other standouts in addition to Suksiri.  Freddy McDaniel (Wilson) brings a radio voice and a radio DJ background to his role, and it shows.  He can bark at the radio cast before the “ON AIR” sign lights up, and a split second later welcome all those in “radio land” with his soothing radio voice.  Karann Goettsch (Gloria) can be both a radio drama diva and vulnerable victim of dead flowers.  Dan Kifer (Knuckles) is convincingly brutish until he’s offered a role on the radio stage.  Sue Bachman (Mrs. Watt-Ryler) makes the most of her role, giving Mrs. Watt-Ryler a distinct and tangible personality.

The Last Radio Show opens and closes with Jimmy doing his best radio drama work.  Those are the two best scenes in the show.  Between those two scenes, Jimmy gets lost in the crowd.  He’s the guy we’re rooting for, and he’s the guy whose dreams come true in the end.  He gets the audience engaged and laughing out loud.  If there’s a tweak to the script down the road, hopefully it will sprinkle more of Jimmy into the middle of the show.
NOTES:

There is ample free street parking the Black Box Theater.  Concessions are available and can be consumed in the theater. 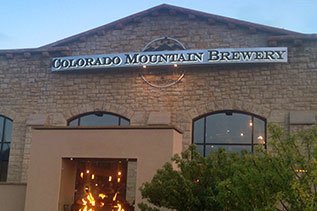 It’s just down the street (21st Street, that is), about a 3 minute drive to or from the Black Box Theatre.  It’s an historic location; it was formerly a railroad roundhouse, and for many years, the location of the Van Briggle Pottery studio.

Colorado Mountain Brewery & Restaurant has the craft brews and the food that keep us coming back.

If you haven’t tried the Brewery Pretzels appetizer, do it the next time you’re at CMB.  You’ll get two large baked pretzels, one of which will be stuffed with melted jalapeno cheese.  It’s the main reason we go back there whenever we can.

Roxie (the spouse, not the character) had one of the seasonal beers:  Winter Stout.  It’s very dark, very rich, and made with chocolate and marshmallow flavors.  Not my style, but she loved it.