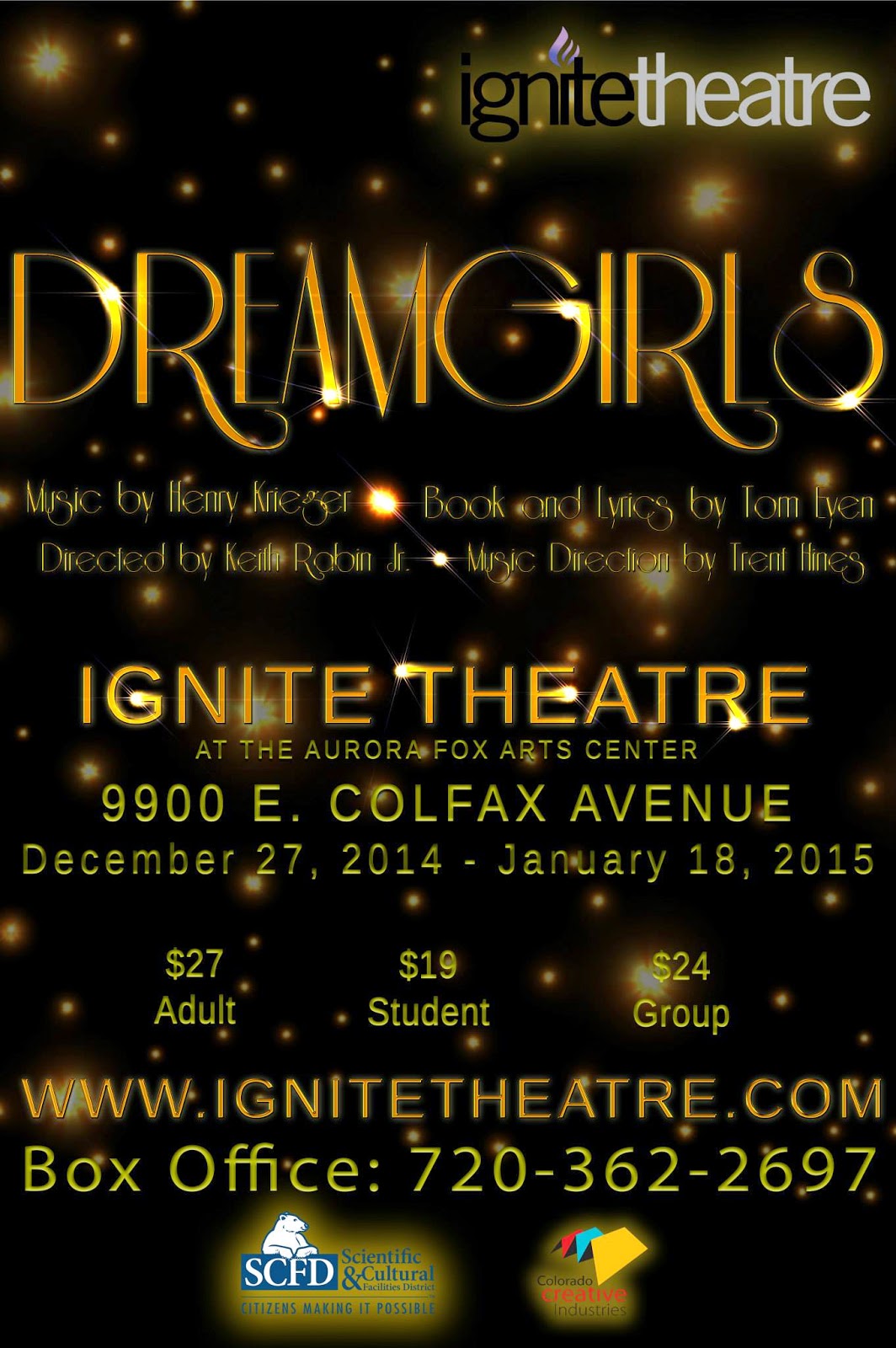 For the fans of the 2006 movie with Beyonce´ Jennifer Hudson, Jamie Foxx, and Eddie Murphy, Dreamgirls the musical is a no brainer.  From the chattering audience comments that I overheard, those movie fans were in abundance at the Aurora Fox for this Ignite Theatre Company production.

For those of us who saw neither the film (I didn’t) nor the musical, it’s a high energy, rocking, R & B Motown motivated story of the three (or four) Dreamettes vocal group.  It’s no secret that the story is loosely based on the backstory of the Supremes, and it’s not exactly a ringing endorsement of that backstory.  The plot involves scheming, payola, and massive ego conflicts among the various characters.

Ignite’s production is a feast for the eyes and the ears.  There is a treasure trove of talent on the Aurora Fox stage.  The original three Dreamettes (Effie White, played by Anna High, Lorelle Robinson, played by Shandra Duncan, and Deena Jones, played by Shanna L. Woods) are a talented group but whiplashed between the sound want and the sound they need to have in order to be successful.  To appeal to pop music fans (read as:  “white people”), they need a makeover according to their manager Curtis (played by Christopher Tye).  That means that Effie is out, and Michelle (played by Erica Lyn Cain) is in.

The plot is based on some of the Supremes actual history; just as Florence Ballard was replaced in the Supremes for being difficult, so Effie was replaced in the Dreamettes for tardiness and an overall bad attitude.  Other parallels include offstage love affairs and (here’s a major ego item) requiring the press to call Diana Ross “Miss Ross.”  The press in the musical version is required to call Deena Jones “Miss Jones.”

The undisputed star of Dreamgirls is Anna High as Effie.  Her voice is remarkable, but there are two standout numbers; And I ‘m Telling You I’m Not Going, from her first act dismissal from the Dreams, and the second act, show stopping number I Am Changing.

High is a very accomplished singer, and she wallops both tunes out of the park.  It is the second of the two, though, that was stunningly beautiful.  She is singing to pitch a comeback, and it is quite a pitch.  Her life has been a roller coaster ride, and she is ready to get back on the ride. I Am Changing would convince the most skeptical cynic that she’s ready for the big time. It’s a beautiful and powerful moment in the story, and Anna High takes us with her on that roller coaster ride.

High’s performance is spectacular, but that in no manner diminishes the other stars in this galaxy.  Shandra Duncan, Shanna L. Woods, and Erica Lyn Cain are all marvelous as Dreamgirls.  They bring back the Supremes’ harmony and energy we all remember.  That said, though, it is probably their acting that makes this show work.  They are credible characters, thrust into the make believe world of Motown divas, and they play their roles to the hilt.

Justin Spann plays Jimmy, a hard working but marginally successful R & B singer.  Spann
has the moves, the grooves, and the vocals to bring down the house.  He gets to be the center of attention when he starts stripping onstage, to hoots and howls from the ladies in the room.  He gets to play to a white audience in Miami, with some adjustments to his act.  Spann is clearly having fun with all the shenanigans, and the audience loves him from his first note.

Curtis Taylor Jr.(as Christopher Tye) and Pierre Andre′ McNair (as Marty) add a layer of management (and a layer of conflict) to the music.  Both are very capable actors.  Randy Chalmers (as C.C. White) gets it right as Effie’s brother and songwriter.  For reasons that aren’t convincing to me, ensemble members don’t usually get much notice.  I’m breaking with that tradition here, as the ensemble is terrific.  They are listed below with the rest of the cast.

Ignite gets it nearly perfect here (there is an ill fitting costume for Curtis).  The sound, the lights, the orchestra, and the cast all combine for a first class performance that had the audience buzzing after the lights came up.  Director Keith Rabin Jr. has taken on a huge task and pulled it off with amazing dexterity.  Dreamgirls is a diva driven music lovers and theater lovers dream.
NOTES:

This show is acceptable for all ages.  Artificial smoke is used; persons with allergies might want to request a seat away from the stage.  There is ample parking behind the theater and on the neighboring streets.

Ignite Theatre Company recommends Hamburger Mary’s at 700 East 17th Avenue Parkway in Denver. I agree; there may be no better burger in Denver.  A mere 17 minutes from the theater, and a better, gayer, or more fun dining experience would be hard to find.  “Eat, Drink, and Be Mary.”  And don’t worry.  It’s very friendly to families and heterosexuals.