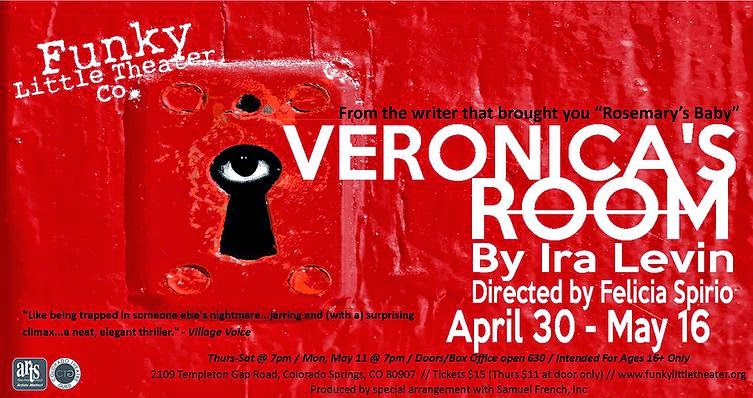 Playwright and novelist Ira Levin has some pretty impressive credentials.  His fiction works include Rosemary’s Baby, The Stepford Wives, and The Boys from Brazil.  In addition to Veronica’s Room, his plays include No Time for Sergeants (adapted from the novel by Mac Hyman) and Deathtrap.  Levin knew a lot about storytelling; Rosemary’s Baby, made into a film in 1968, is still a classic of the horror genre.

Veronica’s Room has some similarities to Rosemary’s Baby; it keeps audiences on the edges of their seats as the creepy characters unveil a truly bizarre story.  In other words, it’s a great script for a company like Funky Little Theater.  All the action occurs, of course, in Veronica’s room, which helps on a small stage.  The intimacy of the Funky space brings the audience right into Veronica’s room, which Funky has carefully created in full detail.  The room is pink, for a girl.  It has a large stuffed animal on the bed.  Veronica’s pins are in the dresser.  Her clothes are in the closet.  Her jigsaw puzzle is on the table.  Everything is preserved just as it was when Veronica died.

As the play opens, a young man (Chris Medina) and a girl (Martha Lamb) are standing in Veronica’s room, as a Woman (Barbara Summerville) and a Man (Steve Wallace) explain to them that Sissy (offstage) is dying but would love to meet the girl.  She (The Girl, Susan) bears a striking resemblance to Veronica.  Sissy would love to meet Susan/Veronica before she dies.  From that setup, Veronica’s Room descends into some twists, turns, and surprises that make for an entertaining evening of theater.

Martha Lamb puts in a credible performance as Susan/Girl, mixing some youthful naïveté in the first act with outright horror in the second act. The structure of the play requires that someone in the cast is not who he or she seems to be. The key to Lamb’s role is that, in the second act, she must convince us that she could be the one who is not who she claims to be.  Lamb did exactly that.

Chris Medina (Young Man) plays two roles here.  In the first act, he is Larry, Susan’s date.  In the second act, he is Veronica’s treating physician, Dr. Simpson.  The difference between the two characters is striking; Medina plays them as polar opposites.  Larry is shy, aloof, and soft spoken.  Dr. Simpson is cool, confident, and professional when he’s not an accessory to a crime.  Medina nails both parts, but seems especially comfortable in the role of doctor and caretaker.

Barbara Summerville (Woman) also has two roles.  Her first act role is done in a marvelous Irish brogue.  She’s charming as the older lady luring Susan into a trap.  In the second act, she is decidedly more hostile, in fact, she is downright scary.  Summerville has both roles mastered, but she absolutely shines as the evil, demented woman in the second act.

Steve Wallace (Man) also does the first act in an Irish brogue, and he’s a charming fatherly gentleman until the second act.  His second act character is less evil than the Woman, but he’s still a scary guy.  Wallace is most effective when he pleads with the Woman to end their crime spree; he is a culpable voice of reason.  He makes a sincere effort to change things, but Wallace conveys with his body language that he knows nothing is going to change.

Director Felicia Spirio makes the most of her resources here, guiding the cast through the multiple personalities and plot twists that make Veronica’s Room a challenging script.  Spirio’s touch is delicate but disturbing as The Girl/Susan realizes the how much danger she faces.

I saw Veronica’s Room on opening night.  The dialog early in the first act was somewhat stilted at points, but by 10 minutes into the show, the actors seemed comfortable with the live audience.  In what seems an unfortunate oversight, the program does not credit the set designer.  That’s a shame; it was functional, detailed, and quite well done.  Ironically, the title of the play itself would suggest that the set design is of considerable importance.  Someone should get the credit.  (UPDATE:  The Director's Notes in the program credit Chris Medina for the set design.)

Veronica’s Room is an entertaining but disturbing script.  Funky Little Theater’s production is  spot on and well worth the price of admission.  If you’re a fan of intriguing story telling with plot twists and surprises, get a ticket to Veronica’s Room.  You’ll be glad you did; live theater done well in a small space like The Funky Little Theater is a very special experience.

This show, in my view is appropriate for ages 12 and up.  Discretion is advised, however, as there is some violence that may disturb young children.

There is ample free parking in the strip mall parking lot at the theater and on the surrounding streets. 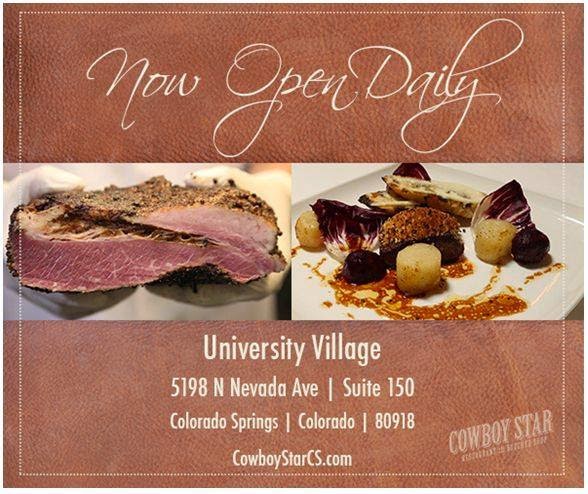 The University Village Shopping Center is about a 10 minute drive to or from the theater and offers a variety of restaurant choices.  We were pressed for time, so we chose Tokyo Joe’s for quick service and healthy food.  If we had more time, however, we might have tried the new Cowboy Star Restaurant and Butcher Shop.  Maybe next time…