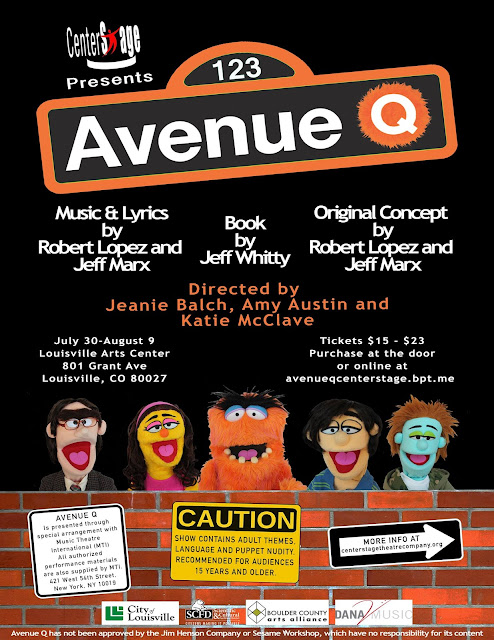 It is no small challenge to do a Broadway musical in a small venue such as the Louisville Arts Center (capacity estimated at 60-70 seats).  Putting a fairly large cast (11 actors), a keyboard musician (Dan Graeber), and a light/sound board operator on the stage leaves precious little real estate for set pieces.  Not all companies would put such a big show on such a small stage, fewer still could pull it off as well as CenterStage Theatre has done in Louisville.

Avenue Q is a naughty puppet show; leave the kids at home.  For the adults, Avenue Q is a fun, engaging, and altogether entertaining show.  The story involves self discovery and coming of age as Princeton (Seth Reder) learns that his recently minted Bachelor of Arts degree in English is useless in the job market.  He is not alone in his quandry; he’s a good fit for the citizens of Avenue Q, including a Muppet with a porn problem (Trekkie, played by Jack Richard), Gary Coleman (Ellie Oliver), former celebrity child actor, Christmas Eve (played by the ironically named "Eve" Olson) and Kate Monster (Chanel Karimkhani).

It’s not The Sound of Music.  Avenue Q  does not pretend to be wholesome family entertainment.  The song Everyone’s a Little Bit Racist is exactly what the title suggests.  If You Were Gay (“it would be OK”) embraces acceptance.  The show won three Tony Awards in 2003, including Best Musical, demonstrating that puppet shows are not just kids’ stuff.

Avenue Q opened Thursday night at the Louisville Arts Center to a packed house; the crew had to bring in extra folding chairs to seat everyone.  About 10 seconds into the show, it was obvious to all that this was going to be a special event.  The company broke out the Avenue Q Theme song with commanding harmonies, grabbing the audience by the lapels and not letting go for the next two and a half hours.

Any musical requires strong lead actors with excellent voices, but it also helps if they have some personal chemistry to make the story work.  Co-Directors Jeanie Balch and Amy Austin must have thought they were dreaming when they heard Seth Reder (Princeton) and Chanel Karimkhani (Kate Monster) audition.  Both have marvelous singing voices, as well as the acting chops to bring puppets to life.  Reder and Karimkhani pull out all the stops here, making their puppets sing, dance, and act as if they are actually people.  If that’s not enough, though, Reder and Karimkhani make a credible, lovable couple that powers the story forward at every turn.
Avenue Q

Princeton and Kate Monster are not the only love story in Avenue Q; Rod (Bryan Anderson) and Nicky (William Thames) are celibate “roommates” whose self discovery reveals their mutual attraction.  It’s a much rockier road for the guys than for Princeton and Kate.  Rod kicks Nicky out of the house for calling him gay.  Bryan Anderson has a great song when he denies Nicky’s accusation.  He sings My Girlfriend Who Lives in Canada, explaining he’s straight and in love with “Alberta.”  It’s a hilarious moment, and Anderson plays it with every ounce of sincerity he can muster.

There’s a LOT of great music in Avenue Q, but there were two standout numbers in the CenterStage production.  Act 1 closes with the ballad There’s a Fine, Fine Line, sung by Kate Monster.  Karimkhani breaks out her best for Fine Line.  Anyone who has ever had a broken heart will see him or herself in Karimkhani’s rendition.  Her performance is a show stopper, and not just because it closes the first act.

The second standout song is I Wish I Could Go Back to College, featuring Reder, Karimkhani, and Thames.  The directors have them separated into a triangle; Reder and Thames are down stage; Karimkhani is upstage and looking down from the top of the set.  The physical distance between the three belies the close, tight harmonies they bring to the music.  It is a dramatic moment in the story as the three characters long to return to their collegiate comfort zone.  It is also a magic moment, hearing these three talented actors pouring out the emotions we have all experienced.

In a bit of a casting coup, CenterStage put a white woman (Ellie Oliver) into the role of Gary Coleman, an African-American male child celebrity.  Oliver doesn’t have to be black or male.  She brings the Gary Coleman sass to her role in all her lines, but especially in a tag line:  “what you talkin about Willis?”  Oliver’s facial expressions are priceless.  She doesn’t need to deliver a line to get a laugh.

Adam Kinney is Christmas Eve’s boyfriend/husband Brian, which in itself is a tall order onstage.  Kinney brings his gorgeous voice and winning smile to the role, and gets a big laugh with his wedding costume:  tuxedo with tails, shorts, and sneakers.  Lindsey Jones adds the sexy swagger as Lucy, who hasn’t met a guy she can’t seduce. She turns her charms on Princeton, and he’s a goner from the get go.

If you’ve seen Avenue Q before, you know about the Bad Idea Bears.  If you’ve ever made bad decisions, you may recognize them as being partly responsible for that emotional or physical hangover you still get when you remember the consequences.  Natalie Rudd and Alei Russo are the most mischievous, most naughty, and the funniest Bad Idea Bears you will find anywhere.  The best line in the show is one for the Bad Ideas Bears.  “She’s wasted.”  Don’t miss it.

One of the challenges with putting Avenue Q onstage in such a small venue is that the audience is so close to the action that they focus mostly on the actors.  That’s natural, but the puppets are the proper focus.  Acting and puppeteering are separate skills, and at times, the puppets seemed more like props than people.  If there’s any way to improve Avenue Q at CenterStage, it would be to raise the profile of the puppets somehow.

I was probably a little skeptical that Avenue Q would work at the Louisville Arts Center.  I’m happy to report that I was completely wrong.  It doesn’t just work.  It soars.
It delivers flawlessly as entertainment, and it also delivers the important messages of Avenue Q.

Sometimes you go to shows and get less than you expected.  Most of the time you get exactly what you expect.  Every once in a while you will be surprised by excellence that exceeds your wildest expectations.  CenterStage's Avenue Q is in this last category.

Adjust your expectations for CenterStage’s Avenue Q.  Adjust them UP, but be prepared.  CenterStage will still exceed your expectations.  It’s a perfect summer musical, with all the witty music, compelling characters, laughs, and the life advice we want from theater.  All you really need to know about Avenue Q is that it opened to a full house and got an extended standing ovation when it was over.  You don’t have to take my word for it; you can trust the audience.  They were thrilled, chilled, entertained and enlightened.

You will be too if you can get a ticket.

There is ample free parking on the surrounding streets.

Dress comfortably.  The theater is not air conditioned.  Silent ceiling fans will run during the performance, but when you put 60-70 people in a small room in the summer, things heat up.  If you’re uncomfortable, remember that you’re not an actor, so you don’t have a dozen hot lights shining on you.  If you are in the cast, Avenue Q could be a weight management experience for you.

This show is not for children under 15 years old.  Despite appearances, Avenue Q is not related in any way to Jim Henson or the Muppets. 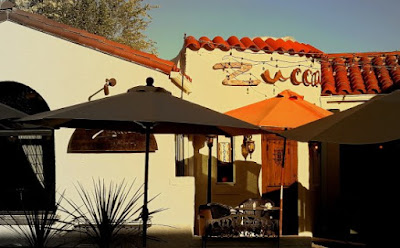 We made it to Zucca Italian Ristorante, 808 Main Street, during happy hour (4:00-6:00 PM).  What a pleasant surprise:  $3.00 bottled Moretti beers and $7.00 personal pizzas.  Service was excellent, food was delicious, and the price was super.

If you're a locavore, Zucca is your place.  They own Three Leaf Farm, and grown their own ingredients, including vegetables, herbs, and fruits.  Farm to table in a single stroke.  It makes a difference you can taste.

Zucca is less than 5 minutes to the Louisville Arts Center.  There are numerous restaurant choices on Main Street in Louisville, although one of our favorites seems to have moved out.  The Rex, 817 Main Street, is gone, replaced by Madera Grill.  The new venue appears to be a fairly expensive fine dining establishment.  We will miss The Rex.


Keyboards:  Dan Graeber
Posted by Bill Wheeler at 11:24 AM