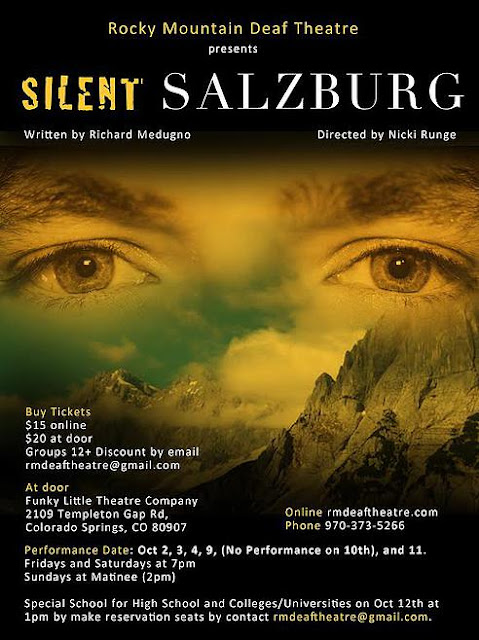 Mass sterilization of deaf people began in 1933, as soon as Nazis came into power; approximately 17,000 were forcibly sterilized.  More than 70,000 disabled or otherwise “incurably sick” individuals were treated with a “mercy death” in the Action T4 program, part of the Nazi euthanasia effort to purify the Germanic race.

Silent Salzburg, while not a true story, is a historically accurate one.  In Nazi Germany, deaf people, and other disabled individuals, were sterilized or exterminated.  Playwright Richard Medugno sets his story in a small Austrian town in the spring of 1940, and in the Klottmeier home.  Stephana (Janette O’Brien) and Gerhardt (Shawn Harmer) have a daughter Lisa (Kate Noonan Rickers) and a son Hans (Albert Tharpe III).  Hans is a deaf teen, and the Nazis are looking for him.

It’s a chaotic development.  Hans has just met and fallen in love with a girl (Marlena, played by Liesel Viser).  Gerhardt has a business, and is reluctant to flee the Nazis.  Stephana is terrified; she can’t abide the thought of Hans never being able to have his own children.

Despite Gerhardt’s foot dragging, Stephana convinces him to take up her plan:  flee to Salzburg and stay with her brother Otto until they can contact cousins in Switzerland and move there.  That, in a nutshell, is the story arc for Silent Salzburg, and it is a compelling drama from the outset.

Director Nicki Runge has provided the audience with ample interpretation.  “Shadow Interpreters” follow the speaking actors onstage, translating their words into signs.  Albert Tharpe III, as Hans, has no lines.  He only signs.  His thoughts are voiced mostly by his stage sister, by Kate Noonan Rickers, who is bilingual in spoken English and American Sign Language (ASL).  Noonan’s interpretation is completely consistent with the script, as Hans’ parents do not know ASL.  She interprets for them, and for the audience.  For those who wondered how a deaf theater experience is possible, fear not.  It’s not just possible.  It’s enhanced by the nuances of both spoken English and ASL.

The story continues at uncle Otto’s place in Salzburg, and as one might expect, there are some bleak developments as the Klottmeiers try to wait out the Nazis.  It gets very dramatic, and there are some tears shed in the audience as the story unfolds.

Think about that.  Everyone in the audience, whether hearing or deaf, needs help to understand the script.  Everyone has to pay careful attention to the words and/or the signs.  Yet the story is universal, so dramatic, and so moving that hearing and deaf alike are overcome by the emotional heartbreak of Silent Salzburg.  Not many productions can close such a large communications gap and bring the very different parts of the audience to the same emotional climax.  Silent Salzburg succeeds at something few would even try.

Of course, the cast gets a lot of the credit for making Silent Salzburg work.  Kate Noonan Rickers sparkles as Lisa, and helps both the hearing and the deaf make sense of the script.  Noonan has a compelling stage presence, and she uses it to her advantage.  Albert Tharpe III has done some acting before, and it shows.  His signs are clear, his emotions are genuine, and his delivery is spot on.  I credit Tharpe for introducing me to my first two jokes done in ASL.  Noonan translates them, but Tharpe delivers them with wit and a wink.

Hans’ stage parents, Shawn Harmer and Jannette O’Brien, are convincing, both when they are protecting Hans and when they are fighting over how to do that right.  Harmer’s best moments are when he has to confess some long forgotten sins.  O’Brien stands out when she puts her foot down and fights for Hans.  That said, though, what really struck me about Harmer and O’Brien was how well they portrayed one of the serious issues for parents of deaf children.  That issue is whether parents should learn to sign.  Neither Stephana nor Gerhardt can sign.  The question of parents signing plays out beautifully here, and therein lies some of the message for the audience.

Dan O’Brien plays uncle Otto, and he’s exactly the right type for the role.  He’s a bachelor, lives alone, and for those reasons alone, he is also one who might fear the Nazis.  O’Brien seems totally natural as he generously takes in his family for an extended stay.

Liesel Viser (Marlena) is Hans’ girl friend, and we can all understand immediately why he fell in love with her.  She’s beautiful, she’s smart, and she’s the kind of girl we all want for our sons.  It’s a fairly small but critical role, and Viser makes the most of it.

I don’t want to spoil the surprise, but Director Nicki Runge puts her own spin on Silent Salzburg.  She goes to the trouble to make sure the audience understands how difficult it is to communicate when we’re not all speaking the same language.  She makes her point, but to say more would spoil it for others.  Let’s just say that Runge does exactly what a director should do:  she put her own mark on this production.

Rachel Rose, Courtney Williams, and Shayne Montoya do yeoman’s duty, doubling as “Shadow Interpreters” and stage hands.  They made the show work by interpreting the spoken lines to ASL, and they did it onstage, in front of everyone, while making appropriate facial expression with their signs.  I didn’t understand the signs, but I couldn’t help but watch them.  It’s hard work, it has to be precise, and the timing is critical.  They were splendid.

The Silent Salzburg cast and crew is hitting the road for Fort Collins and Denver.  If you’re in either of those areas, check it out.  It’s a very special and rewarding theater experience, steeped in dark history, and played out in devastating emotional crises.  That’s a recipe for a fine evening at the theater.