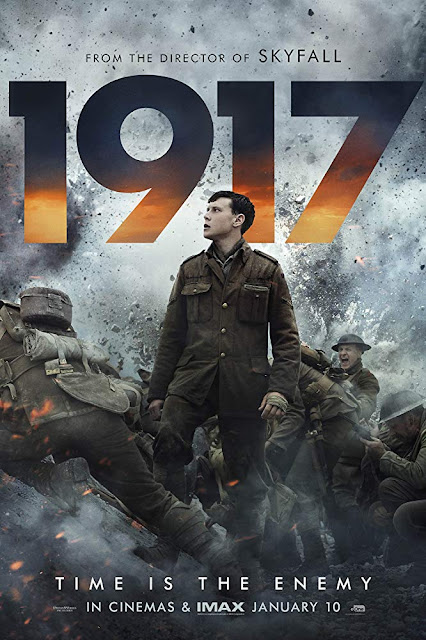 And now for something completely different.

For the first time, Theater Colorado is reviewing a film, namely 1917, the World War I story nominated for 10 Academy Awards, and the winner of 3 Oscars (Best Cinematography, Best Sound Mixing, and Best Visual Effects);

I’m adding 1917 to the mix here because my theater reviews will be sporadic.  Movies are much more accessible to a large audience, and I’d like to reach more readers with relevant content on Theater Colorado.

I grew up in an era of World War II movies, featuring mostly patriotic themes and glamorizing war.  John Wayne was in most of the ones I remember; Back to Bataan, Flying Leathernecks, and the like.  The Americans were the brave heroes; the Germans and Japanese were the bad guys.  Violence was more implicit than explicit.

World War I films have been fairly rare in my experience, with the possible exception of
Warhorse (2011).  1917 is not just one of those rare films about the “war to end all wars”, but, in my view, the most realistic and important war film since Saving Private Ryan.

As the film opens, we get a long shot of a peaceful meadow.  The camera zooms back from the meadow, and we meet two Lance Corporals, known best by their last names, Blake (played by Dean-Charles Chapman) and Schofield (George Mackay).  They are ordered to report to their commander for orders, where they are tasked with a suicide mission.  They are to cross enemy lines through “no man’s land” to warn other British units to call off an attack planned for the next day.  British intelligence has learned that the German army laid a trap for the1,600 attacking soldiers.  The attack will be a massacre.  No one really thinks Blake and Schofield will survive the first 10 yards, much less complete the mission, but they somewhat reluctantly follow their orders.  Blake, we learn, has been picked for the mission because his brother will be among the 1,600 victims of the German trap.

The trek through the combat zone is indeed a nightmare; the courage of Blake and Schofield is utterly overwhelming.  Faced with certain death at literally every step, the Lance Corporals resist, persist, and dare to move on against the longest of odds.  As to whether they are successful, you’ll have to see for yourself.

Director Sam Mendes has done Spielberg one better.  He shot 1917 in one continuous take…or at least mostly in one take, with some editing magic.  The effect is to give the film a “first person” perspective.  You follow the the story as if you’re there in real time, seeing what the actors see, hearing what the actors hear, and walking miles in their shoes.  Needless to say, it’s damn scary to be walking in those shoes.

Some movies are entertaining.  Others teach us life lessons.  1917 is the latter.  We too often take for granted the suffering and sacrifice of the young men and women who volunteer to put their lives on the line.  1917 won’t let you take that sacrifice for granted.  Victory is not won by the generals in the large battles.  It’s won by the foot soldiers, the sailors, and the airmen who achieve small victories at great personal cost in their own personal war.  Those small victories won by individual men and women are what wins the larger battle.

Without being preachy, 1917 will give you pause about the purpose and value of war.  The film doesn't take sides, but it's difficult to justify the carnage even on the small scale of a couple of days in the lives of two Lance Corporals.  Regardless of the outcome of any war, the losses far outweigh the political gains that may be won.  It is axiomatic that some wars are inevitable and necessary, but that does not diminish the cost in lives lost and lives forever changed.

I stood in the American Cemetery in Normandy, and I stood at ground zero in both Nagasaki and New York City.  These are places where the cost of war is undeniable.  1917 took me back to those moments when I was forced to acknowledge the state sanctioned mass murder we call war.  I don’t know if 1917 should have won the Oscar for Best Picture of 2019.  I didn’t see very many of the other nominees.  But I do know it’s the best film I've seen in a very long time.

Some movies look great on a large television.  Other movies, however, look best when seen on a huge screen in a darkened theater permeated with the scent of popcorn.  1917 is one of those movies.

There are many ways to recognize the sacrifice and service our veterans.  Don't hesitate to do so if you can.

Working for peace is a noble if lost cause.  The effort is worthwhile even if the results are meager.

A Gentleman's Guide to Love and Murder 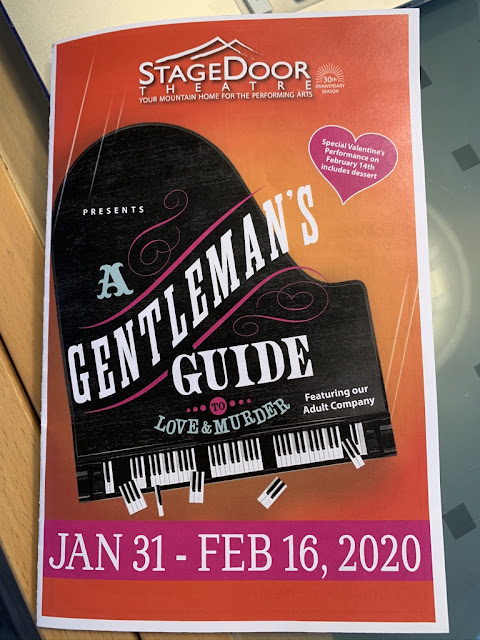 A Gentleman's Guide to Love and Murder

Music and Lyrics by:  Steven Lutvak

Based on a novel by:  Roy Horniman

You can’t judge a book by its cover, and you certainly can’t judge a play by its title.  Any title using the words “Gentleman,” “Love” and “Murder” is bound to conjure up images of romance, tragedy, drama, and mayhem.  Stage Door Theatre’s “A Gentleman’s Guide to Love and Murder” (hereafter “Love and Murder”) is not a romance, nor a tragedy or a drama.  Surprisingly, it’s a highly entertaining musical comedy triumph.

“Love and Murder” opens with a warning for the faint hearted:  “LEAVE NOW.”  Ignore it.  It’s bad advice.  This is a high energy comedy that won four Tony awards (including Best Musical) in the 2014 Broadway season.

Since I don’t do spoilers, I’ll limit my comments on the plot to saying that palace intrigue can be a dangerous game, but the results can sometimes bring about righteous justice.  The plot doesn’t dwell on the morality of “gentlemen,” “love,” or “murder,” except to squeeze every possible laugh out of each. 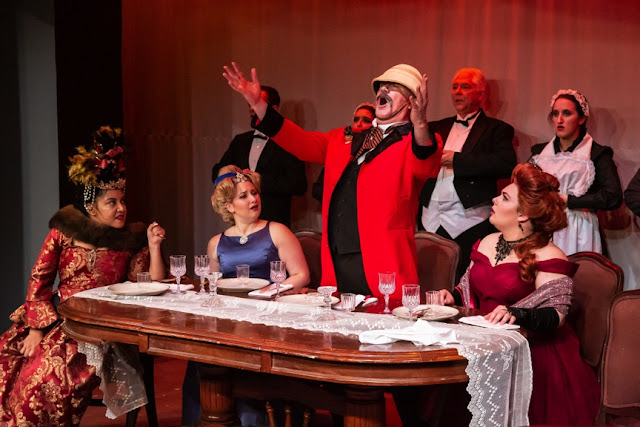 The cast is uniformly excellent.  Chris Burroughs brings his “A” game in every scene, whether he’s dabbling in love or crime.  He’s an accomplished and talented singer who seems to glide through the show effortlessly. Burroughs plays off his female leads with a wink and a smile, charming everyone in the room.

Those female leads, by the way, are a joy to watch…and to hear.  Both Maria Giovanetti and Jennasea Pearce are songbirds of the first order.  It’s easy to imagine both in a talent pipeline straight to Broadway.

Clyde Sacks has the dubious honor of playing (by my count) ten characters in “Love and Murder.”  Two of those characters are women.  I doubt many actors would take on such a challenge.  Sacks makes it look like the most natural thing to do.  He skillfully draws bold lines around each of the nine characters, making them distinctly different.  He’s got a gift for comedic timing.  His scene with Burroughs for “Better with a Man” is hilarious.  In fact, if one adds up the laughs in “Love and Murder,” the lion’s share belongs to Sacks.

The technical gears that drive the performance were well done.  Dean Arniotes’ set is versatile and functional.  Susie Couch’s costumes are gorgeous.  The small orchestra is invisible while putting out a professional sound track for the cast.  Lights and sound were effective without being intrusive. Every detail, right down to Chris Burrough’s marvelous wigs, was spot on.

If one is to pick any nits here, a stage hand made a brief unschedule appearance onstage, and a camera prop got misplaced.  That’s it.  From start to finish, “Love and Murder” is a polished, professional and highly entertaining production.

Stage Door marshaled a small army of actors, musicians, technicians, and assorted volunteers to make this show happen.  The list below is long, but still partial.  It’s clear that each and every person involved in “Love and Murder” gave 100% to guarantee the success of the show.  This is a personal hat tip to those involved, whether listed below or not.  Well done. 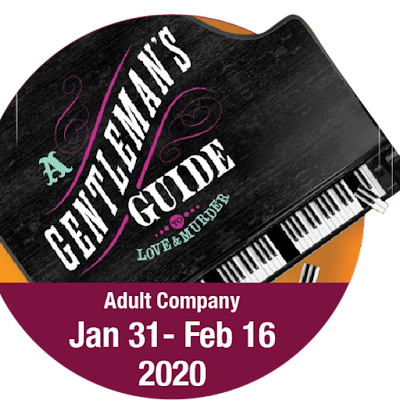 This show gets a PG rating for some vulgar gestures.

The performance scheduled for Friday, February 7 was cancelled due to the 15-20 inches of snow that fell during that day.  Due to the cancellation, tickets for the remaining performances may be scarce.

Glad to be back. 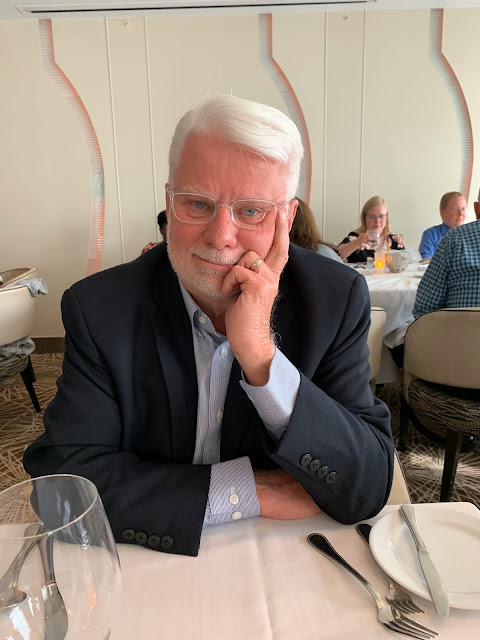 I ran into one of my theater friends recently.  He told me that he thought I had “dropped off the face of the earth.”  As Mark Twain once said, “reports of my demise are greatly exaggerated.”

That said, though, this is my first post to Theater Colorado in nearly 2 years. I dropped out of the theater hobby because it was time for a break.  My hobby had turned into a job, and it was not the kind with tangible rewards (no paydays).  I was spending weekends seeing shows, and weekdays writing up my thoughts.  Each post is a 4-6 hour task, not including the travel time and seeing the actual show.  At the end of each year, I did a "Bill's Best" post.  It was eating up ALL of my free time.

Beyond the time commitment, I was having some issues in the darkness of the theaters.  My vision (especially in theatrical fog) was noticeably reduced.  My somewhat diminished hearing made it difficult to hear lines, especially when sung.  And since I do not take notes during a performance, it became more difficult to remember the details of the performance.

So I’m going to try again.   I’ve gotten better at compensating for the issues in the darkness.  But I won’t go back to wall to wall posts.  It’s a quality versus quantity problem.  Updates will be sporadic but ongoing.

Although I took a break from writing, I never took a break from seeing some amazing productions.  If you weren’t aware, most theaters comped my ticket(s) in the past.  From now on, I’ll see the shows I want to see and I’ll pay for them.  Whether I write up a review will be a case by case decision.  My first post will be Stage Door Theater’s “A Gentleman’s Guide to Love and Murder.”

Thanks for all the support you have given to Theater Colorado since it started in 2012.  Much appreciated.  Not a day goes by that I don’t get hits on Theater Colorado.  It’s nice to know that people still occasionally stop by to check it out.