I’ve been retired for more than five years, but I distinctly recall the days when work was a four letter word.  Hellcab made me and probably a lot of others realize that our jobs are not as bad as they could be.  At least I’m wasn't a white guy driving a cab on the south side of Chicago.

Chicago has always had a reputation as a tough place; Al Capone and John Dillinger were not good neighbors.  Despite some serious gentrification, Chicago today still has a high rate of violent crime, and the south side is arguably no safer than when Hellcab premiered in 1992.

Set on Christmas Eve, Hellcab is frantic, disturbing ride through the frozen Chicago cityscape, from the upscale Watertower Mall to the battlefield of the south side.  As a cross section of the city’s citizens hop in his cab, our cabbie (Roy Ballard) is confronted with a full panorama of humanity’s capacity for chaos.  It’s the season of joy, but if you’re riding the Hellcab, it’s also the season of genuine strife.

Ballard plays the cabbie as a sincere, respectable working guy stuck in a jungle of social outliers.  It begins with his first fares, an older couple, giddy with religious zealotry.  They try to convince the cabbie to go to church with them (“some things are more important than work”).  Kern bookends his script with his least offensive characters.  The religious couple in the first scene is harmless; his last fare of the night (Désirée Myers as a depressed architect) delivers a dose of sanity to a chaotic Christmas Eve.

Director Chris Medina demands a lot of his cast; other than Ballard, all play multiple roles.  They respond with some stellar work.  Myers is compelling in the final scene, mourning the loss of her mother but carrying on as best she can.  Medina’s touch in the last scene is striking.  Before they part, Meyers reaches out takes Ballard’s hand.  They pause, holding hands for all to see.  The image is beautiful, connecting the back seat to the front seat, the black hand to the white hand.  It’s the image we need on Christmas Eve.  Healing hands, together, bringing some peace to the chaos.

Speaking of getting into the back seat for some naughtiness, that’s exactly what Girl #1 (Erica Erickson) and Girl #2 (Alicia Franks) do.  It’s one of the lighter Christmas Eve moments in Hellcab, and one that plays into a common cab fantasy.  Franks and Erickson seem to enjoy putting our cabbie in a difficult position, and Ballard is convincingly confused about how to handle his passionate passengers.

Dante J. Finley’s roles are often a little too stereotypical (baby daddy, a pitiful boyfriend) for my tastes, but his X-Hat performance is a standout.  The X-Hat is a black baseball cap with a big white X on the front, a reference to Malcolm X.  Finley is taking some static from his white cab driver colleagues because he won’t pick up black customers.  It’s a stark reminder that prejudice is sometimes found where we least expect it.  Finley’s X-Hat is an empty gesture to one of the most influential and most controversial leaders of the 20th century civil rights movement.

Of course, the one constant in the ever shifting cargo of Hellcab is the cabbie, Roy Ballard.  Ballard is riveting, constantly trying to make small talk with his riders, but always alert to the danger around him.  He glances over his shoulder, watches his rear view mirror, and tells us how much he hates his job.  We ride along with Ballard, wondering whether any of us will be able to finish this shift.  Ballard is a cabbie we would all want; he's compassionate and concerned.  He's a good guy in a bad situation, and he's got more courage than most of us could muster.

Recently, I had the “opportunity” to spend some spare time waiting in line at the El Paso county Citizen’s Service Center at 1675 W. Garden of the Gods Road.  Like Kerns’ Hellcab, you will meet a diverse cross section of the community there.  Single mothers with kids in tow.  Jobless men and women looking for work.  Spanish speaking folks trying to figure out how to register the used 10 year old Honda Civic they just bought.  It’s where democracy meets the bureaucracy, and it’s a perfect people watching place.  Try it sometime, even if you’re not there on business.  Just take a seat and spend a little time looking at the faces of your neighbors.  You might see them as the real people they are rather than the abstractions we fear.

All of which makes Hellcab one of the best produced and most profound shows I've seen yet at Funky Little Theater Company.  Hellcab is set in Chicago, but it could have been set anywhere. Wherever you go, there are homeless desperate souls in our midst who are victims of drugs, crime, and other assorted indignities.  We can ignore them, but that doesn’t mean they don’t exist.  They do.  Funky Little Theater’s Hellcab gave us a harsh Christmas message.  It’s some tough love, but it’s also a message we need to remember all year long. 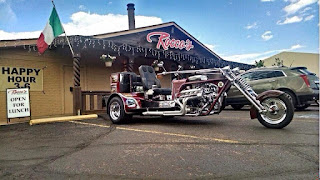 Rocco’s Italian Restaurant is easy to find; it’s in what used to be the Steaksmith location at Academy and Maizeland (3802 Maizeland Road).  We met friends there for dinner before the show at Funky.  It’s about a 15 minute drive to/from the theater, weather and traffic permitting.

The draft beer selection is small, but it’s a full bar and a decent wine list.  The menu includes a half order of the lasagna, which for me would be plenty.  We had the cheesy Italian garlic bread appetizer and split a pizza.

Service was splendid.  Stephanie knew we had to be at Funky for a 7:00 show, and she made sure we made it on time.

Hellcab is adult material.  It’s probably OK for mature teens, but PG-13 for the young teens.  There is ample free parking in front of the theater.

While Hellcab is strong stuff, it is somewhat dated.  There are no murders.  The citizens of the south side may look at Hellcab as the "good old days" for that reason.

For a variety of reasons, I was not able to attend Funky’s Hellcab until closing weekend.  This show closes on December 19, 2015, so if you missed it, well, you really did miss it.