John Patrick Shanley is a somewhat unusual writer; his academic record is rather sketchy.  From the program:

“John Patrick Shanley is from the Bronx.  He was thrown out of St. Helena’s kindergarten.  He was banned from St. Anthony’s hot lunch program for life.  He was expelled from Cardinal Spellman High School.  He was placed on academic probation by New York University and instructed to appear before a tribunal if he wished to return.  When asked why he had been treated this way by all these institutions, he burst into tears and said he had no idea.”

Or, one could say, the young Mr. Shanley was a typical Irish kid.  Rebellious and misunderstood.

Despite his academic challenges, those who doubted Mr. Shanley’s literary credentials must now be enjoying heaping portions of crow at every meal.  Shanley’s revenge is that he is living well as a writer of Irish tales, including Outside Mullingar.  He has won a Pulitzer Prize for Drama in 2005 (for Doubt:  A Parable), a Tony Award for Best Play (also for Doubt:  A Parable), and an Oscar for Best Original Screenplay in 1988 (for Moonstruck).  Not a bad résumé, considering he flunked kindergarten.

Shanley’s Outside Mullingar is a near perfect mix of love story, comedy and drama.  “Near perfect” because the story takes an improbable twist at the end; one more revision to the last draft should have tweaked that twist.  Even so, Outside Mullingar captures the human spirit of the rural Irish characters as they deal with lives that are limited to live just outside of a small Irish town (Mullingar).

Two gates.  That’s what it takes Anthony (Timothy McCracken) to get from town to his farm property.  Anthony’s aging father sold a small sliver of the farm to his neighbors (Aoife and her daughter Rosemary) for 200 pounds sterling.  That sliver of land includes the only access to Anthony’s farm.  He has to enter, stop at the gate to the lost sliver, drive though the gate, then stop again at the gate that is the entrance to his farm.  It’s not just annoying.  In bad weather (it rains a lot), it’s cold, wet, and aggravating.

That small sliver of land, transferred to the Muldoons, makes the farm a landlocked island.  Anthony’s father, Tony (Chris Kendall) is considering selling the property, but without access from the road, it is virtually unmarketable.  Nobody will buy a piece of land to which they have such limited legal access.

Despite this set up, Shanley’s script is (fortunately) not about Irish real estate law.  It’s about the relationships between the Muldoons and the Reillys.  It is those relationships that make Outside Mullingar so preciously simple and poignant.  Shanley has put us in a small place with a small number of characters going through small, slow changes that add up to a final blowout supercharged conclusion.

Billie McBride (Aoeife, pronounced eefa here) is the perfect cranky and witty little old lady with a disputed sliver of land.  McBride has a talent for British and Irish accents, making her both credible and lovable here.  She’s a perfect foil for Tony (Chris Kendall), taking verbal jabs at him over the right of way to the property.

Kendall, for his part, is on fire as Tony.  He’s funny, he’s vulnerable, and he’s a charming old coot.  His last scene is perhaps the best work I’ve seen from Kendall.  He’s dying, and he makes a death bed conversion to reconcile with his son Anthony.  It’s an extended dose of sincerity, love, and compassion, and Kendall’s delivery lands on the stage like the thud of 100 pounds of Irish potatoes hitting the floor.  I was watching the audience reaction.  Some were wiping tears from their eyes as Kendall poured his heart out on the BETC stage.

Once Tony and Aoeife move on, though, the stage belongs to Timothy McCracken and Emily Paton Davies.  The two have a full blown confrontation over how things got so bad between them.  It’s contrived, but it has enough energy and emotion to put the us on the edge of our seats.  Paton Davies traps McCracken and then rips him up.  McCracken, for his part, slumps away from confrontation until he can stand it no more.

Unlike most Irish plays, Outside Mullingar permits a happy ending.  The passion and chemistry between the lovers/fighters is palpable.  Paton Davies fights for what she wants, reminding me of a line from A Midsummer Night’s Dream:

“Though she be but little, she is fierce!”

Paton Davies is beyond fierce, never letting up until she breaks Anthony down.  Unrelenting and yelling, she forces McCracken to speak the line that keeps this script from reaching perfection.  (You have to buy a ticket to hear it yourself.)  Once he breaks through the shell he has created for himself, McCracken is able to admit his feelings for Rosemary.  McCracken and Paton Davies have one of the longest, tightest, most electric embraces I’ve seen on stage.  Their passions unleashed, they can finally act on their feelings.

Director Rebecca Remaly has brilliantly paced this production; she slowly builds the story until it explodes in the final scene.  Remaly’s touch gives Paton Davies the permission and the mission to be as strong and as bold as a woman can be.  I particularly liked the scene where Paton Davies and McCracken split a bottle of Guinness Stout.  It’s an Irish institution, and it was a tenderly executed icebreaker for the pair.

I’m well aware of the criticism of Shanley’s script; I just disagree.  I think it’s a poignant emotional jewel that could have been better.  For those who say it’s not authentic because there’s not enough swearing an drinking for an Irish play, I say “poppycock.”  Irish stereotypes are exactly that; they contain a measure of truth but are hardly universally true.  Shanley’s characters are real people whose lives are not lived in a pub with a pint.  Rather, they live in harsh conditions, with limited experiences, and often in relative poverty. 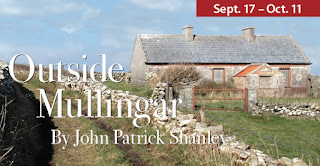 And those, frankly, are MY kind of people.

Free parking is available behind the Dairy Center and on surrounding streets.  There is construction going on at The Dairy, as they renovate the property.  The temporary main entrance is on the west (back) side of the building.  After entering, go down the long hall…the box office will be on your left.

We made reservations at the Chautauqua Dining Hall, a Boulder tradition since 1898.  The restaurant is run by Three Leaf Farms (TLF), and 100% of the TLF harvest is used in their affiliated restaurants.  Seasonal and traditional favorites are served in the dining hall and on the wrap around porch.  We were lucky and got a table on the porch.

Chautauqua Dining Hall is on the grounds of Chautauqua Park in Boulder.  The park is at the foot of the Flatirons foothills, and conveniently located near the far west end of Baseline Boulevard.

We arrived about 1:30 on a Sunday afternoon, so the dining choices were from the brunch menu.  I had the Croque Madame sandwich and an Upslope lager craft beer.  Both were perfect for the late summer day on the porch.

Parking at Chautauqua is awful; plan ahead for a 5-10 minute walk from wherever you can find a place to park.  Reservations recommended.