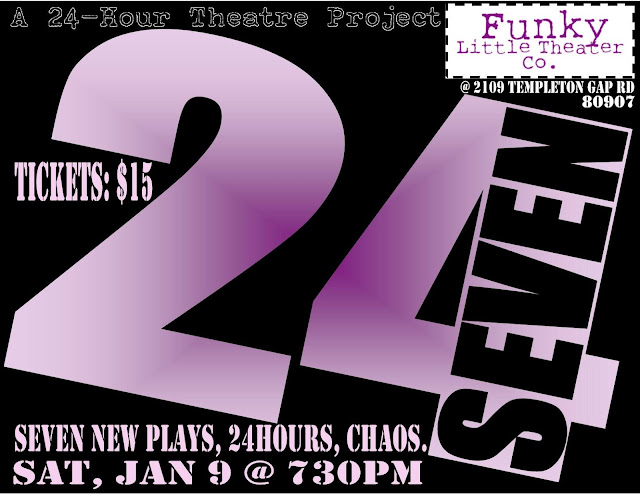 4.  Jenny Maloney, The Android At The End of the Sidewalk.

6.  Jeff Keele, Fashion of the Times.


Music by:  The Funky Four

Funky compresses the creative process into a single day.  Writers gather on Friday night around 7:00 PM to get their assignments:  a cultural reference, a required line of script, a required character, and a prop.  The writers have until 4:00 AM to complete a 10 minute script.  Directors report at 6:00 AM, and each is assigned a script to review and stage for the 7:30 PM Saturday night performance.  Actors report at 8:00 AM to memorize lines and rehearse.  It’s a creative process on steroids, with a single performance of the finished product.

Obviously, there are tremendous strains on the participants, and some inherent unevenness in the results.  Some 10 minute plays will be brilliant; others less so.  The point, however, is not so much the product as the process.  It’s a giant collaborative high wire act requiring talented people to work together under difficult circumstances.

So here’s the threads that were required for each script:

2.  Required line of script: “I am Darth Vader, an extra-terrestrial alien from the planet Vulcan.” (Or words to that effect.)

The required cultural reference was a bit of a gift to the playwrights; Trump is a soft target that the writers unanimously (and sometimes brilliantly) carpet bombed.

That said, here’s a brief summary of the results.

Atkinson’s script opens with an oblivious woman smoking what appears to be a large joint.  She finally notices the audience.  “Oh.  Hi there.  Didn’t see you come in.”  Apparently stoned, she’s not sure what to do with an audience.  What follows is a fairly disorganized, seemingly impropmptu effort to entertain under difficult circumstances.  The script is a bit of a poke at the 24/7 process itself, demonstrating how difficult it is to create entertainment out of nothing.

Swenson serves up a sci-fi scenario, where humanity is about to move to the next level (“Phase Omega”).  It’s a huge project, and it started with a huge staff of engineers to create Phase Omega.  Now that it’s nearing completion, however, the last of the remaining staff is being laid off.  Swenson’s script is ambitious; he includes a romantic theme along with saving humanity.

Berdinis sets her story in a police station, where two homicide detectives are grilling a suspect.  It seems there has been a murder (the victim being the hapless cultural reference), and the suspect’s alibi is dubious.  Berdinis' script is funny, focused, and much more polished than one would expect under the circumstances.  Berdinis’ next project begins next week when her full length play Italy opens at Funky.

4.  The Android At The End of the Sidewalk by Jenny Maloney.

Maloney is well acquainted with writing for the stage, and it shows in her 24/SEVEN entry.  The android here is actor Bryan Dufaud, and he makes a great droid.  He’s short circuiting from getting drenched, so naturally his female costars help him out of his rain soaked shirt.  Dufaud does his best robotic moves trying to get his female humans to help him out of a big hole.

5.  The Garbage Man by Jordan Mathews.

Mathews litters the stage with sleeping homeless guys and garbage, setting up an appearance by “The Garbage Man” (insert cultural reference here). Instead, we get homeless actor Drew Frady.   It’s an interesting script, made more so by Frady’s antics.  Wearing a cooking pot for a helmet, Frady handcuffs his co-actors to a shopping cart, telling them the key to the handcuffs is in “your soul.”  Right.
6.  Fashion of the Times by Jeff Keele.

If your head is cracked wide open, there is no debate.  It’s not “fashionable.”  If you have a stab wound in your neck, same result.  Keele puts his characters into a difficult reality, where a doctor must treat both physical and emotional wounds.  It’s a biting statement about how fashion is sometimes detached from reality.

I was fairly harsh with the only other script I’ve seen by Mr. Royal, but his Lil’ Demagogue is a tightly written gem of a short story that ends with a punch.  In a bit of a Mary Poppins scenario, Royal shows us parents interviewing a nanny candidate for their 5 year old son.  It seems their son has gone beyond the usual mischief of a kid into seriously deranged behavior.  I won’t give away the ending, but it’s a brilliant use of the required cultural reference.

This was the 7th edition of 24/SEVEN, and it’s a great opportunity for local writers, directors, and actors to flap their creative wings.  Funky and Chris Medina go to great lengths to develop new material and new talent.  It’s an important contribution to the local live theater community, and for that they deserve our praise and recognition.

By the way, after the show, on the way out of the theater, the audience members are encouraged to vote for their favorite 10 minute production.  I don’t know how the voting turned out, but I tell you that my vote went to Justifiable Homicide.  As Chris Medina said, though, they are all winners. 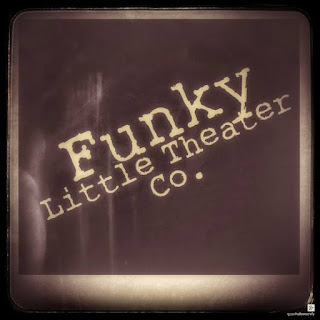 Out of respect and admiration for the creative process, I have done what they did:  I wrote up this post in less than 24 hours.  Granted, my task is much easier than creating original work, but I could not in good conscience ponder a post for several days after seeing what can be accomplished in a single day.

Due to the unpredictability of 24/SEVEN, discretion should be used before bringing small children to this event.

Although not identified by name (neither the group or individually), Artistic Director Chris Medina referred to the 4 musicians as the “Funky Four.”  Good enough for me.  They added a preshow jazzy jam set, and played as transition between the 7 10 minute plays.     The live music was a first for Funky Little Theater.  I hope it’s not the last.  The Funky Four added just the right ambiance for an evening of edgy theater.

There is ample free parking in the strip mall parking lot just at the Funky Little Theater.  Concessions are available and can be consumed in the theater.

We stopped at BJ’s Restaurant & Brew Pub at the University Village Shopping Center (5150 N. Nevada).  It’s one of our favorites for a good meal at a good price with consistently excellent service.  I had the flatbread Extreme Pepperoni pizza appetizer (which is plenty to eat).

Roxie had the North Beach Mahi-Mahi and Shrimp (roasted mahi-mahi seasoned with Big Poppa Smokers’ Desert Gold Rub, sautéed with shrimp, red onions, tomatoes, Kalamata olives and spicy garlic, served over couscous with fresh herbs).  There wasn’t a scrap of food left on either of our plates.  Oh.  She also had a Skinny Margarita.  Nothing left in the margarita glass either.

4.  Mandy Matthews, The Android At The End of the Sidewalk.

6.  Michele Pantle, Fashion of the Times.

4.  The Android At The End of the Sidewalk:  Autumn Silvas, Monica Erck, Bryan Dufaud.