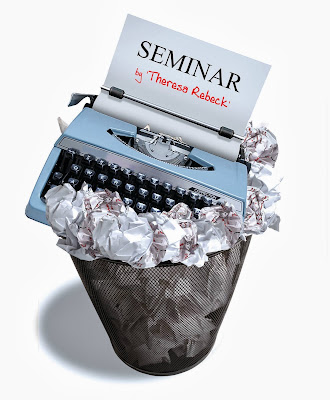 "The biggest problem for writers is that their readers are all human beings....Writers aren't people."
Paraphrased from Seminar.

Indeed.  Writers aren't people...at least not what we might call normal people.  They suffer from being insecure, introspective, and they have a burning passion to say something profound to the rest of us.  Obviously, failure is nearly guaranteed.
The chasm between novice writers and their potential readers must seem insurmountable to those trying to break into the business.  That is, if it can be described as a business; perhaps it's better to consider it a bleak, soul sucking career choice.
Theresa Rebeck's (you may know her as creator/producer of TV's Smash) Seminar could hardly be described as an action piece; the topic here is not action but ideas.  Profound, interesting, and important ideas wrapped in smart, crackling dialogue that humanizes the creative process.  Rebeck's densely packed prose puts four aspiring writers at the mercy of a ruthless "master" (Leonard, played here with a brutal glee by John C. Ashton) of the craft.
Boulder Ensemble Theatre Company's (BETC) current production of Seminar sparkles and soars.  Director Stephen Weitz brings the creative process into razor sharp focus with a brisk pace that keeps both the actors and the audience engaged.  He orchestrates a blue chip cast, and coaxes marvelous performances from each of the five actors.
Ashton is a master of his acting craft, and his Leonard is a conflicted but dedicated writer and teacher who can't suffer fools for a moment.  He can crush dreams with a glance, or, occasionally, create those dreams with casual indifference.  He's a joy to watch, even when he's brutally savaging a student.
Sean Scrutchins (Martin) is so sensitive that he can hardly bring himself to share his writing with Leonard.  Scrutchins deftly struggles with the conflict between the freedom he needs to be creative and the stifling requirements of a "successful" writer.  He has no literary connections, no friends in publishing, no famous parents, no money, no editor, and he's not willing to suck up to any publishing authorities.  In other words, he's doomed as a writer.
Scrutchins brings the conflict into focus for us as he struggles with taking the next step in his career.  Should he sacrifice some of his creative freedom for a key to the successful writer's world?  It's a profound question, and one that all writers must eventually answer for themselves.
For those who have followed Scrutchins' Denver acting career, there was a delicious irony in Rebeck's script.  Leonard tells Martin that a writer's life is comparable to the "nine circles of hell," a reference to Dante's Inferno.  The irony is that Scrutchins won the 2012 Henry Award for his performance in Curious Theatre's 9 Circles.  Scrutchins is well acquainted with the concept of Hell; that he finds himself in Seminar being damned to that fate a second time is an unexpected twist.
Mary Kay Riley as Izzy (willing to sleep her way to success) and Devon James (oversensitive, self indulgent, and marginally talented) as Kate play roles that border on stereotypes.  Both are marvelous, providing foils for Leonard's ceaseless indignities and seducing him for potential career opportunities.
Matthew Blood-Smyth as Douglas is insufferable, and that's a good thing.  He's a self centered, egotistical empty suit, capable of speaking in circular paragraphs totally devoid of any substance.  Portraying the least likable character in a production is a dubious distinction, but Blood-Smyth delivers an annoying Douglas as only a gifted actor could.
Ron Mueller's set design is gorgeous; it got an ovation from the audience as it morphed from Kate's apartment to Leonard's.  Costume designer Kevin Brainerd has dressed the performers in appropriate and functional outfits that enhance the performances.  Both the onstage and offstage talent here is gifted and in synch; they create a seamless, top shelf performance.
There are important questions in Seminar:
Is a successful writer one who writes great stories, or one who makes a lot of money writing mediocre stories?
Can creativity ever be taught, or is it an internalized gift only a few will ever have?
Is brutal criticism an effective teaching tool or a sadistic way to cull the weak from the herd?
Important questions, to which Seminar provides no simple answers.
Seminar reminds me somewhat of Master Class, Terrence McNally's vision of Maria Callas teaching opera to very talented but hapless victims of her enormous ego.  Neither Master Class or Seminar are easy to watch.  The deliberate emotional destruction of talented, dedicated people is not pretty.  The difference between the two plays is that Seminar offers some hope, some redemption for the truly talented; whereas Master Class offers no such hope.
The last line of the play is Leonard's:  "So do you want to be a writer or not?"  While one can criticize the play for not answering that question, it is unquestionably the proper question for Seminar.  The answer, ultimately, is personal rather than universal.  There is no right answer.  It's a choice, and each writer must make that choice for him or herself.
Last season, BETC gave us an excellent insight into writing with the extraordinary Ghost Writer.  Seminar is a potent follow up hit.  If you're a fan of thought provoking, profound theater that will make you think about important issues, you need to see Seminar.

Posted by Bill Wheeler at 9:26 AM No comments: Links to this post