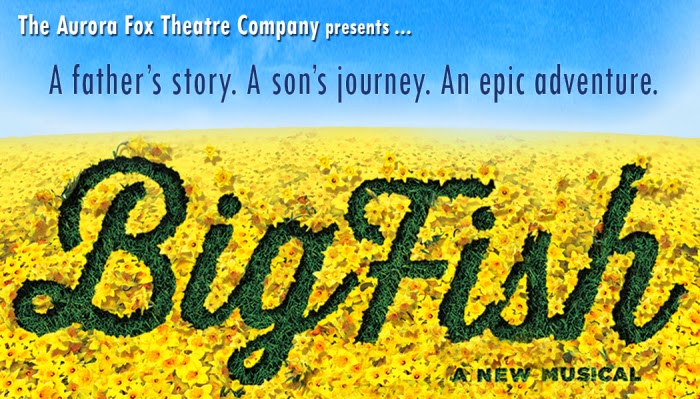 Book by:  John August, based on the novel by Daniel Wallace and the Tim Burton film. 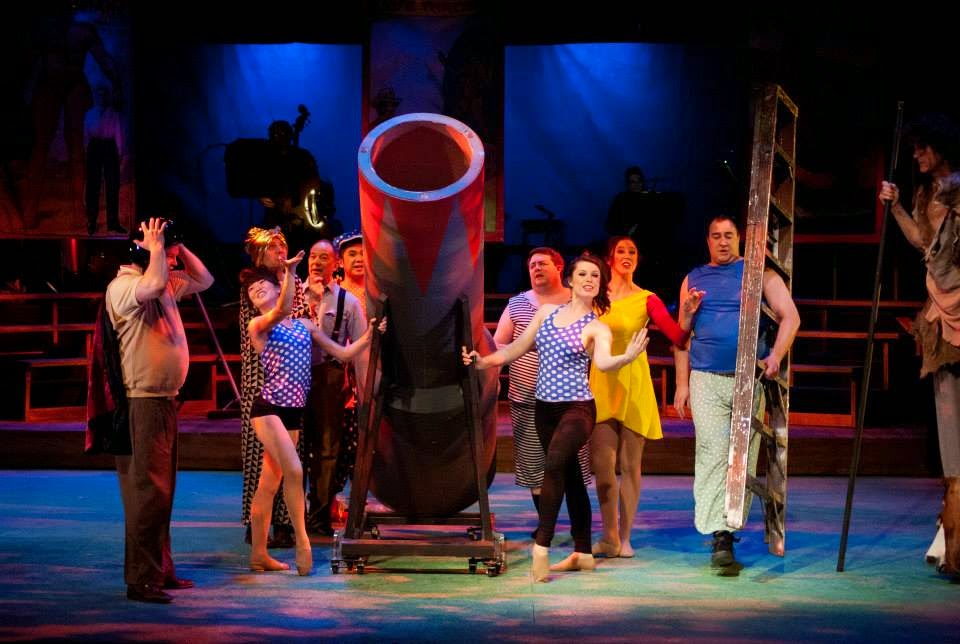 Big Fish is a Big Show.  In fact, it’s a REALLY Big Show (apologies to Ed Sullivan).  The Aurora Fox has pulled out all the stops here, and it shows.  There is a circus atmosphere, and you’ll be treated to all the traditional side shows:  Karl the Giant, a knife thrower, a weight lifter, a juggler with colorful handkerchiefs, and yes…a man shot out of a cannon.

Fortunately, the side show doesn’t distract from or obscure the main attraction:  a touching story of unresolved father/son issues and reconciliation for all involved. Big Fish is a family values story with music, muscle, and an important message:  we all have secrets.  Some secrets are meant to deceive us, but others are meant to protect us.

Eddie Bloom (Kevin Schwarz) is a story telling traveling salesman who loves his wife Sandra (Megan Van De Hey) and his son Will (Matt Summers), but misses out on a lot of domestic chores and child rearing because he’s never home.  The stories he tells of witches, mermaids, and giants are justification for son Will to be skeptical of nearly everything his father says.  Kevin Schwarz is a fantastic Eddie, with a booming voice and a lovable demeanor.  He embodies both the loving husband/father role, and his secretive mysterious side in a way that seems nearly natural.

Big Fish opens at the river bank, where Eddie tells a whopper about the “big fish” Will caught, and gives everyone a lesson on how to get a “big fish.”  The best way to catch fish, apparently, is by doing the Alabama Stomp.  The Stomp is (literally) a foot stomping musical introduction to the characters and the charm of Big Fish.  The Alabama Stomp music is catchy, the staging is clever, and the choreography is a tasty preview of the fun ahead in this story.

Putting a Broadway musical on the small Aurora Fox stage is a challenge, but one that the company has met with style.  The best example of meeting that challenge comes near the end of the first act, as Eddie is retelling the story of how he met Will’s mother.  It is a magic moment; the Fox stage literally turns into a field of daffodils.  It’s visually stunning, and it’s a triumph for Director John Ashton III and Set Designer Charles Dean Packard.

Megan Van De Hey (as Sandra Bloom) brings her marvelous voice and “light up the room” smile to her role.  She’s a redhead here, and we know instantly why Eddie was attracted to her.  She and Schwarz have a sincere and authentic chemistry.  Van De Hey is outstanding in every scene, but especially so as she sings I Don’t Need a Roof to Eddie.   Her emotions are quietly spilling over and onto the stage as she holds him in her arms.  It is another Big Fish magic moment, and Van De Hey nails it.

Young Will (Nate Patrick Siebert) is one of the finest actors/singers/dancers of his age (I’m guessing 12-13) in Colorado.  He recently demonstrated his talent and his enthusiasm as Michael Banks in Mary Poppins, and he’s very well cast here.  He is a natural talent, and his performance as Young Will is light years beyond what we would normally expect of a guy his age.

The ensemble is very strong, as is amply demonstrated in the first act number Little Lamb from Alabama.  The talented trio (Megan Van De Hey, Malerie Jo, and Seles VanHuss) tries out for the circus, and knocks it out of the park.  The harmonies, the choreography, the costumes, and the catchy tune are all top shelf.  It’s a musical highlight of Big Fish, unless you’re the Ringmaster.  He can’t use the trio in the circus unless they can teach elephants do that number.  Let me be clear.  You ladies are ALWAYS welcome to sing, dance, and act for me.  You rock, elephants or not.

The entire cast here is exemplary, and the technical work is no less so.  El Armstrong’s strong sound design gives the audience a real rock skipping experience, with the “plink” “plunk” of the skipping stone going from the front of the room to the back.  Jen Orf’s lighting design is a rainbow of surprises, whether she’s lighting a field of yellow daffodils or a night scene in the forest.  The costume design by Caroline Smith is stunning in that dimly lit forest, with a half dozen witches dressed to disappear while standing right in front of us.  Her design for Karl the Giant (Mark Ribald) is amazing; the illusion of the giant is perfect.  That can walk in the costume is surprising; that he can dance in it is just amazing.

Despite the excellent production and performance, I do have a quibble with the Big Fish script.  I know this is a musical, and I know that Broadway loves a happy ending.  Still, the inevitable death at the end of Big Fish is not just a happy occasion, but a triumphant one.  Everyone is there to celebrate as Eddie wades into the river and slips under the water.  It’s a flawed climax, and I don’t buy it.

Life, and death, isn’t like that; death is painful for both the victim and the family.  It’s untidy.  It’s ugly.  It’s traumatic.  To paraphrase C.S. Lewis, great love inevitably leads to great loss.  Lewis is right, Big Fish is wrong.  There is great love here, but not great loss.  It’s a contrived “happy ending,” and it did not ring true for me.  I know that many in the audience were moved to tears.  I was not.

Script quibbles aside, Big Fish is a big story, a big show, and a very big success for all involved.  John Ashton’s Director’s Notes in the program tell us why this story is important.  We make choices every day, and sometimes they don’t work out as well as we hoped.  Reconciling with estranged family members may be difficult, but failing to do it can be regrettable. As John Ashton put it:

Here’s to getting over hard feelings and loving each other the best we can.  That’s pretty much what this show is about.

Wise words, backed up by Ashton’s marvelous production demonstrating how we can get over those hard feelings.  Now it's up to us to go on and love each other the best we can.

This show is suitable for all ages, with one caveat.  Younger kids may be disturbed by the death of a parent.

There are no restaurants in close proximity to the theater.  Well, that might not be exactly true, but E. Colfax is more of a fast food mecca than a sit down restaurant destination.  We stopped a few miles away at Casey’s Bistro & Pub at 7301 E. 29th Street, Denver.  It’s a trendy Irish pub in the Stapleton neighborhood, and only a 10 minute drive to or from the theater.  The Happy Hour is 3:00-6:00 daily, and we sat down at 5:50.  We were able to order sliders, a Guinness, and a Smithwick’s before the specials ended, and the total tab was just over $20.00.  The sliders were plenty to eat, and much tastier than some of the bar food I’ve had in other places.