Ranch Dressing and Other Coping Mechanisms 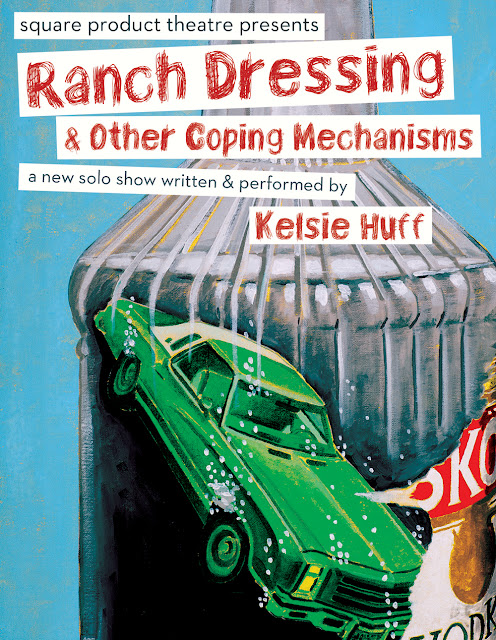 If you’re going to do a one woman show, that woman must be able to carry the entire load.  Kelsie Huff is one such woman.  She carries that load of personal baggage and dumps it all at your feet with a loud thud.

Huff is the writer and director, as well as the only actor in Ranch Dressing and Other Coping Mechanisms (hereafter Ranch Dressing).  That makes sense, since she is the subject matter expert, the subject being herself.  She takes a deep dive into her childhood, her alcoholic family, and her life as a survivor of some pretty scary crises.

Huff’s script is a one hour monologue that starts with her locked in a ladies room, hiding away in a church basement.  Thus begins the sad saga of how Stephen Spielberg, using an oversized mechanical shark, traumatized her as a child.  Jaws never died; we only saw the alleged “chunks” of shark flesh, but not the carcass.  The 7 year old Kelsie Huff was convinced that Jaws lived in the plumbing at her house, and would attack her from the bowl below as she sat on the toilet.

The predatory marine killer trauma, though, isn’t enough.  Huff recounts a chaotic Christmas that ends in a fist fight between her father and Santa Claus.  Although it’s sometimes difficult to see the line between reality and artistic embellishment, Huff’s tales are much more the former than the latter.

Huff goes into a seemingly funny story of an all night bender that doesn’t end until she takes a bag lady to a liquor store at 5:00 AM.  The story then takes a disturbing turn.  She and her new bestie bust open a wine bottle (they didn’t have a corkscrew) in an American History X twist that, for me at least, generated an agonizing flashback.  If you haven’t seen the movie, you can see the scene Huff refers to here.

Fair warning, though: the scene is both barbaric and unforgettable.  You cannot “unsee” the brutality of American History X, and Ranch Dressing will take you to a very dark place with this reference.

It’s funnier when the American History X reference is to a wine bottle rather than a human being, but still, this is some very dark humor.  (For the record, the original scene in the film was not known for its comedic value.)  For Huff, dark humor is perhaps the only suitable kind, given the traumatic childhood she has survived.  That said, though, the humor isn’t really the point for Ranch Dressing.  It’s the message in Ranch Dressing that matters.

After immersing us in the alcohol haze of her escapades, Huff ends her show with a confession we are all familiar with:  “My name is Kelsie Huff, and I’m an alcoholic.”  We are not surprised to hear this, as Huff has been demonstrating it to us for nearly an hour at this point.  Even so, we need to hear it.  We need to know she is recovering and not spiraling into a cess pool filled with cheap vodka.

Huff’s Ranch Dressing is a tale of survival.  She survived a traumatic childhood.  She survived her own self destructive behavior as an adult.  She is now able to put herself out in front of anyone, anywhere, and tell her story.

Whether alcoholism is genetic is debatable, but we do know that children of alcoholics are four times more likely to have problems with alcohol.  Huff’s declaration is testimony to her determination to survive, and that is the central message of Ranch Dressing.  You can put ranch dressing on a pizza (“cream makes everything better”), but it’s still a pizza.  You can also put ranch dressing on alcoholism, but it’s still a self-destructive addiction.  It just tastes a little different.  The solution isn’t ranch dressing.  Surviving requires determination, persistence, and a lot of courage.

Huff confronts her demons, exposes her most intimate details, and does it in front of a room full of strangers.  How many of us would do the same?

The laugh lines do not hide her pain; the laughs are forced but the pain is real.  You will not see a more honest, more personal, more intimate display of courage on any stage.  Huff lets us into her life, partly for therapy, but more importantly in a hope that she may touch someone else.  Someone who needs the strength to battle his or her personal demons.

For that, Ms Huff, you get my praise and my thanks.

Ranch Dressing is an unusual piece of theater, combining stand up comedy with very dark personal experiences, and ending with a disarming and sincere personal confession.  Huff isn’t acting here.  This is all real for her.

An unusual piece of theater, and one that might actually change some lives.  For the better.  Which is exactly why we go to the theater.

There is ample free parking behind the theater (The Dairy Center), and on surrounding streets.  I am not sure what the parking situation is at the Buntport Theater.

There are adult themes and adult language in Ranch Dressing.  Discretion is advised for children under 15.

We stopped at Turley’s Kitchen, 2805 Pearl Street, Boulder.  It’s a bit of a Boulder landmark, and rightly so.  They serve breakfast all day; I had the #4 Combination Creation (3 pancakes, choice of meat, 2 eggs) for $9.00.  We had a very pleasant table on the patio, although the view of the parking lot is not inspiring.

Service was spotty.  My pancakes arrived with no syrup.  We had also ordered the house speciality, a large buttermilk biscuit, to split.  The biscuit did not show up either.  I reminded the waitress that I was expecting syrup and a biscuit, and told her that we did not have enough butter either.  She seemed surprised.  Perhaps pancakes in Boulder are eaten without butter & syrup, but I doubt it.  She promised to bring them right out; she didn’t.  Nearly 10 minutes later, the biscuit, butter and syrup arrived.  By then the pancakes were barely warm enough to melt the butter.  Incidentally, the butter is served in those tiny paper cups with folded sides, making it almost impossible to dislodge all the butter from the container.

It’s not like they were slammed with customers; there were many empty tables.  I’m not sure what the problem was, but we’re a little skeptical of returning when there are so many other options nearby.