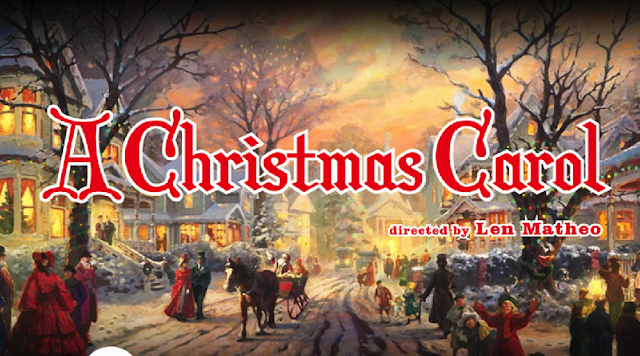 Adaption:  Josh Hartwell (based on the Charles Dickens novella).

If there’s a classic Christmas script for Colorado stages, Dicken’s A Christmas Carol is the hands down heavyweight champion.  There are a lot of good reasons for that, not the least of which is Scrooge’s transition from a miserly curmudgeon to a generous, charitable model citizen.  Dicken’s tale perfectly captures the seasonal tension between capitalism and altrusim.

Dicken’s tone is somewhat creepy and scary, but then it is, at it’s core, a ghost story.  His central character’s name, Scrooge, has become a derogatory term for misers.  As many times as we see A Christmas Carol, it is the rude, crude, cheapskate Scrooge we remember.  He is seldom remembered for his transformation to a generous patron to the poor.

I’ve seen many productions of A Christmas Carol.  Miner’s Alley Playhouse’s version is unique in my experience.  Josh Hartwell’s adaption is a full fledged embrace of the Dickens story, but enhanced with a clever "play within a play twist."  Hartwell and director Len Matheo inject humor into the characters, giving Dicken’s message a much warmer delivery.

Hartwell opens his story with a spirited discussion of which story is more “Christmassy:”  A Christmas Carol or Dylan Thomas’ A Child’s Christmas in Wales?  With the family gathered around him, Jim Hunt has just finished reading the Thomas work.  Despite his unwavering support of Thomas’ prose, Hunt is reluctantly convinced to follow the Thomas reading with a dickens of A Christmas Carol.

The effect is important.  We first see Hunt as a gentle, thoughtful patriarch…before we see him as Scrooge.  Our first impression of Hunt tempers our later impression of Scrooge.  We see him not so much as a villain, but as a misguided soul hiding a gentle heart.  Hunt doesn’t hold back as Scrooge, but we are always aware that he’s just playing a role in the play within the play.  We know he’s not really a scrooge.

Even when he’s sticking closely to Dicken’s script, director Len Matheo manages to take much of the creepiness out of the ghost story.  Matheo uses physical comedy (it’s a REALLY big turkey), eye popping costumes and appropriate overacting to make the story more accessible and entertaining.  This is A Christmas Carol that the whole family will enjoy.

If you've seen A Christmas Carol, you may remember the dance scene.  It’s the one where the young Scrooge waltzes with Belle.  He’s not yet the cynical, mean miser he will eventually become.  Matheo’s touch is as tender as I’ve seen in any production of A Christmas Carol.  Josh Hartwell and Lisa DeCaro float across the stages, eyes locked.  They convey the blossoming of their love for each other with every step, every glance, and every touch.  The scene is beautifully staged by two gifted actors and a laser focused director.

The entire cast plays multiple roles, sliding seamlessly between their various characters.  Meredith Young is resplendent as Christmas Past in a glitter encrusted costume.  Lisa DeCaro’s Christmas Present could well be mistaken for a Christmas “present.”  She glides across the stage like a legless ghost.  Jason Maxwell is a show stopper in drag as Martha.  Ella Matheo’s debut as Tiny Tim was flawless and promising.  She’s ready for bigger roles.

Jonathan Scott-McKean’s set is detailed and functional.  Except for a somewhat awkward bed/table piece, it all works.  Elizabeth Scott-McKean’s costumes are all imaginative, but the ghost costumes are especially splendid.   In addition to the above mentioned waltz, Angie Simmons choreographs the cast through a toe tapping Irish jig.

A Christmas Carol at Miner’s Alley Playhouse is a fresh take on a timeless classic.  It respects Dickens' message but updates it with a new and entertaining tone.  You may leave the theater remembering the generous Scrooge instead of his anti-social alter ego.  If this show doesn’t put you in the Christmas spirit, well, “Bah.” “Humbug.”  You probably won’t be getting much under your Christmas tree this year.

For those interested in the Charles Dickens backstory on A Christmas Carol, check out a new film on the subject:  The Man Who Invented Christmas.  I can’t vouch for the historical accuracy of the film, but accuracy aside, it looks entertaining.

When asked for a Christmas donation for the poor, Scrooge has a predictably cold reply:

'Are there no prisons?' asked Scrooge.

'Plenty of prisons,' said the gentleman, laying down the pen again.

'And the Union workhouses?' demanded Scrooge. 'Are they still in operation?'

'They are. Still,' returned the gentleman, 'I wish I could say they were not.'

Still today, misers who value only the wealth they can accumulate disparage and demonize the less fortunate .  The comparison, though, is perhaps apples and oranges.  Scrooge had the capacity for redemption.

This is not the first time I’ve seen an exquisite dance scene involving Josh Hartwell.  He knows what he’s doing on the dance floor.

Posted by Bill Wheeler at 2:31 PM No comments: Links to this post