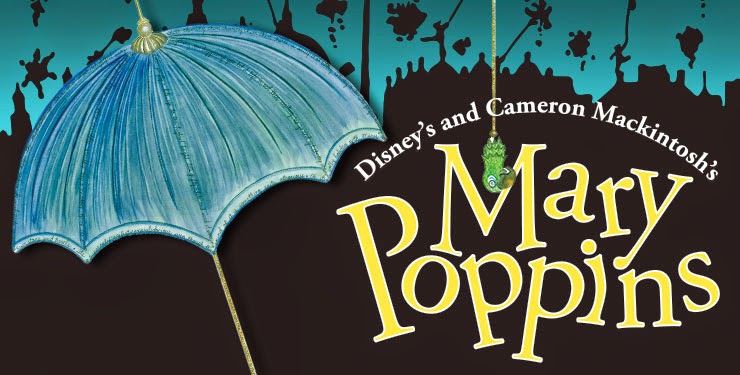 You probably already know some of the music:
Supercalifragilisticexpialidocious.
A Spoonful of Sugar.
Chim Chim Cher-ee.
If you've seen the film, you can't forget the songs.  If you haven't seen the stage version, here's your chance...don't waste it.
Mary Poppins is a musical we have probably all encountered in some small way since the Julie Andrews/Dick Van Dyke film version in 1964.  That film garnered 13 Academy Award Nominations (still the most ever for any film), and won 5, including Best Actress for Andrews.  More importantly, the film won the hearts and minds of millions of fans worldwide.
Colorado Springs is no exception; the fans seem to be legion.  The Fine Arts Center run has been breaking attendance records, and has been extended by one week.  It is now scheduled to close on January,11, 2015, but even with the extension, you may not be able to get a ticket.  It's easy to see why.  Mary Poppins is a marvelous musical, with catchy tunes, colorful characters, and a charm that works magic on kids of all ages.
The Fine Arts Center (FAC) production is a rare gem in a resume full of winners.  The FAC has put it all together here, starting with Erik D. Diaz' beautiful set that serves as both exteriors and interiors, and includes a bedroom, a parlor, a park, a bank, and a London street.  The music, under the careful and skillful direction of Jay Hahn, is a flawless sound track for the talented actors, singers, and dancers who bring the fantasy to life before our eyes.
Mary Poppins (Jennifer DeDominici) is no easy role, and it's not made any easier playing against two charming and very talented kids:  Mallory Hybl (Jane Banks) and Nate Patrick Siebert (Michael Banks).  Hybl and Siebert hit every mark, deliver every line, and dance like pros, all while appearing to totally enjoy every minute they are on stage.  At the outset, they are a pair of spoiled brats, throwing nanny after nanny under the bus.  What kid wouldn't totally enjoy THAT role?  They are challenged, though, to act their way through a transition from hellions to darlings. It turns out that they are just as convincing and charming in either role, which is no small acting feat.
DeDominici has a voice like a song bird; she lights up the stage with each of the three hits mentioned above and a number of lesser known tunes like Practically Perfect and Feed the Birds.  DeDominici wins over the kids and the adults alike with her singing, dancing, flying, and charisma, always the nanny, teacher, and role model for her Jane and Michael.
Mary Poppins at FAC is a family show in more ways than one; Sally Hybl (Winifred Banks) is Mallory's mother, both onstage and offstage.  That probably accounts for a good deal of the chemistry between the two; they don't have to act like mother and daughter.  They are mother and daughter.  The senior Hybl is an arresting Winifred; she may have the strongest voice in a cast of approximately 25 including the ensemble.  When she sings, you can't help but cherish every note.
Kevin Pierce (Bert) is Mary Poppins' platonic male friend, and also the narrator when needed.  Pierce makes a dashing chimney sweep; his turn on the rooftop in Act 2 is one of the most memorable of the show.
Tom Auclair (George Banks) is the onstage father to the young punks, and he's great as a tough, rules oriented, but altogether remote parent.  His onstage transformation, though, is a joy to watch.  He's a banker who learns to reward good people instead of good profits, which spills over into his parenting skills.
Director Scott RC Levy has done yeoman's work here, managing a huge cast, multiple moving set pieces, a magic, bottomless carpetbag, an excellent orchestra, and a seemingly endless script, all to wondrous effect.  (With one caveat:  at just over 3 hours, even the cushy FAC seats test even the most patient in the audience).  Choreographer Mary Ripper Baker makes even the tap dancers look and sound spectacular.  Lex Liang's costumes are colorful and fun, mixing well with Jonathan Eberhardt's hair designs for a great period look.  It's also worth noting that the FAC has wisely spent the money to bring in ZFX to help Mary Poppins fly; it's always a wise decision to put the actors' safety in the hands of professionals.
There's a lot to like at the FAC production of Mary Poppins.  If your credit card is nearing its limit with Christmas shopping, fear not.  Invest whatever credit you have left in tickets to Mary Poppins for the family.  It will be one of the best gifts they get this holiday season.
In fact, it's so good that I can't resist borrowing the superlative invented just for Mary Poppins:  this show is
Supercalifragilisticexpialidocious!
And that says it all.

NOTES:
Mary Poppins is suitable for all ages.  For younger kids, prepare them in advance.  At just over three hours, Mary Poppins is a challenge for adults.  Kids have a somewhat shorter attention span.
There is free parking on the streets around the theater.
This show closes on January 11, 2015.

Pre or post show dining suggestion:
Phantom Canyon Brewing Company at 2 E. Pikes Peak Avenue, is a short, five minute drive to or from the theater.  It's a microbrewery, with an impressive list of handcrafted beers.  The menu includes Bison burgers as well as ground beef, and entrees from fish & chips to Grilled Scottish Salmon.  Happy hour is 3-6:00 PM and 10 PM to close, featuring pints for $2.75 and $3.00 house wines.  Be prepared, though.  It can be busy at peak times, and on street parking is metered but hard to find.
Photo Credits: Colorado Springs Fine Arts Center, unless credited otherwise.
Tickets HERE.