It was with some trepidation that I sat in the crowded theater waiting for the curtain to go up for Rabbit Hole.  The brief summary of the story was enough to give me pause:

“Becca and Howie Corbett have everything a family could want, until a life-shattering accident turns their world upside down and leaves the couple drifting perilously apart. RABBIT HOLE charts their bittersweet search for comfort in the darkest of places and for a path that will lead them back into the light of day.”

You don’t have to be a rocket scientist to realize that this story is about the loss of a loved one.  It’s not that long ago that I personally experienced such a loss (see Notes below).  Three years later, I am still careful to avoid shows that may take me back to my darkest days.

Despite my concerns, Rabbit Hole turned out to be poignant and comforting rather than disturbing.  David Lindsay-Abaire’s script is one part tragedy, one part humor, and two parts hope.  It's the double parts of hope that creates a lasting impact.  Lindsay-Abaire is direct and honest; Rabbit Hole is an uncompromising tragedy. But Rabbit Hole is such a compelling story because, despite the tragedy, he lights up an otherwise very dark tunnel with a realistic hope for recovery.

Becca (Haley Johnson) is the character most traumatized by her loss; everything has changed for the worse for her.  Johnson is not just depressed.  She is also angry and takes out her frustrations on her husband Howie (Mark Stith) and her mother Nat (Deborah Persoff).  Johnson walks a dramatic tight rope.  She plumbs the depth of her loss by approaching irrationality but without actually crossing over into it.  We sympathize with her, even as she victimizes those who are reaching out to her.  It’s a striking performance by an actor who never holds back.

Mark Stith is so emotionally engaged in his role that he cries actual tears onstage.  That is not just unusual; it’s also very powerful.  Men rarely shed tears, even in an emotional crisis.  Stith gives men in the audience permission to cry in a crisis.  If that were the only takeaway from his performance, it would be more than enough.  Stith, however, goes further.  He exemplifies the courage and persistence one needs to be a caregiver while needing care himself.  Stith’s Howie is the strongest of men; he cares about and for Becca while suffering in relative silence.  His performance will stay with me for a long time.

Izzy (Maggie Stacy) is Becca’s sister, and Stacy nailed her from the moment she walked on the stage.  She’s sassy, she’s naughty, and she’s unapologetic for breaking all the rules.  Stacy takes Izzy to the limit, bringing humor and perspective to the rest of the characters.  Few women get in bar fights; Izzy, of course does and floors her opponent.  Maggie Stacy convinces us that while it's unusual, she really had no choice.  She’s a veteran actor with a polished resume, but Izzy may be her best role yet.

Nat (Deborah Persoff) is a compelling mother to Becca, equal parts loving and annoying.  She really wants to help Becca out of her funk, but Persoff demonstrates vividly why she’s so poorly equipped to advise anyone on grief.  Her terse comments about the Kennedy family are a dismal, pitiful attempt to comfort the grieving Becca.  Persoff has a maternal love for Becca, but a simultaneous and profound emotional disconnect that thwarts her good intentions.

Director Bernie Cardell wrings the maximum effect out of both the tragedy and the hope that Lindsay-Abaire has baked into this marvelous script.  Cardell insists that the details be correct; when the cast sits down to celebrate a birthday, it’s with a real cake and real candles.  Set designer Douglas Clarke also covers every detail; the fully stocked refrigerator has a working light when the door opens.

There’s not a wasted moment or a flaw of any kind in this production.  It’s honest.  It’s powerful.  It’s profound.  Rabbit Hole is that rare combination of a brilliant script, a meaningful message, inspired performances, and technical excellence.

Grief is universal; we will all experience it sooner or later.  Grieving, however, is both universal and personal.  We must all find our own path through the darkness.  Rabbit Hole shows that we can do both:  grieve and recover.  Grief is the end to one reality and the beginning of a new one.  If you’re having trouble dealing with your new reality, Rabbit Hole may be just the medicine you need to help you get through the darkness.

This show is suitable for teens and up.  There is free but limited street parking and additional free parking on the north and south sides of the theater.

Discretion is advised for adults who have suffered the loss of a child.  Some scenes may be difficult for those still grieving that loss.

This post avoids a detailed description of the plot of Rabbit Hole.  That’s deliberate; it’s difficult to go into details without spoiling the story for those who haven’t already seen it.

Full disclosure:  While I haven’t lost a child, I did lose my wife, Linda Rae Wheeler, in 2013.  The grief still seems fresh, and Rabbit Hole brought it back to the surface.  Watching a loved one die a long and painful death is traumatic, but I do not think my lingering grief has affected this review. 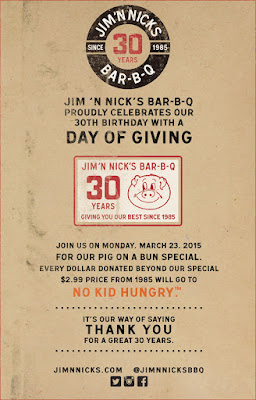 We had enough time before the show to have dinner at one of our north side favorites, Jim N’ Nick’s Community Bar BQ in the Northfield Shopping Center (8264 E 49th Ave, Denver).  This is southern cooking for carnivores, with a side of community service.  They will bring you a basket of cheese biscuits while you read the menu.  I could make a meal out of those biscuits.

This is the second time we’ve been seated at a table at Jim N’ Nick’s and were quickly greeted by one of the staff:  Chef Dion Williams.  Williams spends as much time in the dining room as he does in the kitchen.  We mentioned that we had spoken to him the last time we were there, and he immediately thanked us for coming back and comped an appetizer for us.

Williams brought up his special for the night:  Barbecued Prime Rib.  It’s not on the menu, but it’s available on Friday and Saturday nights.  He called it “ meat candy.”  I ordered it and I agree.  It’s meat candy.

If you see a tall African American guy walking around Jim N’ Nick’s talking to customers, that’s probably Dion.  Say hi to him.  He’s from Alabama, and he’s the real thing.  He knows how to treat customers, and he loves to meet them.  He’s a chef who sets a professional example for his kitchen, and works the entire restaurant to make sure everyone goes home happy.