The Ghosts of Us 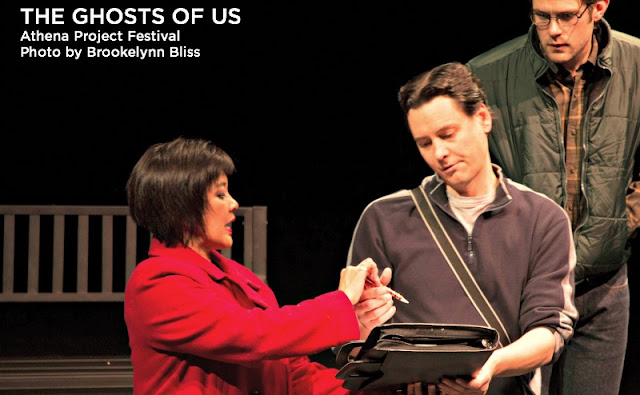 The set up for Ghosts of Us is intriguing.  Four people spend 36 hours together in a cabin in the Rockies.  The purpose:  to comply with a prenuptial agreement between Emma (Regina Steffen) and Jackson (Kevin Lowry).  Before divorcing, the couple is required to meet and speak to each other (civilly, of course) about their past and future.  Jackson brings along a witness, Aiden (Benjamin Cowhick); Emma brings her attorney sister Sophia (Arlene Rapal).

It turns out, however, that the breakup is not the main attraction in the cabin.  While Jackson and Emma deal with their mutual distrust and lost love, Sophia and Aiden are there to forge new loves:  Sophia with Jackson and Aiden with Emma.  Both have long harbored feelings that can finally materialize as the relationship between Emma and Jackson disintegrates.

This is an emotional (as opposed to a sexual) love rectangle.  It has four sides, and it is inherently unstable.

This premise is promising, and the characters go through some interesting antics making both the budding and the dying relationships real.  The tension between Lowry and Steffen is palpable; they are anxious to get through the weekend and finalize the breakup.  It’s not that they hate each other.  They don’t.  Like a lot of relationships, theirs died by a thousand cuts, none of which would be fatal by itself.  Rather, the cumulative effect of numerous small daily compromises dooms their marriage.

Aiden and Sophia are not neutral bystanders; both hope to forge new relationships from the ashes of the marriage.  Cowhick is a brooding, moody, shy Aiden; he has not recovered from his last relationship disaster that ended more than a year ago.  Rapel’s Sophia is a self confident, accomplished woman who takes what she wants, and that’s Jackson.

The production is first class; Director Melissa McCarl has a talented cast that she has delicately coached to arouse the emotions of both budding relationships.  Katie Gruenhagen’s set design is functional and fully evokes the charm of a mountain cabin.

Since this production is part of Athena Project, I’m going to deviate somewhat from my routine and address Rebecca Gorman O’Neill’s script in some detail.  O’Neill won the Athena new play award in 2015, and as a result got this full production in 2016. For that reason, I am issuing an official SPOILER ALERT.  Addressing the script requires revealing some details that I would otherwise avoid.

Read on only if you don’t mind me spoiling the plot for Ghosts of Us.

The premise, described above, is excellent, and offers the playwright many options for telling a compelling story.  O’Neill has capably used her premise to tell such a story, but for some reason veers off the rails at the conclusion.

I think there are two reasons why Ghosts of Us left me unsatisfied:

1.  The script has some subtle references to The Seagull by Anton Chekov.  Ghosts of Us takes place near a lake.  Aiden wants to shoot a duck for Emma.  Ghosts of Us ends with a sudden gunshot offstage.  These elements are loosely drawn from The Seagull, but have little to do with the four sided relationship issues we care about.

2.  This is the spoiler.  Aiden commits suicide in the final scene when he realizes that he will never be with Emma.  It’s an abrupt, disconnected event.  The effect is to shift the focus from a broken marriage to a broken man in the last moments of the show.  I’m not fond of finding out what a play is about in the last minute of the performance.  It makes me feel like the preceding 1 hour and 59 minutes were a waste of my time.

Ironically, these two issues could be fixed with just a few adjustments.  The Chekov references are more confounding than apt.  Ghosts of Us does not need Chekov to be an interesting script.  Whether Aiden shoots a duck for Emma is a distraction; he’s a very sympathetic character with or without a dead duck.

As for the misdirection at the end, I can’t help but feel that that other three characters were left in the lurch (as was the audience), despite the richness of the story about them.

Aiden’s dramatic suicide is too unexpected.  Perhaps a final scene one year, or five years later would be an improvement.  Tell me what happens to these four characters after the weekend is over and some time has passed.  Perhaps Aiden is still a suicide victim, but his decision might be more deliberate than impulsive.  Have Emma, Sophia and Jackson moved on? Are they happy with the changes in their lives?  Finish the story we have started.  It’s a compelling, intelligent story that audiences care about.

Ghosts of Us has a lot of promise.  With some tweaks, it will be able to keep that promise.

Parking can be difficult on the DU campus.  Athena Project is your friend for parking.  Read this:

Any tickets purchased in advance will include parking in The Newman Center parking garage is located 1 block south of the Newman Center (University & Wesley.)  If you do not pre-purchase you may be subject to special event parking fees depending on other events in the complex.  These fees range from $8-$20.  Street parking is available in the neighborhoods but beware of street parking needing permits.

Each play will get 2 workshop readings. Workshop level productions are designed with minimum sets, lights, sound, etc. and they also allow for an audience to give feedback. One play will be selected from this Series to be produced in the Athena Project Festival in March of 2017.