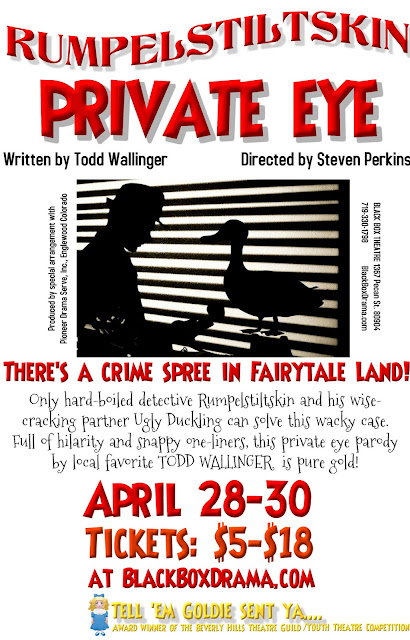 Perhaps the best way to insure the future of live theater is to engage kids at an early age.  There is an entire genre of “children’s theater” that does exactly that.  Not only does children’s theater give kids a sense of the magic that is live theater, but it also inspires some to dream of standing on a stage some day, bowing to thundering applause.

Colorado Springs playwright Todd Wallinger specializes in theater for young people, and his script for Rumplestiltskin, Private Eye (hereafter Rumplestiltskin) is one of his most successful works.  Targeted at middle school aged kids, Rumplestiltskin has also been a hit with elementary school audiences.  Wallinger’s script won the Julie Harris Award in 2014 at the Beverly Hills Youth Theatre Guild competition.

Rumplestiltskin opened on April 28 to a packed house at the Black Box Theatre, and the audience (with ages ranging from elementary school to, ahem, 68 years old) loved it.  Rumplestiltskin takes a character from central casting and puts him in a new role.  The kids were totally engaged, following the action and the story with a laser beam focus.  It was obvious; there was appropriate laughter, appropriate surprise, and no fidgeting for the entire 90 minute performance.

Children’s theater requires straight forward story telling, and Wallinger’s Rumplestiltskin does exactly that.  Wallinger weaves stories they already know (Snow White, The Ugly Duckling, The Three Little Pigs, Little Red Riding Hood, and others) into a brand new story.  Using these universal children’s stories as a primary plot ingredient lets Wallinger connect quickly with his audience.  They know and love the stories, and they can’t wait to see how their favorite fairy tale characters play out on stage.

Rumplestiltskin has a huge cast (29 actors by my count) and the Black Box is a small stage.  The logistics of entrances, exits, and scene changes are daunting, but director Steve Perkins makes it all work seamlessly.  Perkins also has a keen sense of how to do children’s theater, prompting his actors to exaggerate and overact in ways that mirror classic children’s behavior.

There are some standout performances (which is not easy when one is competing with 28 other actors) on the Black Box stage, not the least of which is Alicia Franks as the Ugly Duckling (“I’m a SWAN!“).  I’ve seen Ms. Franks as a dog, and she’s just as much fun as a fowl.  “Frankly,” Alicia owns the stage here as Rumplestiltskin’s flighty but focused sidekick.  Brand Davis-McCluskey (Rumplestiltskin) has his hands full in this plot, tracking down the bad guys.  He bumbles through the clues, and wouldn’t be able to solve this caper without his Ugly Duckling.  Or, as she prefers, she’s a SWAN.

Matt Brady takes a small part (Gloomy the dwarf) and totally nails his role.  His monotone, baritone delivery is perfect for Gloomy.  Paul Stewart III does the same with his tiny part (the Gingerbread Man), slipping and sliding across the stage as if gravity doesn’t exist.  The youngest actor on the stage is fifth grader Destiny Labride (LIttle Red), and she holds her own with the adults.  If any kids in the audience were inspired to follow in someone’s footsteps, those footsteps were Destiny’s.

Wallinger’s script has something for everyone.  The kids connect to the fairy tale characters and the constant physical comedy.  Adults get a big dose of puns.  Everyone has a good time, and the good guys win in the end.  It doesn’t get any better than that.

Wait.  It may in fact get better than that.  Mr. Wallinger may look back on Rumplestiltskin in 5, 10, or 20 years and realize that someone in that audience has eclipsed him in the world of theater.  Inspiring a new generation of theater artists is infinitely more rewarding than a happy ending for the Rumplestiltskin script.  In fact, it truly does NOT get any better than that.  I hope the possibility of such an outcome brings some hope and joy to Mr. Wallinger.

This show is suitable for all ages.  There is ample free parking on Pecan Street in and around the theater.

There is some important information included in the Rumplestiltskin program:

Sadly, Black Box closes its doors on May 31st, 2016. We have loved every moment here.

(Well, maybe not the moment when an ill patron threw up on the floor, or all the
many moments the toilets flooded. Ah, memories!)

We will remember you, dear audience, as we hope you remember us.  Many of us will be continuing in theatre locally, and we hope you will look for us on - and behind - the stage. Without you, we couldn't do what we do.

Black Box will be missed.  Their slogan is “Theater with Integrity.”  They have delivered on that slogan every time I was in the house.

Not So Smart Pig:  Kiffin Irwin