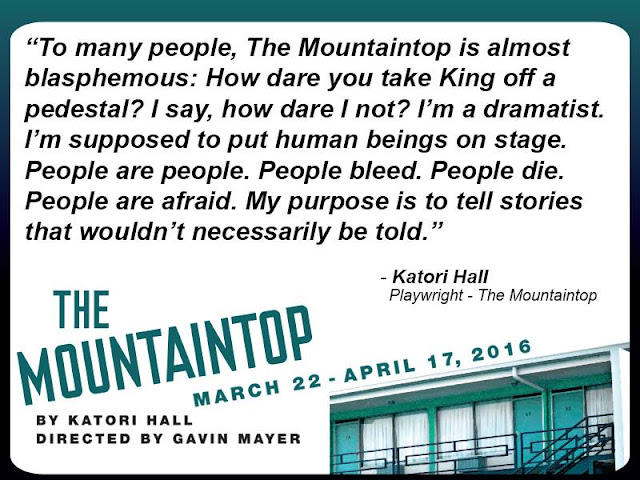 At the outset, it’s important to note that The Mountaintop is historical fiction; that is, fiction based on historical events.  Katori Hall’s script is her speculation about what may have happened at the Lorraine Motel on April 3, 1968, the night before Dr. Martin Luther King Jr. was assassinated.

It is no coincidence that The Arvada Center for the Arts and Humanities has skillfully brought Dr. King back to life on their stage for the 48th anniversary of his death. The Mountaintop is named for the speech Dr. King gave on April 3, 1968 at the Mason Temple (Church of God in Christ Headquarters), Memphis, Tennessee.  His last words to the public were prophetic:

“Like anybody, I would like to live a long life. Longevity has its place. But I'm not concerned about that now. I just want to do God's will.  And He's allowed me to go up to the mountain. And I've looked over.  And I've seen the Promised Land.  I may not get there with you. But I want you to know tonight, that we, as a people, will get to the promised land!”

As I write this, my thoughts are going back 48 years to the events in Memphis at the Lorraine Motel.  The pain of that loss is still heavy on my heart.

As The Mountaintop opens, we are in his room (306) at the Lorraine Motel, shortly after he delivered his speech.  He’s tired, needs a cigarette, and sends his colleague (Ralph Abernathy) to find some Pall Malls.  He’s annoyed; he calls the front desk but learns that the Lorraine has discontinued room service.  They send up a maid named Camae (Betty Hart) with coffee until Abernathy can return with the smokes.

Hall’s script then deviates from history, imagining what happens that last night of King’s life.  The result is at once creative, imaginative, and revealing.  She carefully shows us King’s flaws and fears.  Yes, King is preacher, an activist, and a powerful leader.  But before he’s any of those things, he’s a man.  Just a man.

King (Cedric Mays) has some secrets, some of which are the subject of an FBI investigation, and he’s a reluctant leader.  He knows his work is dangerous, and he fears he will a soft target for his critics.  He  has faced his mortality before, and he spoke of it on April 3:

Before I knew it I had been stabbed by this demented woman. I was rushed to Harlem Hospital. It was a dark Saturday afternoon. And that blade had gone through, and the X-rays revealed that the tip of the blade was on the edge of my aorta, the main artery.

And once that's punctured, your drowned in your own blood -- that's the end of you.

Cedric Mays is not afraid to take on a role that is literally historic.  Playing Dr. Martin Luther King Jr. is risky; if you do not do the man justice, it could be a colossal career killer.  Cedric Mays, however, is fearless, and his portrayal is true to both the man and the myth.  When he breaks into King’s oratorical delivery, he replicates King’s timber and cadence.  The effect is arresting; he becomes King for The Mountaintop.

Betty Hart is sassy, saucy, and a proud Camae; she may be a maid but she’s not a servant to anyone.  Camae has a street quality; she can’t help dropping F bombs on the Reverend.  Hart does it with conviction before remembering who she’s talking to; her apologies are as sincere as they are ineffective.  I can’t help but think that her character is probably somewhat autobiographical; Katori Hall may have modeled Camae after herself.

There is one point in the performance where Hall inserts a barely credible plot twist.  It’s jarring, unexpected, and yet entirely consistent with King’s life and his imminent death.  Saying more here would spoil the story, and I won’t do that.  I will, however, advise those who venture to The Mountaintop to suspend reality and accept this abrupt plot twist.  You’ll be glad you did.

Hall’s story is as spiritual as King was.  Her approach to King’s last night on earth is exactly what a man of the cloth would expect.  She forces King to accept the inevitable consequences of being “just a man,” as we all must.

This Arvada Center production is outstanding.  Grant Evenson’s sound design goes seamlessly from a whisper to a roar.  He repeatedly creates rolling thunder that seems so close that one wonders if lightning has hit the stage.  His soundtrack for the climax is breathtaking.  Seth Alison’s lighting design is capable and functional until that climax, at which time it becomes part of a 360 degree multimedia explosion.

Brian Mallgrave’s scenic design is a beautiful replica of room 306 at the Lorraine Motel, and for the climactic scene, he transforms the stage into a supernatural setting that explodes with colors, lights, and sound.  The effect is stunning; Mallgrave somehow always finds a way to surprise us with his sets.  Jacob Kenworthy and Brian Mallgrave combine their talents on video projections to create a powerful and transformative climax.  They somehow give King and the audience a glimpse of the “promised land." It’s a frenetic, fantastic and immersive vision of the "promised land," and you will not soon forget it.

Director Gavin Mayer pulls out all the stops with The Mountaintop; the climax is a fitting immersive feast for the senses that pulls the threads of the story together.  Working with a great script, a marvelous cast, and the Arvada Center technical staff, Mayer tells a an unforgettable story that respects both King's humility and Katori's vision.


The Mountaintop is fiction, but both the fiction and the history belongs to all of us.  Many of us bought into the myth to some extent, holding our hero(s) to an impossibly high standard.  Having feet of clay may tarnish a reputation, but it does not diminish the real accomplishments of a man like King.  He made a difference in a world that desperately needed change.  That so much change was generated by “just a man” merely makes those changes more remarkable.  As The Mountaintop reminds us, we are all capable of greatness despite our failures.

This show is suitable for teens and up.  There is ample free street parking at The Arvada Center for the Arts and Humanities.

I will just note that in a theater with more than 200 seats, few were empty on a weeknight.  None of those seats, as far as I could tell, was occupied by an African American.

Full disclosure.  I’m old enough to remember King’s assassination.  It was the second in my experience (JFK being the first), and the cumulative effect was emotionally and physically disturbing to me.  In July of 2009, my late wife Linda and I visited the Lorraine Motel, which is now the site of the National Civil Rights Museum.  Having stood in that spot, looking into room 306, The Mountaintop brought back some painful memories from 1968 and from 2009.  While the memories are difficult, I am very grateful to the Arvada Center and to Katori Hall for the experience.

We must remember those who came before us and did the dangerous work to make things better for all of us.