Marsha Norman is getting a bounce on the front range; her 1983 ’Night Mother has had two successful revivals here recently. (Reviewed here and here.)  Both recent productions were powerful displays of Norman’s gift for portraying real people in desperate situations.

Getting Out, now playing through April 3 at The Edge Theatre in Lakewood, is one of Norman’s earliest plays, opening in October, 1978.  Arlene (Missy Moore) has just been “rehabilitated” and released from prison.  Like most released convicts, she goes home to an environment that is as unchanged and toxic as it was when she left it after her conviction for murder.

The script is gritty; Arlene’s good intentions to turn her life around are thwarted at every turn by the sketchy characters and her advanced state of destitution.  At some level, we all realize that Arlene’s dilemma is real, but Norman’s script has an “in your face” intensity that turns the theoretical dilemma into a bleak reality.

In other words, Getting Out is similar to ‘Night Mother in at least one important aspect:  it is painfully difficult to watch.  One cannot idly sit by and witness the soul crushing reality of Arlene’s life without cringing.

Missy Moore is perhaps the perfect actress to play Arlene; she has the emotional strength and the physical stamina to draw us into Arlene’s world.  Moore has an arresting “deer in the headlights” expression, simultaneously stunned and motionless.  She endures two physical assaults in every performance, conveying both her fear and her pain in convincing detail.  Arlene is a complex and tortured character, and Moore turns in a brutally truthful, transcendent performance.

Moore’s alter ego, Arlie Girl (Xandra Prestia-Turner), is her younger, criminal wild child self.  It’s difficult to imagine a wilder child than Prestia-Turner; her guards are flummoxed by her temper tantrums and volatility.  (With the exception of Bennie, played by Robert Michael Sanders, but more on him below.)  Early in the first act, she demonstrates what a bag of frogs sounds like.  You’ve been warned.  Prestia-Turner is locked in, giving us a scary if accurate picture of who the young Arlene really was.

As for Mr. Sanders, his Bennie is truly a paradox.  While he appears to be the only person Arlene can trust, he has a very dark side.  His dual personality turns on Arlene in the worst possible way.  Sanders delivers his schizophrenic character beautifully, going from the nicest guy on stage to the nastiest in the blink of an eye.  It’s an abrupt transition, made credible by Sander’s physical and emotional presence.

Kent Randell (Carl) tries to lure Arlene back into his hooker harem with promises of easy money and only four customers a day.  Randell is a stereotypical pimp, dressed in a suitably outrageous pimp get up (hat tip to Nicole Harrison’s costumes).  He plays both pimp roles; he’s smoothly persuasive until he needs brute force to make his point.  Randell is evil all dressed up for a night on the town, and Arlene senses that he’s also a one way ticket back to the slammer.

Ruby (Kelly Uhlenhopp) is Arlene’s only hope, but it’s a slim one at that.  Uhlenhopp treats Arlene like a human being.  That matters.  Arlene has a criminal record, no apparent life skills, and lacks the funds to buy her groceries.  That Ruby would give her the time of day is significant; that she extends a helping hand is crucial.  Uhlenhopp is the only source of hope for Arlene, and indeed, for the audience.  When Ms Uhlenhopp smiles and speaks, it’s with a sincerity and honesty that brightens Arlene’s bleak existence.

Director Rick Yaconis delivers a well oiled performance here, with a talented cast and a passion for the script.  At times, that passion plays out as violence and at times as screaming and screeching.  Both are necessary if painful elements of Getting Out.  Justin Lane’s scenic design is both realistic and symbolic.  Both the first level kitchen and the second level prison are first rate realistic renditions.  Symbolically, both are extensions of the other.  The line between inside the prison and outside the prison disappear; in reality, both are prisons.  Fight Choreographer Seth Maisel has two duties:  1) to put on realistic conflicts, and 2) to never put the actors in harm’s way.  He does both exceedingly well.  It was all I could do to resist intervening in the conflicts playing out a few feet from my seat.

Getting Out is a brutal indictment of the victimization of inmates and parolees.  It’s very difficult to watch, and even harder to forget.  Arlene has been successfully rehabilitated, which entitles her to make a choice between crushing poverty or selling herself daily to the highest bidder.  That's an absurd choice; she did her time and paid in full for her crime.

That said, I found the script extremely harsh with the male characters.  There's not a decent one in the entire cast.  Whether pimps, guards, or rapists, the Getting Out guys are a sorry lot.  That may be an accurate portrayal of males in Marsha Norman's experience, but it is quite at odds with my own experience.  A token decent guy would add a bit of reality to the Getting Out experience.

Economic inequality is not just a campaign issue (although it certainly is that).  It’s an economic reality.  I suspect each and every one of us can easily name some hard working friends or relatives who can barely make ends meet.  The notion that hard work results in upward mobility is more myth than fact; nearly all those who move up work hard, but only a small fraction of the hard working move up.   Arlene’s situation is not unique, but you don’t have to be an ex con to join the working poor.  If you have a limited education and/or limited job skills, your upward mobility opportunities are extremely rare.  You may work hard for a lifetime without rising out of poverty.

We used to be the “land of opportunity.”  Recent research shows that upward mobility in the U.S. is not nearly as good as in other developed countries.  Getting Out is not proof of the problem, but a graphic demonstration of the barriers.   One need look no further than the talented and hard working members of the Colorado theater community for that proof.  Given the economic realities, Arlene is not the only one for whom Getting Out of poverty is nearly impossible.

This show is suitable for adults and older teens. There is strong language and some intense situations.

There is ample parking at The Edge Theatre.  Do not be concerned about police vehicles that may be parked in the same area.

We left Colorado Springs early for the 8:00 PM curtain at The Edge.  It’s March Madness, and Roxie is a BIG KU (Kansas University) fan.  They had a 6:00 PM game she wanted to see, so we headed for Old Chicago at 145 Union in Lakewood before the show. 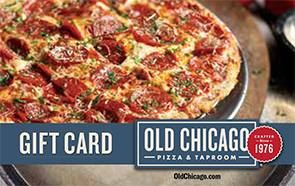 Dinner was Irish Nachos (corned beef on kettle chips with queso) and Double Deckeroni pizza…a decidedly rational order given that Old Chicago is a sports bar.  Our server, Tawny, was extremely vigilant, making sure we had everything we needed without being intrusive.  The food was fine, and the Jayhawks won the game.  Needless to say, we’d do it all again…