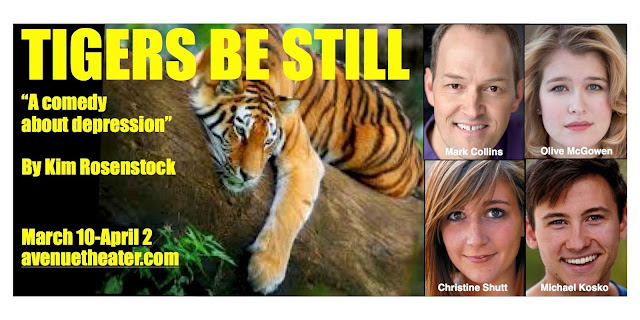 From the moment Olive McGowen (as Sherry, the newly minted art therapist) opens the show, she is a vibrant, perky presence who drives the Tigers Be Still story.  She got spontaneous applause before she spoke her first line. How does that even happen?  You have to see it to get it. McGowen charmed the crowd from the outset, telling the story of her sister and mother’s paralyzing depression.

Sherry herself was also depressed, but dragged herself out of bed and got her first job out of college.  Principal Joseph Moore (Mark Collins) offered her an art teacher position, and a chance to practice her academic focus:  art therapy.  (I had never heard of “art therapy.”  It turns out it’s not a dramatic device; there actually is such a thing.)  Her client is the principal’s son Zack (Michael Kosko), an angry slacker who can’t hold a job.

As for the tigers in the title, the plot includes one escaped tiger whose real and symbolic presence creates a sense of danger for the cast.  Playwright Kim Rosenstock is not the only writer to use a wild tiger in a script.  There is no question that a tiger injects a subconscious fear of an unexpected attack and a gruesome death.  Whether it is a necessary plot element for Tigers Be Still though is debatable.

This is a script overloaded with issues:  depression, grief, loss, guilt, the meaning of family and love, to name a few.  Any one of these issues would be sufficient for a one act script; lumped together in a single act requires under developing some of them (the tiger being a good example).   Rosenstock leaves the audience with a lot of loose ends, including “what ever happened to the tiger?”  It turns out to be the least urgent problem the cast is facing.

Tigers Be Still is described as a “comedy about depression.”  (See the banner at the top of this post.)  As one might expect, the laughs are somewhat stifled, given the subject matter.  Depression is hardly a laughing matter for anyone who has experienced it, personally or through friends or family.  Your reticence to smile or laugh is justified.

Script issues aside, this is a dynamite production powered by Ms. McGowen.  She’s the center of the Tigers Be Still universe; the rest of the cast orbits around her.  Michael Kosko is convincingly guilt ridden yet emotionally mature and approachable.  His attraction to Sherry is especially well done, understated but obvious.  Mark Collins is the adult in the room, chastising Sherry for a poor decision.  Collins nails a scene where he is on the phone, trying to cancel a magazine subscription for his late wife.  I’ve had similar experiences, but without the comedic twists.

Christine Shutt plays Sherry’s depressed sister Grace with a sad sack brilliance.  Shutt’s obsession with Troy, her estranged boyfriend, is as painful for the audience as it is for her character.  She is particularly entertaining when she gets revenge on Troy by sneaking into his apartment to steal whatever she can carry out.

Despite my reservations about the script, it’s worth noting that Rosenstock makes excellent use of a couple of cultural references (the film Top Gun and the Beatles song Norwegian Wood).  Both are used to excellent effect, adding context to several important scenes.  Given the copyright issues, playwrights rarely incorporate other media into their scripts.  Rosenstock has taken on the copyright fight and the script is better for doing so.

Director John Ashton has pulled off a casting coup with the relatively unknown McGowen, but I don't think she'll be unknown for long.  The lighting is well done (except for one flickering light), and the sound design brings the Top Gun soundtrack seamlessly into the story.  Stuart Barr's set design is detailed and functional, but near the end of the show he pulls out all the stops.  His "shoe closet" set is beyond beautiful.

Tigers Be Still is an entertaining script, albeit a tad too ambitious.  The Avenue Theater’s production, anchored by McGowen, is first rate.  Ms. McGowen’s performance is exemplary, and she’s supported by a capable and talented trio of actors.  Catch Tigers Be Still if you can, but don’t feed the big striped cat that is presumably still wandering around nearby.

This show is suitable for teens and up.  Parking can be difficult; there is free but limited street parking and some paid surface lots in the vicinity.  Plan to arrive early enough to circle the block a few times.

I did not mention this in the review because The Avenue Theater has no control over it.  However, there was some serious audio bleed from the neighbors at The Denver Wrangler.  The drumbeat of electronic dance music was a constant source of noise throughout the show.  This is not criticism, but simply a heads up for patrons at The Avenue Theater.  Try to tune out the intrusive music.