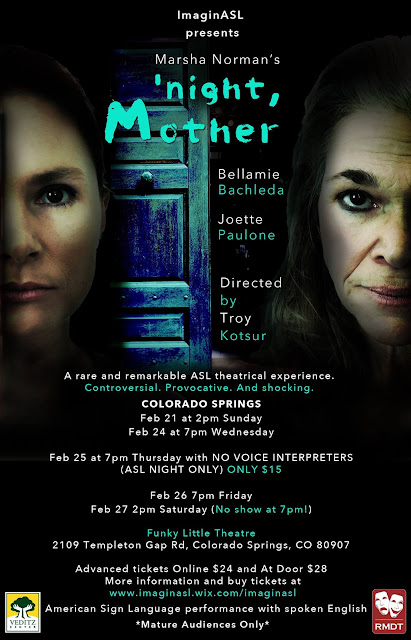 
Marsha Norman won the Pulitzer Prize for Drama in 1983 for her powerful drama ‘night Mother.  The award was well earned; it’s a disturbing story about a mother and her adult daughter coming to terms with life.  ImaginASL is now bringing Norman’s story to Colorado stages in an ambitious traveling production.

‘night Mother is a 90 minute dialogue between Jessie (Bellamie Bachelda) and her mother Thelma (Joette Paulone).  Set in their working class kitchen and living room, the story begins with Jessie tidying up the house for her mother.  What starts as just another ordinary evening quickly becomes an unforgettable turning point for both women.

Norman’s script is highly dependent on the skill of the two actors, and both Bachelda and Paulone are equal to the task.  Bachelda’s Jessie is a determined and confident woman who is taking full control of her life.  Her facial expressions are key; Bachelda nonverbally conveys all the right emotions:  frustration, despair, anger, love, and resignation.  She’s the loving daughter who rebels in the most disturbing manner possible, yet we completely understand and sympathize with her decision.

Paulone is the distraught, exasperated mother who sees her daughter slipping away from her.  Anyone in the audience who is a parent will recognize the fear in her eyes.  It’s a quiet, piercing terror; losing a child is arguably the worst loss imaginable.  Paulone’s emotional performance will stay with me for a long time.

The first show in the run was not without some flaws; there were some problems with the voice interpretation early on.  The readers seemed out of sync a few times, and their proximity to each other made it difficult to discern who was speaking for which actor.  Even so, this is a first rate production that engages, challenges, and ultimately overpowers the audience.

ImaginASL is a new arts organization, and this is their first production since merging with Rocky Mountain Deaf Theatre.  ’night Mother is a very impressive.  Troy Kotsur directs ImaginASL’s first venture, and his production is a passionate one.  Adding the ASL element accentuates the communication issues for both characters.  Kotsur is a veteran actor and director for the Los Angeles based Deaf West Theatre, and he has squeezed every ounce of emotion possible from his actors.  Their challenge is substantial.  Without speaking a single line, Paulone and Bachelda must sign an entire script.   Kotsur’s trust in his actors is justified; they team up to deliver an emotional bombshell.

‘night Mother is a show for the entire community, both hearing and deaf.  The script is not about deaf people; it’s about all of us.  We all share the daily tests of life, love, death, and loss.  Producing this script with deaf actors reminds us that while we can celebrate our differences, our strength is in the human experiences we all share.  ‘night Mother is a profound statement for every one of us.

If you miss ‘night Mother in Colorado Springs (at Funky Little Theater Company), don’t despair.  You can catch it in Denver at The Bug Theatre, 3654 Navajo Street, March 4-12, and in Boulder at the Nomad Playhouse, 1410 Quince Avenue, March 18-26.

This show has adult language and adult content.  Mature audiences.

Discretion should also be exercised for mature patrons who have had personal experience with losing a loved one by suicide.  This show could be very disturbing for anyone who is sensitive to this topic.